Witches have become popular recently thanks to American Horror Story: Coven. It seems like the perfect time for Scott Snyder to unveil his latest horror comic book series Wytches.

Snyder (Batman, Superman Unchained, American Vampire, Severed) and comic book artist Jock (Batman, Wolverine), are the creative team responsible for this new horror series. They previously worked together on “The Black Mirror” story arc for Batman. It was announced at Image Expo that they would be working together on a horror series that will prove everything you thought you knew about witches wrong (including how to spell the word, apparently). These wytches are much darker than the usual cackling hags or gothic teenager. According to the cover of the first issue, they appear to be slender creatures cloaked in shadows that only vaguely resemble human beings. 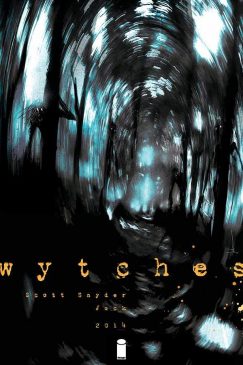 According to Scott Snyder, “I like taking classic monsters and reimagining them in a fresh, contemporary, and much scarier way.” Snyder also talked a bit about Jock’s artwork, claiming “I think his art is perfect for it because it’s so terrifying at times, the way he draws in this kind of way that’s destabilizing with its angles, and it’s also really scratchy and dark, and things are hidden in the panels and things pop out at you. It’s incredibly disturbing when he wants it to be.”

As a fan of American Horror Story: Coven I’m looking forward to seeing more witches. I’m even more excited that it’s Snyder reimagining them since he created the great “Court of Owls” story arc in Batman, which managed to have some creepy moments of its own. Though I’m very frustrated at the lack of details given about the series… but that just means there will be plenty of surprises when it finally does come out.

Wytches will be published by Image Comics sometime in 2014.