Buckaroo, Oregon is the most common birthplace of serial killers. This is our setting in writer Joshua Williamson (Ghosted, Masks and Mobsters, Captain Midnight) and artist Mike Henderson’s (Masks and Mobsters, Venom, TMNT) new horror series Nailbiter which looks like it could be a real… well, nail biter.

Nailbiter is a serial killer mystery in which FBI criminal profiler Charles Kohl plans to find out just why Buckaroo has spawned so many serials killers. But just as he’s on the verge to finding the answer he goes missing. His friend, an NSA agent by the name of Nicholas Finch, must now find his friend and solve the mystery of Buckaroo before time runs out.

The serials killers are inspired by Zodiac, Jeffrey Dahmer and characters that belong in films like Se7en, Silence of the Lambs and Psycho. I would love to see Hannibal Lector get a bite to eat with Norman Bates. What fun they could have. The name of the series was inspired by the serial killer Williamson created in the series, Edward Charles Warren, who kidnapped his victims so he could chew on their nails. When he chewed all of their nails off he would kill them. Warren is one of the sixteen serial killers who was born in Buckaroo, Oregon. 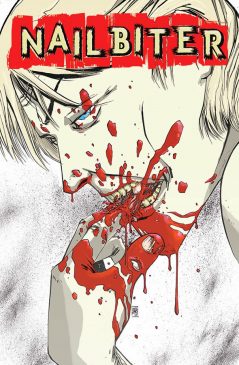 What inspired Williamson to write the series was when he talked to a women who dumped her boyfriend because his uncle was a serial killer, despite the fact that he had no knowledge of this. According to Williamson “We talk a lot of the families of the victims, but what about the families of the killers. That’s what Nailbiter is about… The people who have to deal with finding out someone they love is a murderer. Like how Twin Peaks shines a spotlight on a small town after Laura Palmer’s death, Nailbiter does the same but shows a small town after finding out a bunch of horrible killers are from there.”

I like how the focus is on the families of serial killers. It’s morbid how fascinated most of us are by serials killers (myself included) but I think the truly neglected party is their victims. You may recognize the name Jeffrey Dahmer, but can you name a single one of his victims? Then there’s the stereotype that families of serial killers are just as disturbed and are possibly even responsible for their relatives murderous tendencies. This is sometimes true but not always. Sometimes it’s just tragic, like in the case of the wives of the Green River Killer and Beltway Sniper. I’m looking forward to hopefully seeing a mixture of the two types of relatives.