At the Image Comics Expo fans were hoping to hear that Kieron Gillen (Three, Young Avengers) and Jamie McKelvie (Suburban Glamour, Young Avengers) were continuing their popular Phonogram series with a third series. Unfortunately, they were disappointed. Instead, Gillen and McKelvie announced they were going to be the creative team on a new Image comic book: The Wicked & The Divine.

I get the frustration of fans who were disappointed that they weren’t getting Phonogram 3. But they can rejoice because Gillen and McKelvie are still planning on doing a third volume called Phonogram: Immaterial Girl.

So, now that fans of Phonogram are happy, here’s what The Wicked & The Divine is about. The series sounds promising… and a bit odd. It’s very in tune with our celebrity obsessed society. In The Wicked & The Divine the gods are reincarnated every 90 years. The story is a look at superheroes from a pop culture prospective and is seen through the eyes of the gods’ biggest fan. 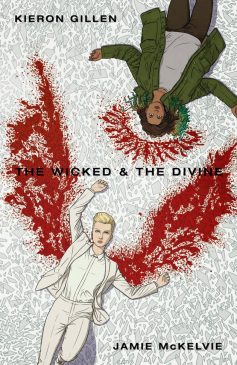 These twelve reincarnated gods are being reincarnated for two years before they all drop dead. Unlike what you would expect they aren’t fans of Superman or Batman but Prince and David Bowie. So the gods become pop stars (and superheroes) who enjoy the glory that comes with performing their miraculous feats. However, all good things come to an end and now that an unlucky thirteenth god may be reincarnated, the balance of the world may be at stake!

This ongoing series will also have guest creators and arcs that have alternate endings (try keeping continuity straight now).

Gillen shared a few words about the series: “The idea of playing superheroes as celebrity isn’t exactly new… However, it’s always played cynical. The celebrity characters are always the debased bad guys, or at least the cautionary tale and wandering from the road of truth. It’s always implicitly arguing that these people are worse than the heroes who came before them because they’re on the cover of a magazine and they do a bit of coke. We’re not interested in that. We’re anti-that. We’ve all had pop-stars save our life.”

Gillen and McKelvie did a pretty good job with Young Avengers so I’m looking forward to seeing how they will try to pull this ongoing fantasy action series off. The first issue of The Wicked & The Divine will be available in June 2014.