This March you will be patrolling with Joe Thursday and Frank Stanford in Dream Police. Join them as they go through dreams… and your worst nightmares.

The comic book series from Image Comics features the two partners traversing an alternate dimension filled with those who died while they were sleeping and are now forced to remain in the dreamscape forever. However, one day Frank disappears and Joe gets a new woman as his partner who claims she’s always been his partner. Joe must now figure out where Frank has gone. If he ever existed at all, that is.

The writer of Dream Police, J. Michael Straczynski (Ten Grand), was in part inspired by the community he created for himself after having moved 20 times before he was 17-years-old. According to Straczynski, “I’ve been fascinated with the idea that the dreamscape is a real place, stitched together from echoes of the physical world, where we go to find some measure of relief, or adventure, or understanding… If that’s the case, then there has to be some means of providing order and protecting dreamers from danger… which led me to the notion of the Dream Police.”

Straczynski promises this won’t just be a crime series.  Dream Police will explore numerous characters including “The architects (who design environments on the fly as needed by dreamers), changeling and echoes (who play the parts of people we know), nightmares (figures both frightening and deeply tragic) and others who serve a higher power” and will also continue to build the world with each issue. 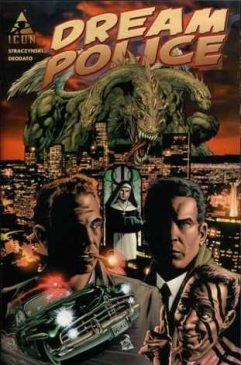 Dream Police is actually a revival of Staczynski’s old one-shot that went by the same name but was drawn by Mike Deodato, Jr. (New Avengers). The series was under the Icon Comics imprint, which was Marvel Comics Image-like imprint in that it allowed creators to keep the rights to their characters. The story also featured Joe Thursday and Frank Stafford (not Stanford) exploring the dreamscape. It also featured three stories. One about a haunted convent, another about a man named “Two-Pack” Benny who want to handle dreams and the final nightmare came from little Albert, who sicked the monster under his bed on his unsuspecting suburban neighborhood. That one-shot was published back in 2005 and it was never mentioned again… until now.

The first issue of Dream Police will become available on March 30th.  There will be two covers.  Cover A will be drawn by the artist of Dream Police Sid Kotian (Twilight Guardian) who worked with J. Michael Straczynski on Apocalypse AI and Bill Farmer.  Cover B will be drawn by Renae Deliz and Ray Dillon. I like the idea of setting Law & Order in the dream world. Hopefully, just as much focus is put on the storyline as it is the world.

Personally, I like the idea of the setting more than the disappearing partner storyline, but it is promising and I look forward to seeing where Straczynski goes with it. Unfortunately, I also think the cover of the first issue could earn a place on a Worst Cover’s list…