Buffy the Vampire Slayer has had a huge impact on pop culture and the real world. Don’t believe me? Sink your teeth into this.

Starting as a movie in 1992, then a television show five years later that ran for seven seasons and now a comic book series, Buffy the Vampire Slayer has been around for over two decades. By far the most popular of the three was the critically acclaimed television show, and it’s almost scary how much Buffy has influenced not just pop culture but academia too!

Slate did a study of popular TV shows, including the likes of The Wire, Alien, The Simpsons and a couple of other shows. Who came out on top? 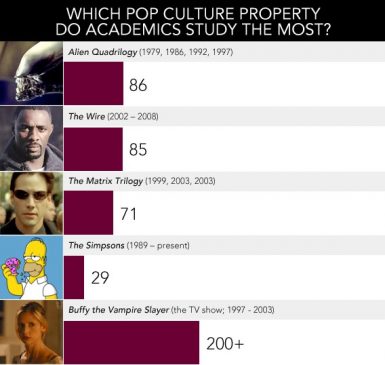 No contest. Slate found that twice as many papers, essays, and books have been written about the vampire slayer. The show even has its own journal, Slayage, which was created by the Whedon Studies Association, named after Buffy’s creator Joss Whedon (who also directed The Avengers and Firefly).

Buffy the Vampire Slayer is so popular it inspired “Buffy Studies,” a collection of scholarly writings all about the TV series. The topics ranged from feminism to the allegorical and philosophical elements in the show. It’s even been used by professors to teach entire courses about the show.

I think there are several major reasons Buffy revolutionized pop culture. For one, when Buffy first aired back in 1997 genres were pretty rigid. Buffy made use of several genres. The series was considered a drama but dabbled in several genres. There were episodes like “Band Candy,” where all the adults in Sunnydale acted like teenagers after eating band candy, which was generally comedic. Then there are truly heartbreaking episodes like “The Body,” when Buffy finds her mother dead and has to wait for the paramedics to remove her body. There were award-winning episodes like “Hush,” an episode that did the unthinkable by being completely silent almost the entire time. Popular shows like LOST and Battlestar Galactica followed in the show’s footsteps. Which isn’t surprising considering the writers of Buffy also wrote those shows. Yes, thanks to its popularity, writers from Buffy were able to land jobs they might not have gotten on without shows like Alias, Rome, and Dexter.

At the time, most television shows were very episodic. Stories usually wouldn’t carry over from episode to episode. Continuity would reset and a new story would continue. Buffy made long story arcs popular. Whedon would also make seasons more distinct by creating a different theme each year – from surviving high school in season 1 to surviving college in season 4. There would also be a new main antagonist from season to season, like the demonic Master from season 1 and the vampiric and wise-cracking Spike (accompanied by Angelus and Drusilla) from season 2. Main characters were also added, like Buffy’s sister Dawn, her new Watcher Wesley and a new vampire hunter with an attitude by the name of Faith.

Then there was the dialogue in the show. Pop culture references may be big now, but they were relatively new when Buffy and the rest of the scoobies started throwing out one-liners. These terms were later used in TV shows like Veronica Mars. But TV shows didn’t just use Buffy’s slang, they would literally talk about the show. Here’s a video that shows just some references TV shows have made to Buffy, which clocks in at over 12 minutes.

Eventually the slang even found its way into the real world. Michael Adam’s wrote an entire book, Slayer Slang, A Buffy the Vampire Slayer Lexicon, about how Buffy has influenced our language. Some examples Adams mentions are how the characters change nouns like Keysar Soze (a character from The Unusual Suspects), guinea pig and psych 101 into verbs and how characters add the word much after verbs, such as “Overestimate much?” and “Procrastinate much?” Usually the cast will make up their own words using familiar phrases, like Xander’s term ‘Guiltapalooza.’ The use of these words may have faded today but back in the day they were much more common.

Also, while I’m sure shows in the past have continued in comic book form, Buffy the Vampire Slayer seemed to make the trend more public. Now, shows like Smallville continue on as comics. Buffy’s comic book series even managed to break boundaries the show couldn’t cross, such as turning Dawn into a giant or tackling the controversial issue of abortion.

Buffy helped change pop culture. It’s impossible to say what TV would be like today if it had never aired, but one thing’s for sure: Buffy’s escapades in Sunndydale leave many fans laughing and crying at the same time.