The website comiXology, considered your number one stop for digital comics, with 50,000 comics from major publishers like Marvel and DC Comics and others, has just been purchased by Amazon.

For those who haven’t heard about the “little” company known as Amazon, they sell physical books and e-books, owns AbeBooks (a search engine and payment platform for used-book stores around the world), they have a games division in Seattle, a TV and movie studio in LA and have a Kindle Publishing program—to name just a few of the things Amazon does and owns.

The terms of the deal haven’t been disclosed by Amazon, but David Naggar had this to say: “We’ve long admired the passion comiXology brings to changing the way we buy and read comics and graphic novels.”

Amazon also revealed they will be making comiXology and Kindle work together. The company will retain the comiXology branding and support the various phone apps comiXology has.

I’m actually happy Amazon has bought comiXology. Amazon has a growing set of services available in their Kindle Publishing program. Now that comiXology has been bought by Amazon there’s a high chance that a wider audience will become a part of comiXology and with the comic book community seemingly on the decline, more members to keep this underrated literary art alive would be great! I’m just hoping they keep the free comics offered on comiXology free since that’s a great way to get newcomers to try comics.

The CEO of comiXology, David Steinberger, feels similarly about the agreement. In his open letter on comiXology he announced the news and said: 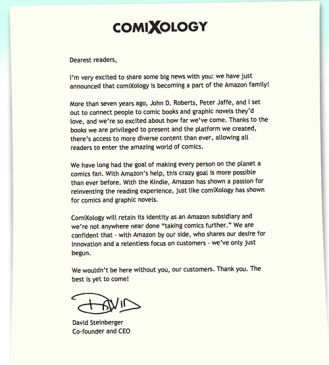 Hopefully, this will be the start of great things… and hopefully it will be heard over the recent news of Google buying Nest and Facebook buying the virtual reality firm Oculus Rift. There’s also the chance comiXology will disappear, what with Amazon owning so many diverse properties. However, I’m keeping myself cautiously optimistic about the future of the site and comic book audiences in general.