I was happily surprised by the direction this mini-series has started off in.The concept sounded like it could be hit or miss and I thought it would be comedic, but instead we get a drama that is not as action-packed as I thought it would be… and believe it or not, that’s mostly a good thing.

Four years ago assassin Mike Stone left his fiancé Chloe at the altar. Now, he’s getting married again, to a sweet girl named Denise. However, what happened after he left Chloe? Let’s just say, guns are blazing!

The first issue opens with a simple plot that unfolds into a pretty compelling story. The characters are very much defined by their actions and not their personalities, partially thanks to some mysteries write William Harms throws in. We don’t know why Chloe’s a psychopath or why Mike left her (though I’m guessing her mental stability had something to do with it) and this is a pivotal mystery. Mike’s new fiancé Denise seems nice but we don’t know much about her, and we can see why Mike would be damaged by Chloe but he’s still a straightforward assassin. We don’t know why he does what he does and we’ve yet to see him interact with anyone other than a voice on the phone, armed guards and his target. It’s the really impactful events in this issue that make us feel for the characters and not their personalities. This comic really uses the belief that we’re defined by our actions to the fullest. 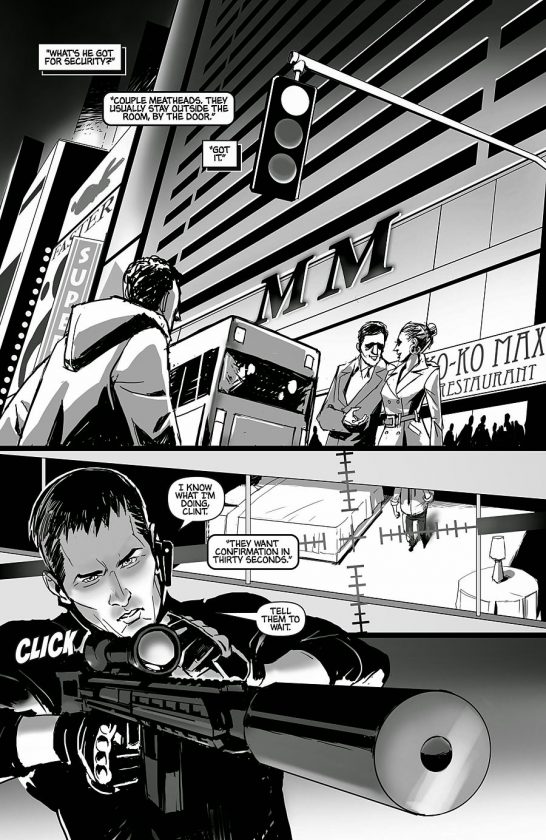 The scene between Chloe and Mike’s dad is probably my favorite. It really solidifies the conflict between Mike and Chloe. Then there’s the conversation between Denise and Mike’s mother that helps establish Mike’s character. The action scenes come second, and they’re also well done. Mike’s prowess as a spy… well, he does have over 100 witnesses see him murder something so his skills leave something to be desired… but in an action scene with an elevator he proves his skills and it is pretty intense. However, for people hoping for action every panel, you’re going to be disappointed since this is the only straightforward action sequence in this issue. The rest is heartfelt conversations… and a psychopathic bride, of course.

What makes that action scene work is Edward Pun’s artwork. I was impressed. While I didn’t enjoy his cover art, his black-and-white digital artwork really fits the tone of this story well. His character designs aren’t extremely detailed but they work. He does a wonderful job with the emotions on their faces. Chloe’s look of pure hatred at the beginning made her feel like a threat from the first panel you lay eyes on her while Denise’s kind nature comes off as much in her warm design as it does in the dialogue. 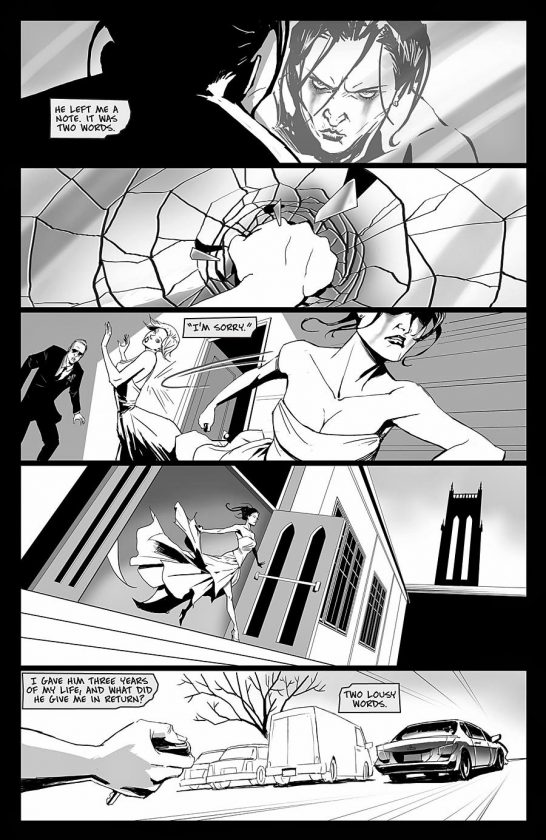 I really enjoyed some of the detailed backgrounds Pun throws in, like Mike’s mother’s place. The action scene with the elevator also felt a trippy with swirls of grey and white surrounding the elevator. There are some lines and shading that usually bug me in artwork, but here Pun somehow manages to make it work. It’s not what I would call “art of the year” but it really fits with Harms writing and enhances this opening issue. Also, for aspiring artists interested in digitally created art, Pun shares some words about his technique and in-progress pages at the end. It’s a nice little bonus.

This was a solid debut issue that pulls you into the concept quite well. The digital artwork really fits the tone of the story, which is a nice mixture of action and drama. So far, Shotgun Wedding has started off without a hitch and I’m looking forward to seeing where this story goes.