This mini-series started out strong with Shotgun Wedding #1 and it continues to build up in this issue. We get more flashbacks, more characters, more character development and even less action than the first issue.

It was four years ago when Mike left his partner in the spy business at the altar and now she’s back for revenge… which is especially unfortunate for Mike since he’s getting married to the girl of his dreams.

Writer William Harms starts this issue with another flashback. At first I worried that there were too many flashbacks to too many periods of time. In fact, while that thought continued in my mind throughout the opening, when we return to the flashback again later on in this issue it’s shown that not only was the flashback an integral part to the plot, it also adds a new dimension to the character of Chloe that goes farther than just a psychotic and jilted bride left at the altar.

Mike and Denise are also solid characters and it was nice to see them interact with each other in this issue. I would like to see them have a little more character development though, and I’m looking forward to seeing if Denise finds out about Mike’s line of work… and her reaction.

Edward Pun’s artwork continues to suit the tone of the story. However, unlike the previous issues the backgrounds don’t seem as detailed or fun to look at. In the first issue, we have a psychedelic elevator. Here, we have… bright lights. Sometimes the lighting is distracting, but it can add to the mood of the panel. The illustrations, overall, are still solid. The shadows and speedlines may be a turn off for some, but the expressions are good, the action panels without dialogue flow and I still support Pun’s decision to keep the comic in black-and-white. 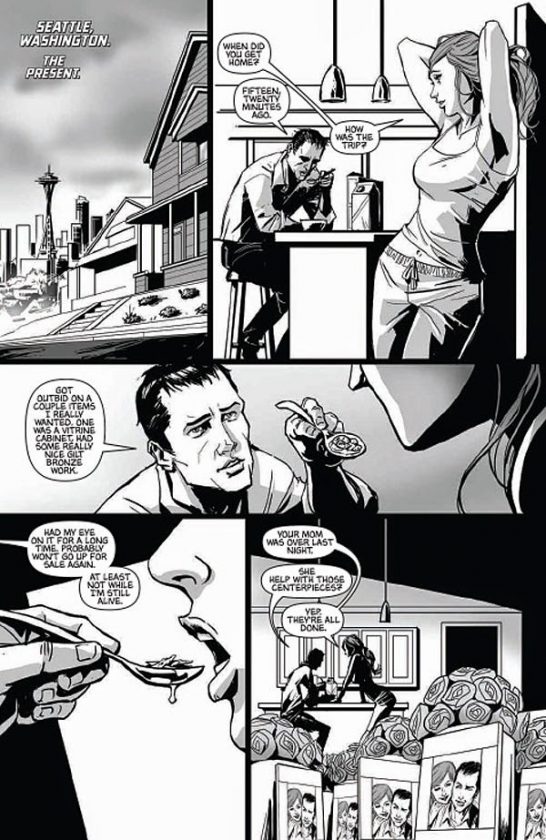 This issue does a great job developing Chloe’s character. She is clearly a threat and just like the last issue, I am craving the moment when Chloe and Mike confront each other. This was another successful step down the aisle, and I can’t wait to see what’s at the end of it!