The tension continues to build in the latest issue of the Shotgun Wedding mini-series. There are some missteps in this issue with it following the predictable pattern the series has fallen into, which basically boils down to Present Day + Past (Character Development) = Building Towards the Conclusion. Despite being predictable, it is still enjoyable.

Mike is all set to marry the woman of his dreams, Denise. However Chloe, the psychopathic spy Mike left at the altar, isn’t ready to let him go just yet.

Mike and Denise’s relationship is further developed in this issue with a flashback of how they met. This felt like a really good, realistic moment, with the two of them bonding over Mike’s father’s death and Denise’s mother being in the hospital. Later, when Mike has flashes of him and Denise together, with the help of Edward Pun’s artwork, makes for another really effective moment. 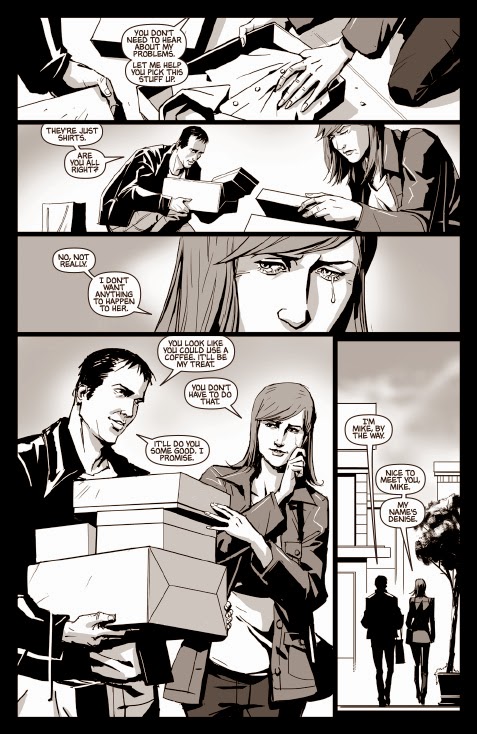 What wasn’t as effective was the pacing of this issue. It felt rather rushed and, without the moments between Denise and Mike, was just a set-up for the final confrontation that’s inevitably coming next issue. I do like how Harms explains away plot holes, such as why Mike can’t get a lot of gear or notify any authorities, setting him up as a true underdog in this story.

There were some lines that felt like unneeded fluff, like when Chloe mentions how Mike left her the night before the wedding and, in denial, she got dressed in her wedding gown the next day and was humiliated when he never came. Then, there are the additional characters added in this issue. The only one whose name I can remember off the top of my head is Tina, and there are several other people, all of which are obviously just there to be obstacles for Mike. 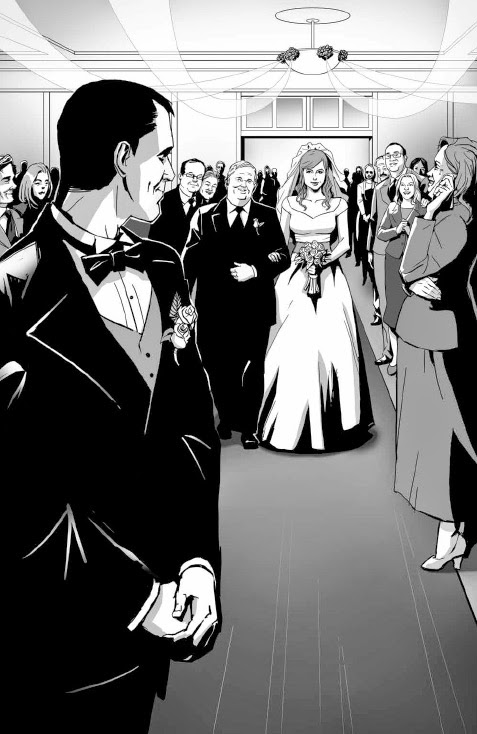 As I mentioned before with the flashbacks, Pun’s artwork continues to compliment Harms writing well. The black-and-white style Pun’s going with fits the tone and there are some really nice panels. There’s a great one with Chloe pointing her gun and you can see Mike and Denise’s reflections in the barrel. The emotions on faces continue to be strong, while the backgrounds grow more neglected.

This felt like the weakest issue so far in this mini-series, which isn’t horrible considering the other issues were really good. This issue had its moments both artistically and story-wise but felt short. It followed predictable motions. However, I can’t complain too much since the entire mini-series has been building each issue to the finale, making me very excited to see the final moments of this story.