Its been awhile since I took a look at the lackluster Batman: The Dark Knight. There are so many more Batman-related series than there need to be. The only reason this used to stand out was because there would be cameos of Justice League characters like Superman, Wonder Woman and Flash. I gave up reviewing it as of issue 6. Since then, the stories have mostly been bland and forgettable. However, this issue introduces a new villain that I have to talk about.

There have been several Man-Bat related murders lately and, after tracking down Kirk Langstrom, Batman realizes he isn’t to blame. But who is?

Unfortunately, there is no real mystery here. Almost immediately writer Gregg Hurwitz tells us who is committing these crimes as an even more powerful Man-Bat (this could be considered a SPOILER despite being included in the preview so be warned): the original Man-Bat’s father, Abraham Langstrom. 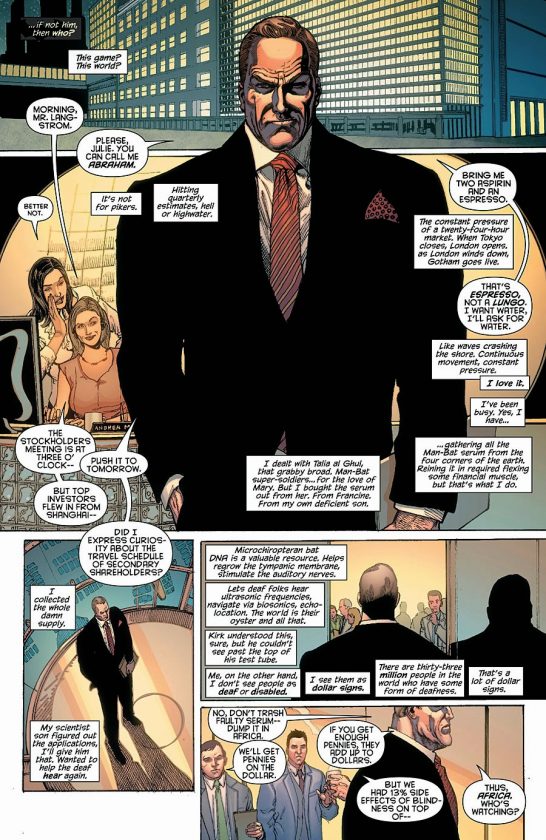 This is Langstrom’s first appearance and he’s thrown at us full force with no mystery about what kind of person he is. The idea of having Langstrom’s dad become Man-Bat isn’t very original. His wife has already become Man-Bat (Woman-Bat?) in the past.

What makes the decision worse is Abraham’s monologue. It does do a good job introducing his character, but it’s a very generic, rich-business man who literally sees people as dollar signs. He outright says this and I actually liked how blunt he was in his thoughts. Still, not very original. If it had been executed better I feel like this character would have been much stronger. Also, prolonging the mystery would have made it more compelling. The scene following Abraham’s evil inner-monologue is Batman figuring out he is Man-Bat. At the very least, this moment should have come beforehand.

The greatest moment in this otherwise mediocre issue was the conversation (though it’s more like a confrontation) between Abraham and his son Kirk. If I ever make a Top Ten Worst Comic Book Dads list, after only an issue I feel like he would earn a place on it. His dialogue is venomous towards his son and he says he isn’t against killing him. 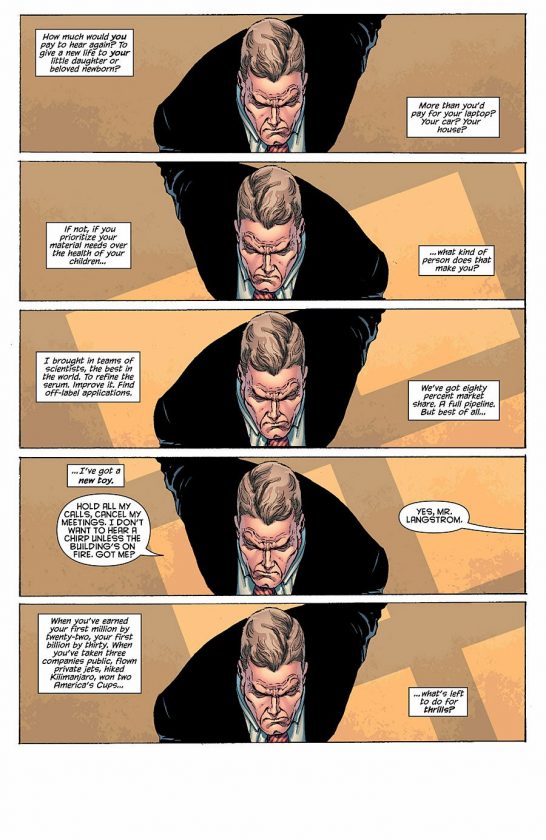 The artwork by Ethan Van Sciver is also not used well. The art itself is solid, but that does not make up for the fact that what is being drawn is boring. For example, there’s a page worth of five panels that shows the same image of Abraham Langstrom doing push-ups. Then, a couple pages later, there’s a couple of panels shared between Batman and Alfred where they barely move. I found myself reading the dialogue without glancing at the pictures much. A good comic should be able to weave the two together. Instead, I feel like there are several pages that are a waste of space.

The story feels like a repeat of the previous Man-Bat stories with a new and promising character that wasn’t executed very well but still had his moments. Abraham’s blunt nature makes me want to enjoy his character. I just wish the story was executed a bit better. I’m hoping he will be redeemed in the next issue, which is also the final issue of Batman: The Dark Knight.