Daniel Corey (Moriarty) tries to make this crime noir fresh and new by setting it in space. Can he pull it off or will the reader instead be trapped under a tirade of narration?

After a Civil War among galaxies, Detective Cal Talmage is put in charge of finding a missing ambassador’s daughter in Mars Central, also known as Red City. However this simple “babysitting” job is much more complicated then it seems with gangsters and political conspiracies popping up. Red City may be the site of another war.

It seems all the crime tropes are present. We have a murder investigation, a mysterious femme fatale, an oppressive city (in this case, city in space) an (debatably) innocent wrongly accused of a crime and the protagonist of the series is an anti-hero. There are gangsters, dingy bars and more. These tropes don’t help to elevate the debut issue of Red City above average though, but the anti-hero trope I mentioned comes pretty close. 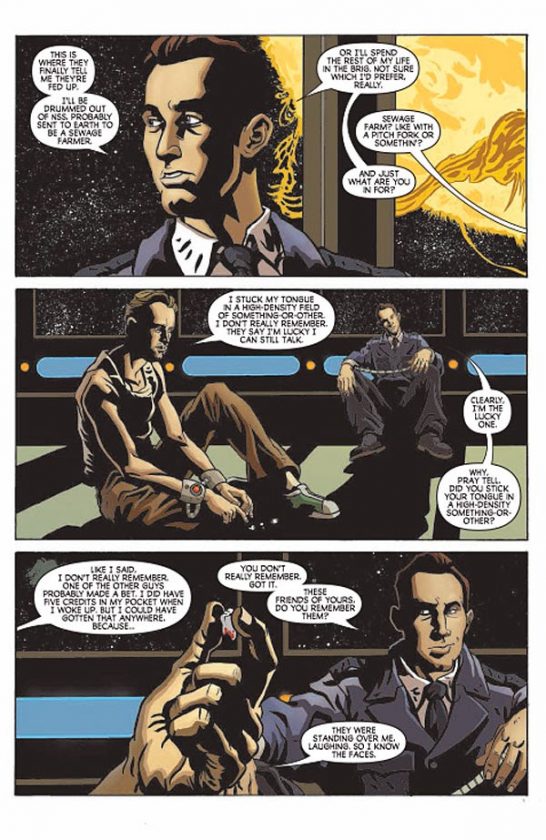 The anti-hero of the series is a former dirty cop and now a hardboiled detective. Cal Talmage is definitely entertaining. He has a lot of narration which really reflects his personality right off the bat. His humor is enjoyable and exudes from almost every line of dialogue he utters, really emphasizing his cocky attitude. No other character makes much of an impression, though the banter between Cal and his superior is memorable.

The biggest issue is Cal’s explanation of the setting. This world is very complicated. There are whole pages of dialogue explaining it and while it was interesting in the first couple of pages to hear about the Civil War, towards the end I found myself skimming the narration in boredom and confusion. It’s not just that there is a lot of it. There’s a lot of dialogue as well, but it flows better than the narration. If there was a pop quiz on the planetary history of Red City I would score poorly. 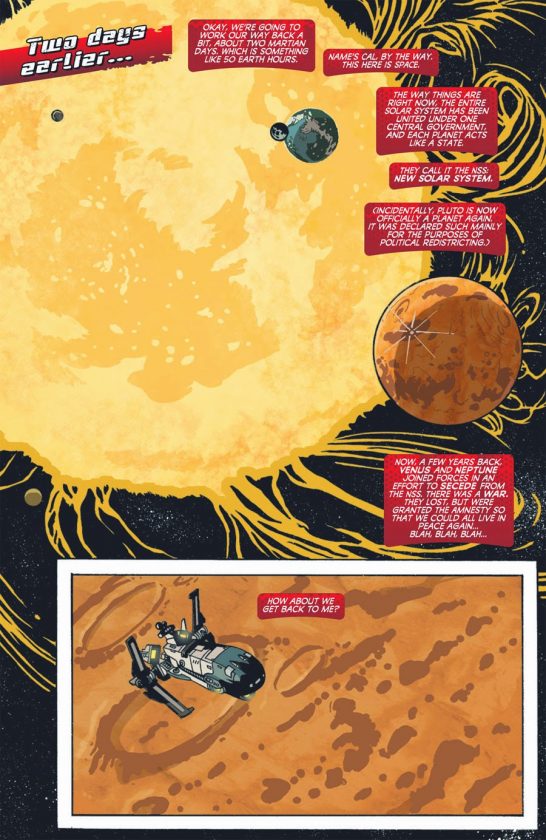 The art of Mark Dos Santos has more of an action vibe than a crime noir feel. It’s solid artwork with a lot of shading that actually works, but the character designs are nothing special. The setting should look a lot more spectacular than it does, though the decision to make the narration boxes red with white dialogue is a nice reflection of the “Red” City setting. I don’t know whether this was the decision of Santos or letterer Dave Lanphear but it was a nice touch.

This is your basic crime noir that just happens to be set in space. So far, this setting has led to an overcomplicated world and doesn’t seem to really be used to elevate the story. Only future issues of Red City will be able to show us if Corey can explain why he even bothered to send us to a planet far far away…