I’ve been spending way too much time on my phone lately. It’s not from texting or tweeting either. It’s because of Marvel Puzzle Quest, an addictive Android and iOS app that combines superheroes and bejeweled.

The game takes classic bejeweled rules (match at least three colors in a row to make them disappear) and Marvelifies it. Now, instead of aiming for a high score, you have to keep your heroes alive long enough to get your opponents hit points to zero. The app is very innovative – at least, as innovative as you can make a game like bejeweled get. You can use up to three superheroes per bejeweled battle, each of whom has their own unique abilities that you can activate by collecting certain colors. By adding this element to the game, bejeweled becomes a much more strategic and eventful game. You have to try to get your own color while also destroying tiles your enemy’s target and also level up your characters and their abilities.

This is actually a challenging game. The computer in this game is smart (almost too smart), usually choosing the same moves I would have if I was in their position. Marvel Puzzle Quest also encourages you to have friends that play the games, since this game will often beg you to bug your Facebook friends about the game and you can join alliances to get more awards for the game’s events.

A timed event is usually going on in the game and will keep you busy. It feels like just yesterday I was fighting Oscorp and received The Hood as a reward to participating and then you can journey with Deadpool as he kills every character in the Marvel universe. (Now doesn’t that sound familiar?) I like the many prizes you can get for this event, but they usually only last for two days which is not a lot of time.

The only real problem I have with the gameplay is, if you don’t move fast enough, it will show you somewhere you can move, which I feel takes away some of the challenge of it and makes me feel cheap whenever I take the hint. Also, when your heroes’ health goes down, it does not automatically heal when you finish a match. You have to wait real time. But hey, you know a game is doing something right when I only got around to writing this review because I’m waiting for my heroes to heal up. 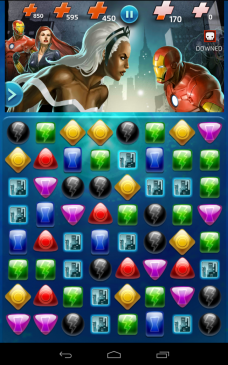 There’s also a story going on in the game about a dangerous element known as ISO-8 but really, it isn’t anything special and I usually skip it. So, if you were expecting a compelling story in-between your bejeweled fun you can forget it. Though some of the lines during events can be catchy and I give them credit for trying to include some story into such short events.

If I had to nitpick anything else in this game, it would be the music. Usually, I play Marvel Puzzle Quest with the sound off because it’s a simple monotonous beat and the constant sound effects, or just play my own music. The music isn’t bad. It has a heroic feel to it, but it gets old. It would have been nice if they’d used comic book music scores. I would have liked to hear Deadpool’s theme from Marvel vs. Capcom 3, or at least the beat. The only benefit to keeping on the sound is that if an enemy places a tile you’re going to want to destroy, it makes a little sound effect, which is useful since your eyes may start to get crossed scanning every little jewel.

While this game is free (and I give Marvel credit because I would easily pay $5 for it) there are a lot of opportunities for you to fork over your money but thankfully it’s not a requirement. The money gives you in-game currency – either gold coins or ISO-8. This can be frustrating however. It’s rare that you will get coins unless you participate in events or are lucky enough to get them when you get your free daily item (a nice perk included in the game). The reason you need the gold coins is to create space for more heroes. You can only have a few heroes to start with before you need to buy more space and you will find this quickly adding up. I already spent $5 getting more coins just so I could make space for more characters. But if you’re more patient than I am, you won’t be spending any money on this app unless you really want to.

Any gripes I have with this game are minor complaints. I’d rate it higher if it weren’t for the lack of space for characters and the lackluster storyline. Still, this is an addictive game that I highly recommend for puzzle and comic book fans. Now if you’ll excuse me, my heroes are all healed up and I’m off to murder – er, unalive Wolverine.

If you’re still not convinced, here’s an official trailer for Marvel Puzzle Quest:

And here’s Mike the Spider Slayer with his own review of the game and some tips: