​This comic opens in a world where conformity seems to be inescapable. No one is special. Your DNA is shared by millions, your emotions and thoughts are nothing new. But could Liz Wynter break society and be special? That’s what this series sets up, and it’s an interesting if somewhat confusing first step.

Wynter #1 is written by Guy Hasson, who seems to be tapping into the social media that is sweeping the minds (and phones) of teenagers away from their homework and into the virtual world. Hasson takes this literally and puts the equivalent of Facebook/Twitter into our heroine’s head. She and everyone else has an iMe. What this can do is slowly explored in the comic and can take a little while in some places to wrap your head around. You can become lost if you think too much about it.

What it boils down to is that people can literally access apps and share their findings with people who have similar thoughts/emotions through their brains. They constantly hear a voice telling them things like “‘I am special’ 2 Bil+ had same thought in last 30 seconds. 10 Bil are seventeen like you. Would you like to know who they are?” This is repeated several times throughout this issue. The repetition may irritate readers but I think that’s the point Hasson is trying to make. Unfortunately, it is still irritating. The iMe is a fascinating feature and readers will be very interested and immersed in this technologically advanced world. 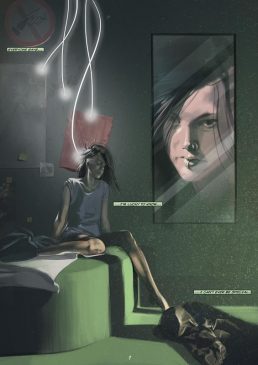 It’s creepy how close the world of Wynter comes to feeling like our everyday society and I’m much more interested in it than the overarching story which is still shrouded in so much mystery at this point. It does feel awkward that in their society they make up curse words. Just like shows such as Battlestar Galacta use frag instead of another f-word, Wynter uses forn. I don’t think this is really necessary and it sounds rather odd.
​
​The story revolving around this technology is interesting and the cliffhanger at the end leaves you both frustrated for and at our protagonist. She may be unlikable and frustrating at times, but I really enjoy her.  Liz Wynter is crude and will be making some really stupid decisions. However, there is something oddly charming about how blunt she is, if you aren’t too busy being insulted by her or aren’t a fan of blatant sexual situations that didn’t really need to be there.

Aron Elekes has some very creative and pretty art but it can be hard to follow. However, the punky character designs suit our main protagonist Liz and her best-friend Shane well. The backgrounds are an acquired taste but I feel like they fit Wynter. They’re simple pastel shades and rarely have any detail. The colors can feel lackluster and boring but I feel like that adds to the mood. The only out-there color was the green in the opening which was unnecessary and didn’t seem to fit the background.

This will not fit every reader’s tastes since many of its aspects (the repetitive iMe, the sometimes unlikeable protagonist, the crude situations/language, and the pastel backgrounds) may not charm people. However, after reading it a couple of times I have really become interested in this disturbing world and story. This is definitely a comic that is a product of its time. Teens who enjoy social networks in what today is considered a “narcissistic era” where everyone feels special could appreciate this comic and I’m looking forward to seeing where it goes.
I give this comic a 7.5/10.