Sometimes first impressions can be right, and in this case Father’s Day #1 lived up to its preview. There is some great conflict, a good fight scene towards the end and a nice beach, but you may be drowning in too much exposition to care.

Silas used to be a notorious mob enforcer. He gave up that life and was forced to give up his wife and daughter as well to keep them safe. Now, decades later his daughter Denise tracks him down and unwittingly leads the mob right to him. But which will be more difficult – escaping the mob or reconnecting with his daughter?

One big downfall of Father’s Day #1 is that writer Mike Richardson leaves no mystery. Right away the dialogue between Silas and Denise is layered with exposition. Everything is laid out for you. There’s no mystery as to why Silas is being hunted. We know his past and it may have been more effective if it was shrouded in mystery. Now, the only thing I’m curious about is how Denise learned to wield a frying pan like that… This “frying pan” was part of a great action scene that leaves me with some questions. 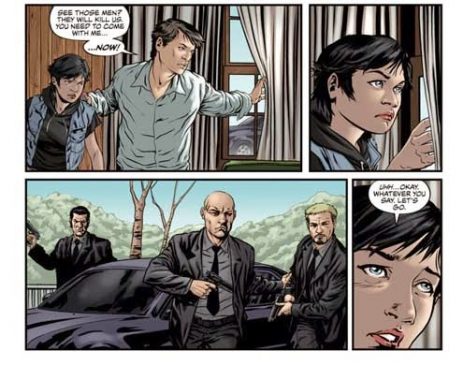 Silas felt kind of flat as a character for me. He seems like a caring guy who has heroic traits with a dark past but he’s too busy giving back-story to get much character development. However, Silas and his daughter have a great conflict that readers can also feel somewhat conflicted about, depending on whose side they’re on. On one hand, Silas gave up his family so they could survive. His actions are understandable. However, he is responsible for becoming involved with the mob in the first place. Also, Denise has grown up without a father and she has no idea why, so for decades she’s probably believed he’s just a deadbeat dad. That’s not an opinion likely to go away, even after almost being blown up.

Denise’s skills are one of the positives in this debut issue. She can be annoying at times when she confronts her father. It’s cathartic to see her punch the man who ran off on her family but at the same time frustrating because you just know she’s inadvertently alerted the wrong people about where her father is and that she and Silas are in grave danger. I also like Denise’s character design. She dresses in a realistic and practical way and looks like a college student. I even like her pretty pink and blue feather earring. It actually took me a second read-through to even notice it, which made it feel like a neat little detail. It’s nice how the artist went the extra mile to include it. 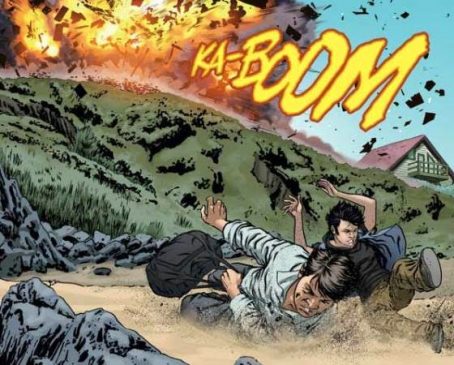 Gabriel Guzman’s artwork is decent and he has some nice scenic beach backdrops, but it all felt like very standard art. Guzman is good at making his characters very expressive but sometimes he puts too many lines around Denise’s eyes and it looks like she has crow’s feet. Also, when he isn’t using a scenic backdrop Guzman often resorts to a light brown color or, even worse, pure white. The colors of Java Tartaglia serve their purpose just fine except for these background guffaws. Nothing art-wise is really poor, it just doesn’t have much flare to it. Plus, some of the action had those “dreaded” speedlines everyone loves to hate, though they didn’t detract too much from the action.

I always like seeing a family angle, since it’s a road less traveled in comic books. The execution leaves me wanting, but the interactions between father and daughter have the potential to be interesting and the fights are choreographed well. I’d like to see where they go with it. Check out a preview of Father Day #1 and my first impressions.

If you’re interested in reading about more tension between fathers and daughters, check out Kat West (aka Comic Uno’s) Kickstarter for her new comic Like Father, Like Daughter.