Marvel’s getting prosey in 2015. Over the past year, Marvel released their first original prose novel, Rocket Raccoon & Groot: Steal the Galaxy! Now, Avengers, Ant Man and Deadpool are getting in on the novel action.

Avengers: Everybody Wants to Rule the World 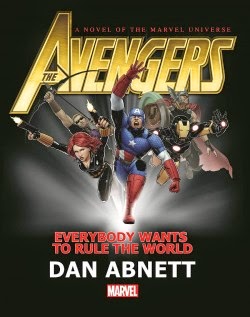 Dan Abnett, the best-selling writer behind Rocket Raccoon & Groot: Steal the Galaxy! is planning on writing another original novel set in the Marvel Universe, Avengers: Everybody Wants to Rule the World. In this story, the avengers are scattered across the globe fighting some of their deadliest enemies. Captain America fights legions of Hydra in Berlin; Black Widow and Hawkeye take on the Savage Land; Thor fights an army in Siberia; Hulk and Nick Fury form an unlikely team in Mangapore; and Iron Man fights Ultron in Washington.

Abnett talked about his decision to turn the Avengers into a novel, commenting that “When Marvel suggested writing a Guardians or Rocket related novel to coincide with the movie, it appealed… But I realized that it would be a far more interesting challenge and the result might be better if I gave them an original story. Far more freeing. A story you write for a comic strip is specifically designed to fit into a comic strip. There were things that I wanted to do with a novel that suited that form better. Marvel thought it was a good idea. It was one of the most fun jobs I can remember in a long time, with that combination of action and humor and Marvel lore—referencing continuity and Easter-egging. So, I really enjoyed it and it seems to have gone down really well. Marvel was so pleased they’ve come back to me for more.”

I love the idea of having multiple enemies in the novel, which Abnett also went into further detail about, saying “The Avengers aren’t just taking on one of their classic foes, which would make a great novel in itself,” says Abnett. “They’re taking on multiple classic foes at the same time in a desperate scramble. They have to sub-divide to meet these threats, threats they’d normally have to stand together to deal with. And while they’re contending with Hydra and A.I.M, they’re sort of going, ‘Why is all this happening at once?’ Everyone seems to be making this mad grab for the Earth, and of course, that’s the point. There is something at stake, something motivating all these villainous entities to act at the same time.”

Having the team separated seems like a wonderful opportunity to get to know the characters as individuals more. And, of course, that makes the moment when they finally assemble together all the more climactic. 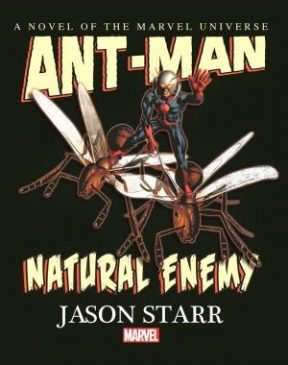 The next novel to come out will be starring Avenger’s member Ant-Man. The writer will be Jason Starr (Twisted City, Wolverine MAX). An interesting decision that I think is bold of Starr is that the Ant Man in the novel will not be the original Ant Man, Hank Pym, but Scott Lang, the other man who donned the antenna of Ant-Man. He is an ex-con and has a daughter. In Starr’s story, Lang must protect himself and his daughter when a criminal from his past comes after him—or is he after the technology of his alter-ego Ant-Man? Lang—and readers—will find out in Ant Man: Natural Enemy.

I enjoyed this Ant Man because of his daughter. Often, superheroes are swingin’ bachelors and they don’t have families, which makes the characters that do all the more interesting—and gives them all the more to lose. 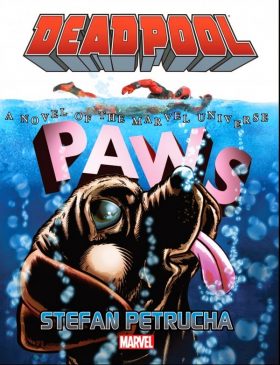 The other novel coming out is Deadpool: Paws. This original story will be written by prose and comic book writer Stefan Petrucha (Teen, Inc. and X-Files). In this off-the-wall story, dogs are becoming bloodthirsty killers and Deadpool needs to take care of them. Unfortunately, the Merc with the Mouth is conflicted, for he is a dog lover and doesn’t want to kill them.

If only they were people….

I can see why this is in novel format. It’s fine to show gruesome images of people getting killed. But dogs? PETA wouldn’t like that one bit!

As a fan of novels as well as comics, this is a match made in heaven for me. I will miss the colorful panels, but a Marvel prose novel is promising and I really like the fact that these are not re-tellings of comic books but original stories. Avengers: Everybody Wants to Rule the World will be released in April 2015. Ant Man: Natural Enemy reaches book shelves on June 3rd, 2015 and Deadpool: Paws will be released on August 5th, 2015.

What comic book character would you like to see novelized? Let me know in the comments below.