Recently, Batgirl went through some creative changes. Longtime writer Gail Simone, who had previously been fired from the series and was then put back on the series thanks in part to fan backlash, has finally left the series and was replaced by a new creative team: Cameron Stewart, Brenden Fletcher and Babs Tarr. Their run has, until this moment, been praised as contemporary and feminist that seemed perfect for a young progressive female audience. Then Batgirl #37 happened.

In Batgirl #37 someone is going around dressed as Batgirl in sequins, helping criminals and posing for photos in Batgirl’s hometown of Burnside. The imposter was revealed to be (SPOILERS) a male artist by the name Dagger Type. When his identity is revealed, his features are distorted and his make-up ruined. Worse is Batgirl’s reaction to him, as in shock she says “But you’re a-” clearly meaning to say “man” but is cut off by a bullet.

The issue was considered transphobic and transmisogynistic, with this panel cited in particular: 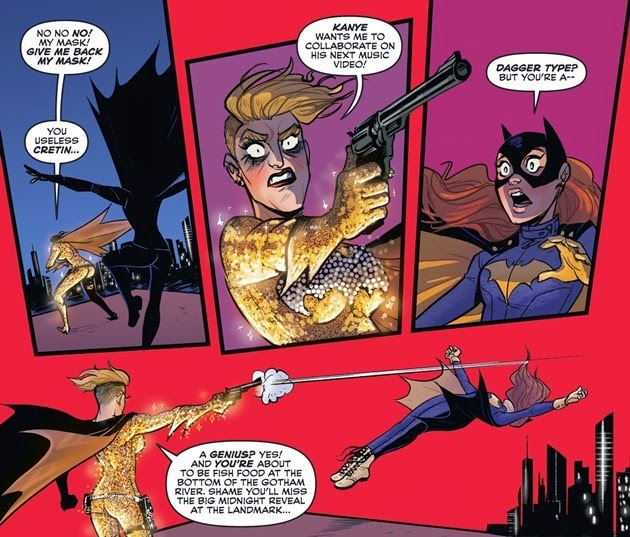 I think Mey wrote it best as to why this issue is problematic:

“Why does she assume he’s not trans? If you pull the wig off of someone who you thought was a woman, it is 100% transmisogynistic to yell in shocked horror that they are a man. If Barbara didn’t know any trans people or have a shown history of being a great trans ally, this behavior might make sense (although it would still be offensive). However, that’s the exact opposite of what the case is. I mean, just imagine if Alysia Yeoh had seen Barbara react this way. She would have sat her down and called her on her bullshit… All of this isn’t even bringing up the fact that both the “deceitful trans woman” and the “villainous trans woman” are dangerous tropes that feed transmisogyny and anti-trans violence.”

I highly recommend reading her full article on Autostraddle entitled “How “Batgirl #37″ Undid a Year and a Half of Positive Trans Representation in a Single Page (Updated)”. Dagger Type doesn’t even appear to be trans, just dressing the part of Batgirl as a form of performance art. There is a longtime trope in movies of men dressing as women to commit crimes.

What makes this moment of discovery stick out more is the fact that if you’re a longtime reader of the series, you know Batgirl would not act this way. A couple years ago, this series was praised because of Batgirl’s reaction to her roommate, Alysia, telling her she is transgender. Barbara doesn’t even miss a beat and rather than be shocked, embraces Alysia. 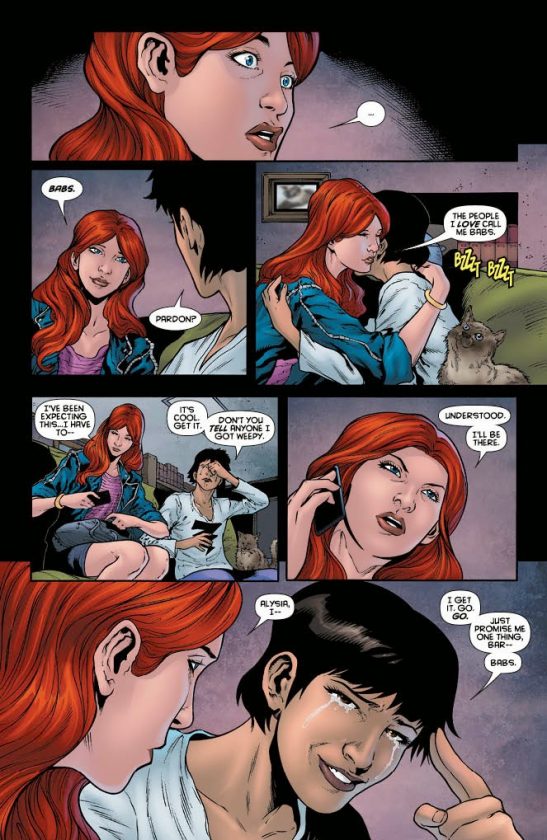 Batgirl #37 is the third issue featuring this new creative team and I have a feeling they will be walking on eggshells for a while after this. I definitely don’t think they meant to be transphobic, but this is definitely an issue. The creative team did not immediately respond about this issue until Saturday, when they issued an official statement of apology, pictured in full below: 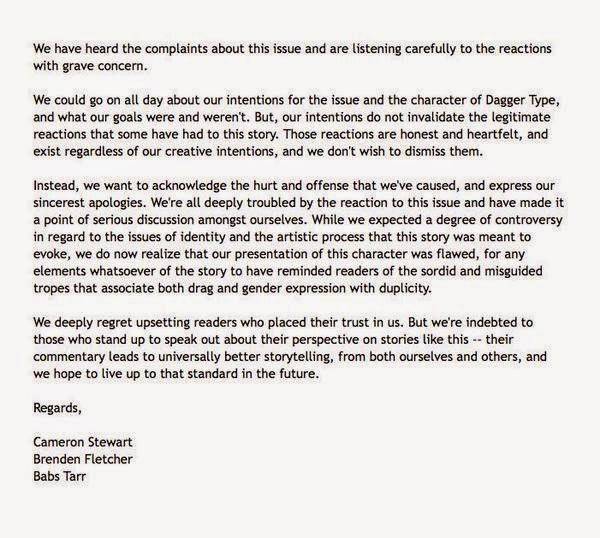 Regardless of their apology, which I do feel is genuine, there needs to be a better and bigger representation of transgender characters in comics. I hope characters like Alysia have a bigger presence in the Batgirl book and in other titles as well.