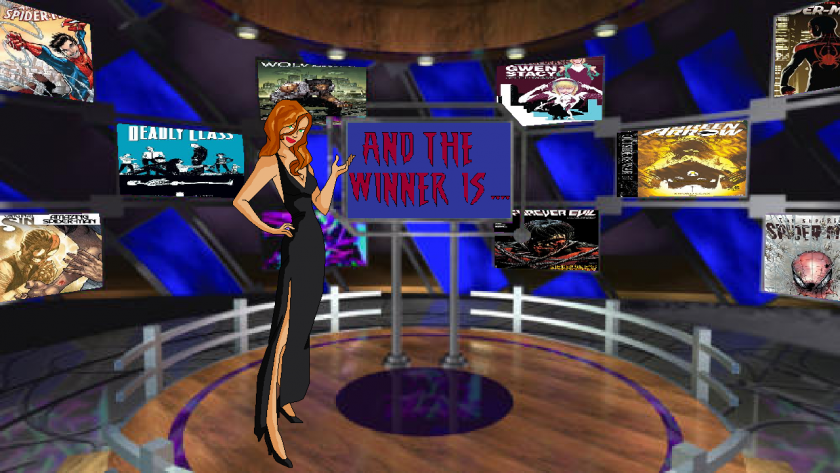 In case you forgot what happened in every book here is your cheat sheet!

AMAZING SPIDER-MAN #1
The Greatest Super Hero of All Time RETURNS! The world may have changed since Spidey’s been gone, but so has Peter Parker. This is a man with a second chance at life, and he’s not wasting a moment of it. Same Parker Luck, new Parker attitude. Putting the “friendly” back in the neighborhood, the “hero” back into “super hero,” and the “amazing” back into “Spider-Man!” Also returning: The recharged and reenergized ELECTRO
Written By: DAN SLOTT
Art By: HUMBERTO RAMOS
Cover By: HUMBERTO RAMOS
ON-SALE 04/30/14

AMAZING SPIDER-MAN #4
The radioactive spider that gave Peter Parker his powers bit someone else, too! Who is Silk and where has she been? Don’t miss this incredible new character who will be a major Spider-player for the whole year!
Written By: DAN SLOTT
Art By: HUMBERTO RAMOS
Cover By: HUMBERTO RAMOS
ON-SALE 07/23/14

DEADLY CLASS #1
It’s 1987. Marcus Lopez hates school. His grades suck. He has no money. The jocks are hassling his friends. He can’t focus in class, his mind constantly drifting to the stunning girl in the front row and the Dag Nasty show he has tickets to. But the jocks are the children of Joseph Stalin’s top assassin, the teachers are members of an ancient league of assassins, the class he’s failing is “Dismemberment 101” and his crush, member of the most notorious crime syndicate in Japan, has a double-digit body count. Welcome to the most brutal high school on earth, where the world’s top crime families send the next generation of assassins to be trained. Murder is an art. Killing is a craft. At King’s Dominion high school for the deadly arts, the dagger in your back isn’t always metaphorical, nor is your fellow classmates poison.
Written By: RICK REMENDER
Art By: WESLEY CRAIG
Cover By: WESLEY CRAIG
ON-SALE 01/22/14

IT’S THE BEGINNING OF THE END – 3 MONTHS TO DIE ENDS HERE! • The beginning of the end is now here … THE DEATH OF WOLVERINE! • THREE MONTHS TO DIE, the loss of Wolverine’s healing factor–all led to this, the single most important X-Men event of the decade. • Logan has spent over a century being the best there is at what he does…but even the best fade away eventually. • Over the years, Logan has been a warrior, a hero, a renegade, a samurai, a teacher—and so much more. But now, the greatest X-Men hero will play a role he’s never played before in this special weekly event brought to you by industry superstars Charles Soule and Steve McNiven.
Written By: CHARLES SOULE
Art By: STEVE MCNIVEN
Cover By: STEVE MCNIVEN
ON-SALE 09/10/14

EDGE OF SPIDER-VERSE #2
In one universe, it wasn’t Peter Parker bitten by the radioactive Spider, but Gwen Stacy! She’s smart, charming and can lift a car– Just don’t tell her Police Chief father! How is she involved in Spider-Verse? Seeds of AMAZING SPIDER-MAN #9 are planted here!
Written By: JASON LATOUR
Art By: ROBBI RODRIGUEZ
Cover By: ROBBI RODRIGUEZ
ON-SALE 09/17/14

FOREVER EVIL #6
The final fate of Nightwing! The most unlikely of allies have set the Crime Syndicate in their sights — and they’re playing for keeps while the life of a hero hangs in the balance! Plus, the identity of the mysterious man in the hood is finally revealed!
Written By: GEOFF JOHNS
Art By: DAVID FINCH
Cover By: DAVID FINCH
ON-SALE 03/05/14

GREEN ARROW #30
“The Outsiders War” Part 5! Arrow and Robert face a mob of Outsiders. It looks bad…but the cavalry is about to arrive in the form of Katana, Butcher, Magus and Kodiak! Will they be in time to save the day?
Written By: JEFF LEMIRE
Art By: ANDREA SORRENTINO
Cover By: ANDREA SORRENTINO
ON-SALE 04/02/14

MILES MORALES: ULTIMATE SPIDER-MAN  #1
PART ONE OF THE BIGGEST SPIDER-MAN STORY OF THE YEAR “REVIVAL”! • MILES is back in action with a new status quo and a new outlook on life! • A BIG BIG BIG villain from PETER PARKER’s past is alive and well and about to turn New York upside down! • The last page will have ULTIMATE SPIDER-MAN fans SCREAMING! • This issue can’t be missed!
Written By: BRIAN MICHAEL BENDIS
Art By: DAVID MARQUEZ
Cover By: DAVID MARQUEZ
ON-SALE 05/07/14

SUPERIOR SPIDER-MAN #30
“Goblin Nation” – Part 4 of 5 Since the start of DYING WISH, it has ALL been building to this.One of the most important moments of the ENTIRE Superior Spider-Man Saga!Once this happens, it CANNOT be undone!DO NOT MISS THIS ISSUE!
Written By: DAN SLOTT
Art By: GIUSEPPE CAMUNCOLI
Cover By: GIUSEPPE CAMUNCOLI
ON-SALE 03/26/14

Let us know what you think in the comments here and on Comic Book Corner 2.0 for Mike Spider-Slayer’s Comic Of The Year 2014 – Goes To…. and don’t forget to follow us on Twitter for the latest Previews, Reviews, News and Interviews.