Tired of the numerous story arcs Batman series have been entrapped in issue after issue? Here’s a great one issue story that should get you shivering a bit.

With all the chaos going on in Gotham, no one has noticed the “nobodies” going missing—the homeless, ex-cons—dozens disappearing. Now, Batman is on the case. But is it too late?

The story of Batman #34 is by Gerry Duggan and Scott Snyder but the writing is credited to Gerry Duggan. Despite Duggan being known today more for his work on Deadpool, this is not a humorous story in the slightest.

I like the fact that this is a one-shot story. With so many long, complex arcs going on in the Bat-Universe right now, this is a nice break. Also, unlike many one-shots, the pacing of this story does not feel rushed at all. We get a complete tale and I was satisfied at the end. Every moment is implemented to its fullest and Snyder and Duggan even manage to sneak in a two-page spread that recaps the recent events in Batman’s series—though it may be somewhat unclear to readers that this story is supposed to take place sometime after Batman Eternal, which is a bit of a buzzkill since it takes away from the suspense of how Batman Eternal is going to end. Clearly, Batman is going to be too traumatized or killed (or, if he is, he came back pretty fast this time!). 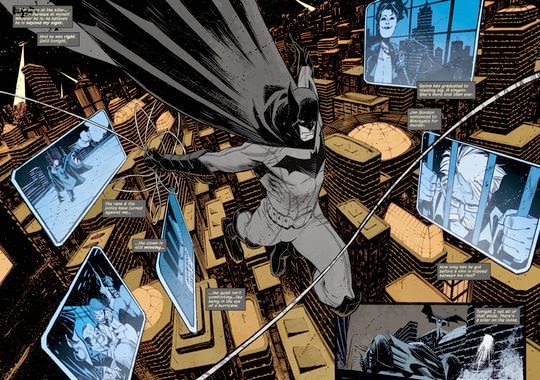 Another surprise was how great and refreshing the villain was. He wasn’t a colorful character like Joker or Poison Ivy, he’s a normal guy—well, “normal” is stretching it, but he is just a small-time guy who has gone on killing people for years.

Towards the end we get a brief appearance from Eric Border, a member of Arkham’s staff who was first introduced in Batman Annual #2. I like this character, especially after reading Batman #36, but we’re not there yet. Here he serves a minor purpose plot-wise that leads to an almost poetic, creepy ending. This ending is all the more enjoyable after having read Batman #36.

Matteo Scalera’s artwork was solid throughout. It has a gritty, dark style that really fits the mood of this issue. The one moment that stood out to me was the final full page spread which is pretty gruesome and really hits home the gravity of the situation.

If you need a break from the various story arcs going on in Batman, I recommend picking this up if you haven’t already.