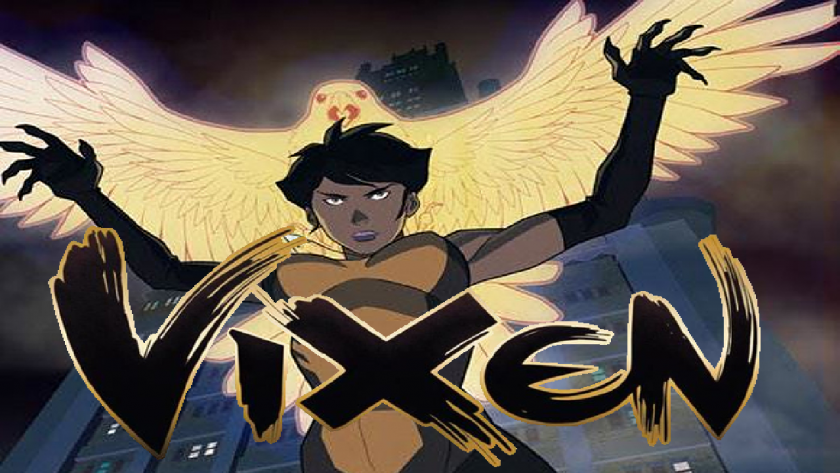 During the Television Critics Association event on January 11, 2014 a few announcements from  The CW  were made which some of those were news that eight of their series were renewed for the 2015-2016 season including Arrow (Season 4) and The Flash (Season 2), but that isn’t the only news that would impact  The CW ’s shared universe. It was also announced that the superhero Vixen will be joining the boy’s club in an animated series via  The CW Seed , the network’s online platform for original digital content. 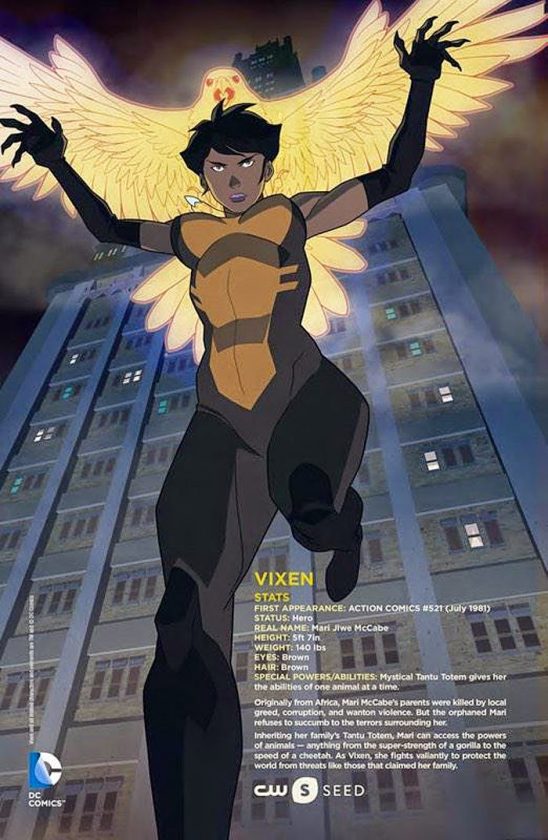 The Executive Producer of Arrow, Marc Guggenheim stated that the series is initially planned for six episodes, and will be set in Detroit as a homage to her roots as a member Justice League Detroit in the 1980s. Vixen will bring a new element to the universe that the two shows have already created with Arrow being the more street/crime-based and The Flash being the more science/metahuman-based, Vixen will be the mystical/magical-based series. 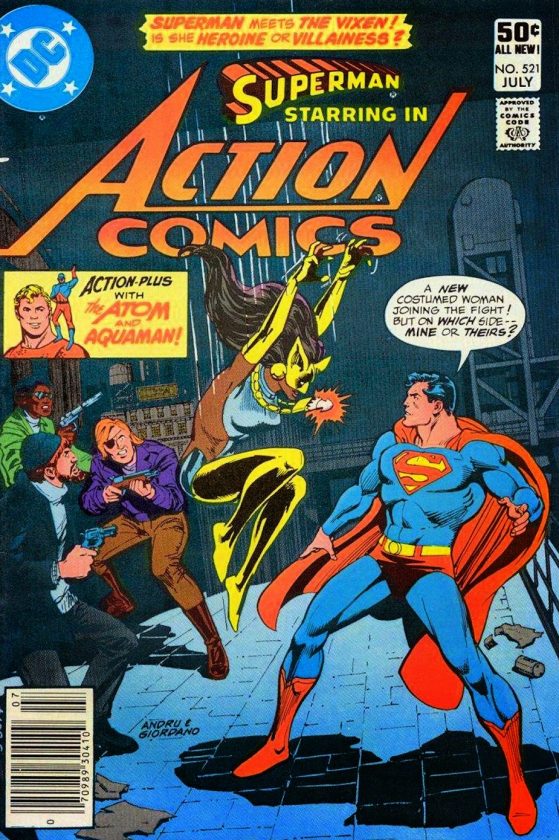 Vixen also known as Mari Jiwe McCabe debuted in Action Comics #521 (July 1981), and was was created by Gerry Conway and Bob Oksner. Mari grew up in the small African village in the fictional nation of Zambesi, M’Changa province. Mari’s mother had told her daughter stories of the Tantu Totem. The totem was created in ancient Africa by it’s namesake and warrior Tantu who went to Anansi the Spider to create a totem that gives its wearer all the powers of the animal kingdom, but only if they would use the power ro protect the innocent. Tantu used the totem and became Africa’s first legendary hero. The totem was passed down through Tantus’s descendants where it reached Mari’s family. Mari’s mother was killed by poachers and her father killed by his own brother for the totem. Mari grew up and took the totem using its powers for their true purpose as the superhero, Vixen. Since her debut Vixen has been a member of the Ultramarine Corps, Checkmate, Suicide Squad, and the Justice League. 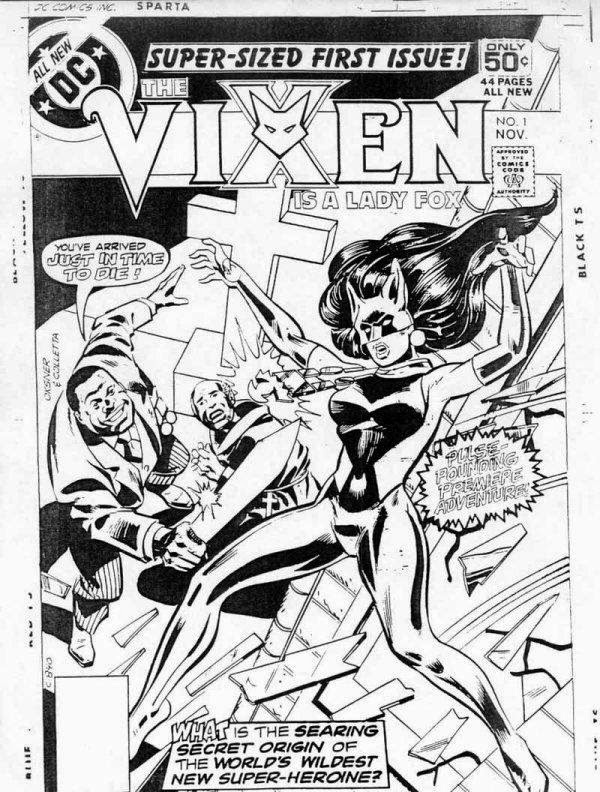 Vixen was going to be DC Comic’s first black female superhero to have her own title but was cancelled before the first issue ever saw print due to what has been dubbed the “DC Implosion Of ’78”, the story though would later be printed in the pages of a two-issue DC ashcan titled Canceled Comic Cavalcade.

Vixen made her mainstream debuted in the animated series Justice League Unlimited where she came into conflict with Hawkgirl due to Mari being in a relationship with John Stewart who had a relationship with Shayera in Justice League. The three engaged in a series long love triangle that was never fully resolved. Since then Vixen also appeared in Batman: Brave and the Bold, but  The CW Seed  show will be her first leading role. 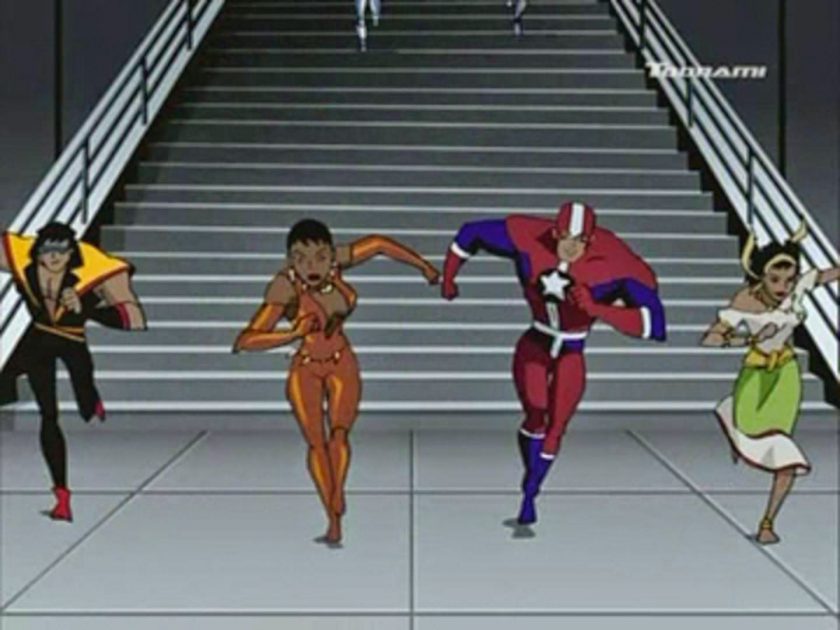 The show should premiere in the fall with Brian Ford Sullivan and Keto Shimizu joining Guggenheim on the project. Few details are known at the moment including the casting of the lead character of Vixen. While Guggenheim did indicate that the The Flash and Arrow will crossover with Vixen with Grant Gustin and Stephen Amell voicing their own characters in the animated series, Guggenheim did not mention if the actress would make the live-action appearance as Vixen on either show.
. 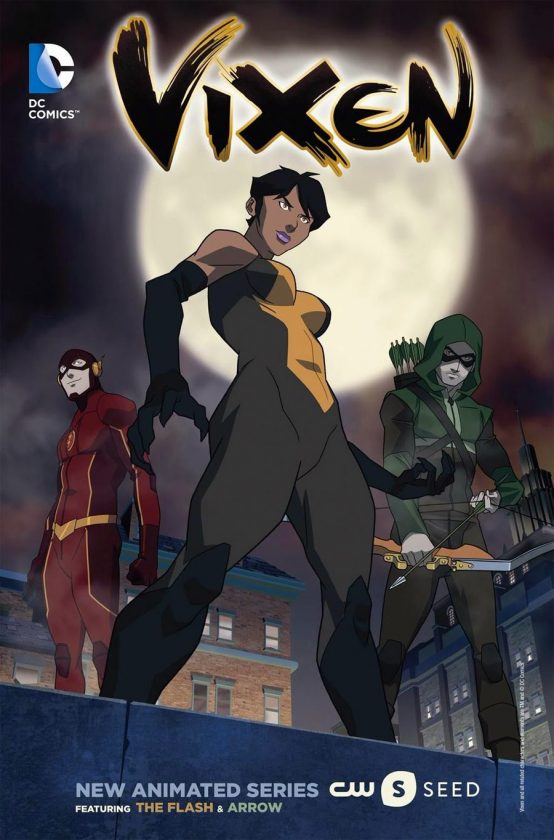 The casting and the possibility of the actress hired to voice Vixen guest-starring on either of those shows have me most curious since this is something that has never been done before. There has never been an animated series and a live action one let alone two sharing the same universe before. Another possibility with this series could be the beginning of a new animated universe for DC and one that would be more mature and in a similar vein as the fan favorite Young Justice. I will be keeping an eye out for who is cast as Vixen for the animated series and I am also looking forward to seeing the new series. Kat Comic Uno also gave her opinion on this news in a Topic Video check out her thoughts on the series and the impact it could have.