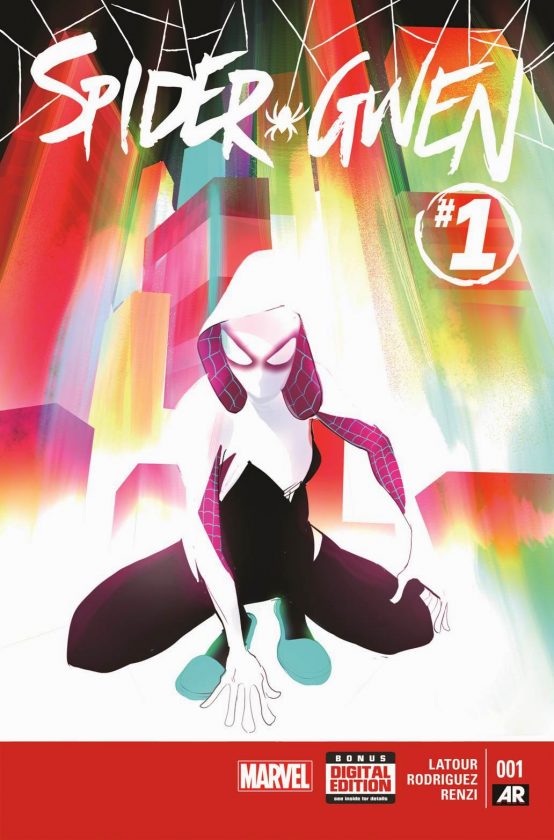 She’s Back! Your First Look Inside SPIDER-GWEN #1!

This February, Marvel’s newest, sensational Spider-Woman is coming back to comic shops in the highly anticipated SPIDER-GWEN #1! Spinning directly out of the pages of the Amazing Spider-Man’s SPIDER-VERSE and the red-hot, sold-out Edge of Spider-Verse #2, is a new ongoing series that already has the whole comic industry buzzing! Jason Latour, Robbi Rodriguez and Rico Renzi all return to chronicle the adventures of the breakout character of 2014!

She’s Gwen Stacy. She’s smart, tough, and charming. She drums in a punk rock band and goes to high school just like you. Only she can lift a car and has spider powers! Just don’t tell her father, NYPD Police Chief George Stacy! But you knew all that already! What you don’t know is Gwen is back home following the events of Spider-Verse and you won’t believe what she’s got waiting for her!

“It’s a rare character that gets the public outcry that Spider-Gwen got. From the sell-out of Gwen’s first appearance to the groundswell on Twitter we’re excited to bring more Spider-Gwen into the world with the creators who started it all!”

Now is your chance to get on board with the breakout character of the year as she makes her bombastic debut into her very own ongoing series. Don’t miss out when Gwen Stacy swings in to comic shops this February in SPIDER-GWEN #1!


To find a comic shop near you, visit Comic Shop Locator or call 1-888-comicbook.
For comics anytime, anywhere check out Marvel Comic Store and Marvel Mobile

Let us know in the comments what you think of this First Look at Marvel’s SPIDER-GWEN #1 and don’t forget to follow us on Twitter for the latest Previews, Reviews, News and Interviews!