Nailbiter is a current ongoing series about the town of Buckaroo, Oregon. This little town is the birthplace of sixteen serial killers. An interrogator, Finch, attempts to get to the bottom of this mysterious town with the help of the sheriff (and former love interest of the Nailbiter himself). Hack/Slash was a popular ongoing series featuring Cassie Hack. Cassie has appeared alongside numerous horror icons such as Ash from Army of Darkness and Chucky. A play on the girl who’s usually the victim in a slasher film, Cassie is a serial killer’s killer! Now it’s Cassie Hack vs. the Nailbiter and her partner Vlad vs. the Lucha Eliminador. 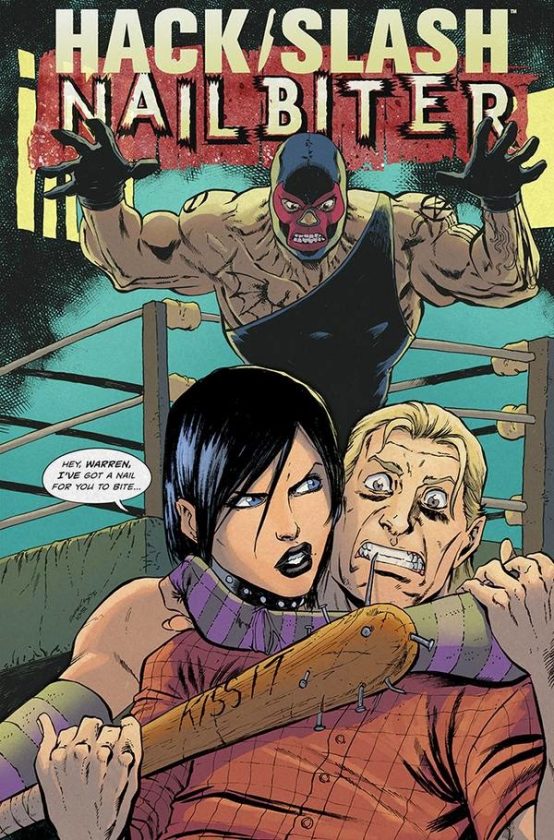 Seeley and Williamson are both fans of each other’s work, Williamson commenting that “Hack/Slash has been one of my favorite books for a long time, and once we started running with Nailbiter, I knew we were playing with some of the same tropes and twisting them. Cassie and The Nailbiter HAD to meet. Doing this flipbook with Tim has been a blast. One of the scariest and most messed up scenes we’ve done in Nailbiter takes place here. Whenever I tell people about it, I can see their skin crawl.”

As a fan of both series, I am psyched to see the madness that I’m sure will ensue in a crossover like this. I named Nailbiter the best series of 2014. Nailbiter/Hack/Slash is a 40-page one-shot that will be available on March 4, 2015.