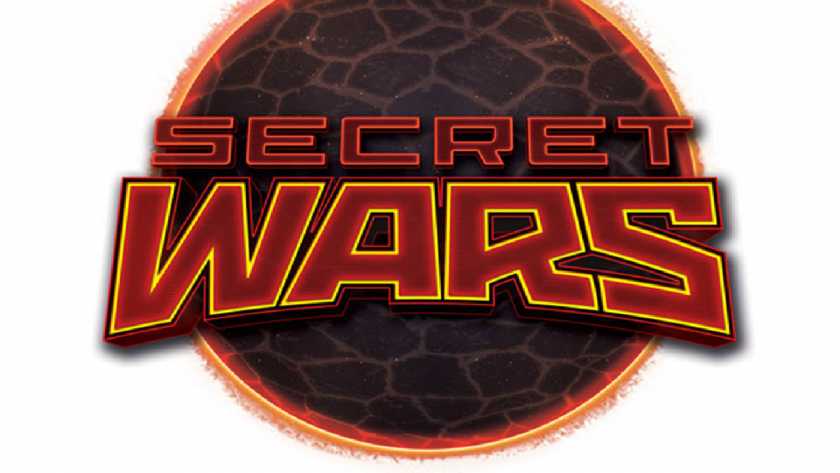 The skies go dark and the world begins to fracture. Secret Wars is coming, and with it the destruction of the Marvel Universe as we know it.  The Marvel Universe has been destroyed! One by one, each and every universe across the cosmos has been eliminated. All that exists is a new, patchwork planet made up of the remains of decimated universes. The future begins here! When everything ends, there is only Secret Wars. 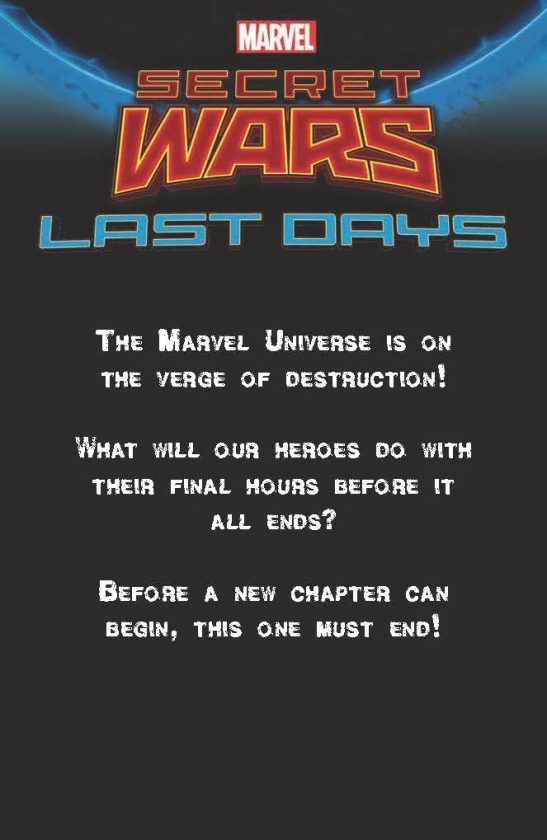 “What would you do if you learned today was your last day on Earth? That’s the question your favorite Marvel heroes are going to ask themselves in their LAST DAYS story lines as they brace for Secret Wars and the end of the Marvel Universe.”

Battleworld is set to transform the Marvel Universe as you know it. But before Secret Wars can begin, this chapter must come to a close. What will our heroes do with their final hours? What secrets will be unearthed? Who will they want to spend their LAST DAYS with?

“LAST DAYS is the first of three new brandings for series unique to Secret Wars. Each branding will bear its own unique trade dress and logo treatment, clearly defining its relationship to the main Secret Wars story. This will make it easier for fans to experience the full scope of Secret Wars. Don’t dare miss these epic tales as our heroes face their impending obliteration!”

First, Al Ewing and Luke Ross bring you a story of the people who faced the end of the world together, shoulder to shoulder in the face of destruction in CAPTAIN AMERICA & THE MIGHTY AVENGERS #8. Some of them wore costumes, and some of them didn’t. Some of them had super-human powers, and all some had were each other. Yet they were all Mighty Avengers in the end. And this is how they spent their last day.

CAPTAIN AMERICA & THE MIGHTY AVENGERS #8
Written By: AL EWING
Art & Cover By: LUKE ROSS
On Sale in May!

Then, ask yourself – what will your legacy be when it’s all over? Cullen Bunn and Javi Fernandez have the answers in MAGNETO #18. The Mutant Master of Magnetism has learned his time is all but spent. A life of struggle and torment brought to a cataclysmic end at the destruction of all things. With everything he’s fought for his whole life brought to its unavoidable ending, how will he cope? Will he celebrate his legacy – or be tormented by it?

MAGNETO #18
Written By: CULLEN BUNN
Art By: JAVI FERNANDEZ
Cover By: DAVID YARDIN
On Sale in May!

Finally, the end of the Marvel Universe extends into Asgard and beyond as all the Ten Realms face their final hours in LOKI: AGENT OF ASGARD #14. Al Ewing and Lee Garbett bring you the curtain call of the God of Mischief. Ancient enemies march on Asgardia seeking their final vengeance – including King Loki, meaner, madder and more dangerous than before. Where is our Loki? What tragedy has befallen him, here at the end?

LOKI: AGENT OF ASGARD #14
Written By: AL EWING
Art & Cover By: LEE GARBETT
On Sale in May!

Before Secret Wars can begin, the Marvel Universe must end. And it all starts this May as the entire planet faces their LAST DAYS! 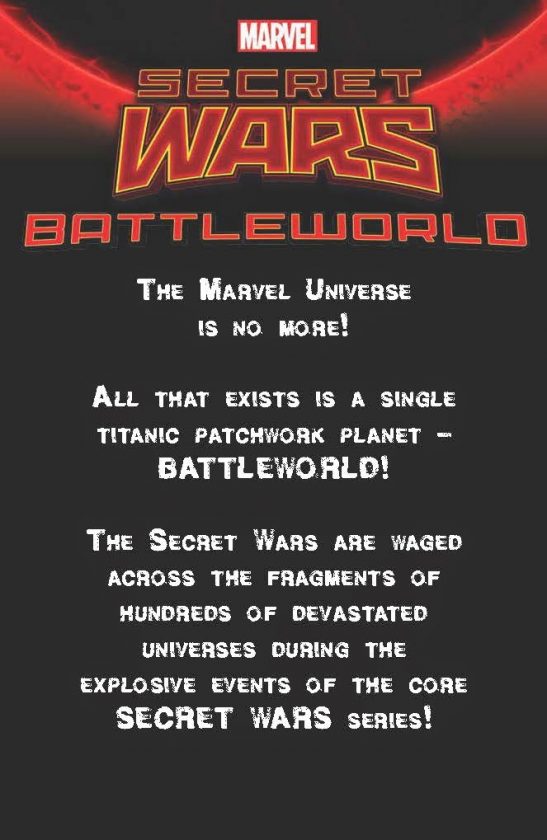 Welcome to BATTLEWORLD, which joins LAST DAYS as two of the three unique umbrella brands of titles launching during Secret Wars!

“If you want the full story of what’s happening across the surface of this new planet,  BATTLEWORLD branded titles are for you. Who polices Battleworld? How do the various domains interact? What happens when those domains go to war?  What strange, never-before-seen creatures inhabit this world? What familiar faces will make appearances? Fans who want to fully understand how each sector interacts with the others can’t miss out on these books!”

Titles carrying the BATTLEWORLD banner will focus on the interworking and interaction of all the domains now fused together throughout the one and only remaining planet! The Secret Wars are waged as the last remaining fragments of dead universes fight for survival. Who rules these domains? Who comes out on top? Who lives? Who dies?

“The inner machinations of Secret Wars happen here. BATTLEWORLD branded titles will be clearly marked through the Marvel Previews solicits as well as with well distinguished cover trade dress, this way both retailers and fans will know what they’re getting. Think of these as the new core monthly titles. “

The wheels are spinning, and the Ultimate Universe is on a collision course with Secret Wars. The gut-wrenching end begins this May as Brian Michael Bendis & Mark Bagley reteam for ULTIMATE END #1!

The drums of war beat for the Inhuman nation. But when the dust clears, who will rise? Find out as BATTLEWORLD comes to the Inhumans in INHUMANS: ATTILAN RISING #1 this May!

This May, can one beaten-down man become a MASTER? As Secret Wars begins, step in to the arena and prepare to find out in MASTER OF KUNG-FU #1!

What secrets are about to be revealed? Find out this may as Secret Wars enters BATTLEWORLD! 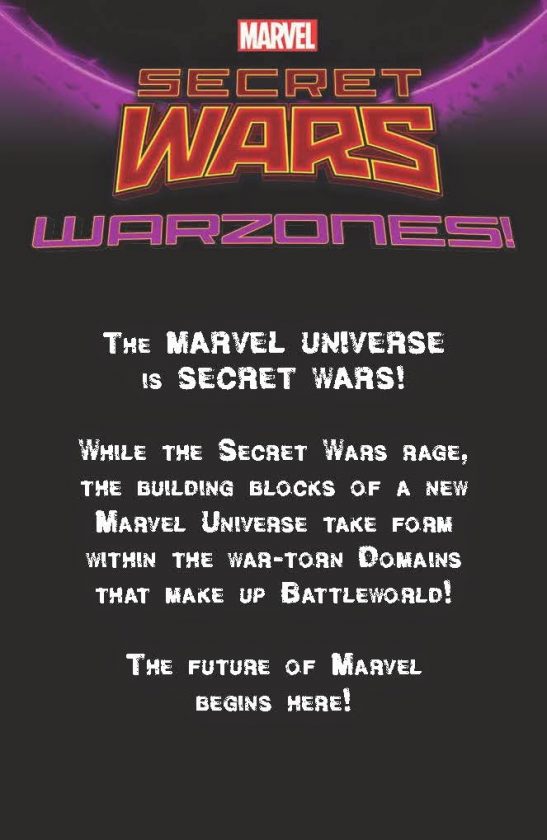 “If you want a glimpse of what the future holds, you’ll find it in the WARZONES titles. Our creators let their imaginations run wild as they lay down the foundations for the future.  Whether we’re revisiting the most popular events from Marvel’s past or telling completely new stories, you won’t believe what we’ve got in store for you.”

All that remains in the cosmos is Battleworld, the strange, patchwork realm playing host to countless realities, all existing side-by-side, fused into a single planet! Titles carrying the WARZONES! banner tell stories of the individual dominions of Battleworld. What happens within their borders? What heroes guard their skies? What villains conspire within? How does over 75 years of Marvel’s epic history play out now that Battleworld is all there is?

“To be clear, WARZONES! titles are NOT fill-ins. These are the event caliber books, magnified to the Nth degree. Secret Wars has afforded us a completely unique opportunity to tell huge, epic, event-sized stories within the framework of this new, patchwork planet – events within events. These titles will lay the building blocks and groundwork for what’s next, if that gives any indication of how important they are!”

This May, jump back to the year 2099 as Marvel’s Secret Wars incorporates the cyber punk dystopia in SECRET WARS 2099!

SECRET WARS 2099 #1
Written By: PETER DAVID
Art By: WILL SLINEY
Cover By: DAVE RAPOZA
Coming in May! 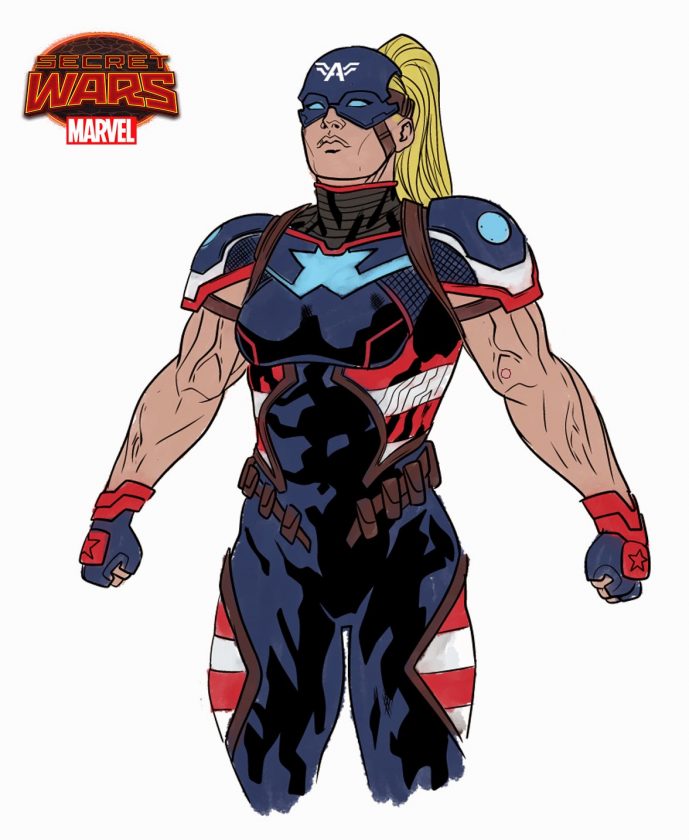 And there came a day, a day unlike any other, when Earth’s Mightiest Heroines found themselves united against a common threat. On that day, A-Force was born—to fight the foes no single Super Hero could withstand! Their glory will never been denied! Heed the call, A-Force Assemble!

Now, Killville’s most notorious mercenary is open for business, but this next job may put him in over his head! M.O.D.O.K. is going toe-to-toe with Doc Ock, Bullseye and even Baron Mordo and that’s just the first issue, True Believer! Bullets will fly and heads will roll this May in M.O.D.O.K. ASSASSIN #1!

MODOK ASSASIN #1 (of 5)
Written By: CHRISTOPHER YOST
Art By: AMILCAR PINNA
Cover By: DAVID LAFUENTE
On Sale in May!

Amidst the flames lie demons, ghouls and the Goblin Queen herself. Colossus and his team of Nightcrawler, Boom Boom and Domino will face them all in an effort to save Illyana. But can she be saved? Or has she already been lost? The answers lie in the flames True Believer as INFERNO #1 burns bright during Secret Wars this May!

INFERNO #1
Written By: DENNIS HOPELESS
Art & Cover By: JAVIER GARRON
Variant Cover By: ADI GRANOV
On Sale in May!

While the Secret Wars rage on, the foundation of a new Marvel Universe take shape within the war-torn domains across Battleworld. The future of Marvel begins in the WARZONES!

Retailers: Upcoming issues of the Marvel Previews catalog will have clearly marked branding on all Secret Wars pages.

Let us know in the comments what you think of this First Look at Marvel during SECRET WARS and don’t forget to follow us on Twitter for the latest Previews, Reviews, News and Interviews!