In “Kickstart the Week” I will be showcasing projects on Kickstarter that you can help make a reality! I will also be interviewing the creative team of the project. First up is a science-fiction comic called Time Stop.

Ben Thomas can’t catch a break. He has little money left, may lose his job and is slipping into madness. However, his life turns around when he receives a package containing a wristwatch capable of stopping time.

The Kickstarter is for Time Stop #1. Ben’s adventures will not end with this issue though. Issues 2-5 have already been written and there are even more issues currently in the outline stage. The story is by Tom Spellman with artwork from Rafael Chrestani and Jordi Estevez plus colors by Fahriza Kamaputra and letters by John Rudwall. 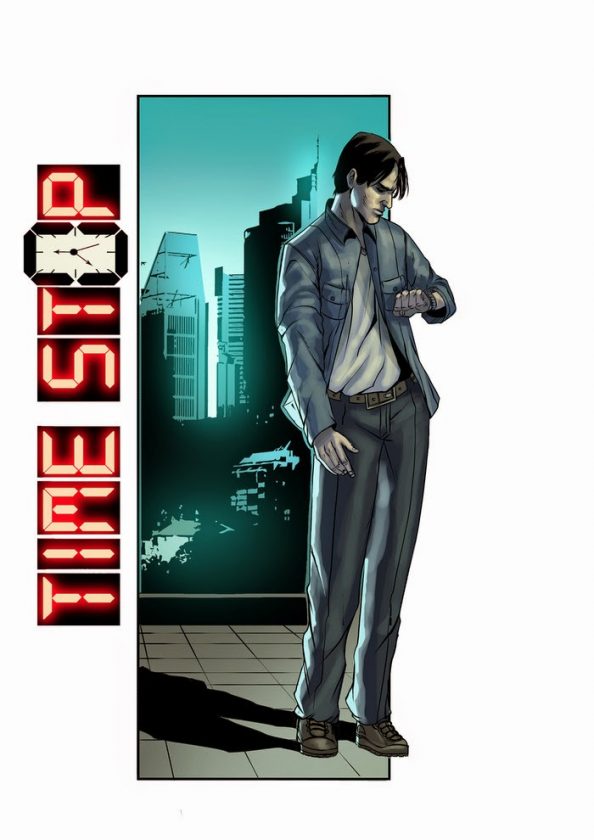 The creative team offers different rewards depending on how much you pledge to their project. You can pledge a minimum of $1 but will not begin to receive awards unless you pledge $5 or more. For $5 you will receive a PDF copy for the first issue of Time Stop. At $10 you will get a PDF copy and your named listed in the first issue as a patron of the arts.

UPDATE (3/9/2015): Unfortunately the first attempt to kickstarter Time Stop #1 was unsuccessful. However the Time Stop Kickstarter has been re-launched. You can now pledge money for the first issue here. The team is now shooting for at least $1,500 and you now have until April 8th, 2015 by 8:00 pm EDT.

I spoke with the writer of Time Stop, Tom Spellman, about his project to get more details:

Me: How would you describe the story of Time Stop?

Tom Spellman: I’ve had the idea for Time Stop for quite a few years. The idea of Time Manipulation is not a new concept and I want to make sure people understand I am not taking credit for something that has already been popularized. Most people I mention the idea to compare it to the guy on Heroes that could stop time, I think his name was Hero.

The idea was portrayed a few times on the Twilight Zone which is where I first saw it. But the idea of Stopping Time has not been broken down and examined and portrayed in current times. Some of the most fun I have writing issues is deciding how objects maneuver when time stops. For example, if you are on an NYC subway, you and the subway are moving at the same speed. If you stop time, the subway stops but does your body keep moving? Cool things like that.

The story itself revolves around Ben Thomas, a mid-20-year-old guy trying to make it in New York City. He has a not so nice boss, he has a hard time making rent, not much family, and not much time to do the things in life that fulfills people.

If things go my way, there will be many Time Stop issues. I’m not sure how many but I know how the story ends and I made sure to hide clues in issue 1 that will come into play farther down the story. I love comics that, besides having a great plot, are both funny and emotional. One of my favorite comics is Daytripper by Fabio Moon and Gabriel Ba. It’s the first comic that made me cry while reading it. My story won’t be as sad but I want emotion to play a big role.

Me: What was your inspiration for Time Stop? 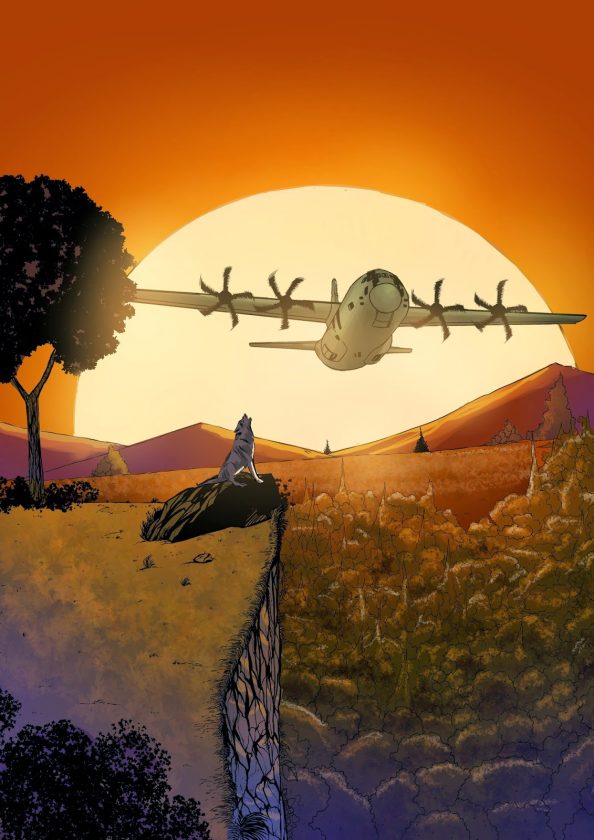 Spellman: When I think back about high school, the classes that stand out are science related. Biology, chemistry and physics were amazing. And though I took numerous classes in my four years of college, the only class that really stands out was Space Exploration. When you combine space and science, you get concepts like black holes, Gravity and time. All that cool Stephen Hawking, Albert Einstein stuff.

One of the coolest things I can remember from science class was the Hafele-Keating Experiment. This is the experiment where a pilot and a scientist tested Einstein’s Theory of Relativity. They had identical thermal clocks that read identical times. One stayed on the ground and one went into a plane that flew around the world. When the plane returned, one clock actually read a different time by Nanoseconds. Einstein predicted this and it was proved. So where those people actually different? This is mind boggling to me. I heard this is addressed in the new Christopher Nolan Movie but I have not seen it yet.

I have been a comic book fan since I was about 10 years old. At that time, it was TMNT and Uncanny X-Men. As I grew older, I stayed loyal to Marvel, following Astonishing X-Men, Ultimate X-Men and Ultimate Spider-Man. Little did I know I was reading material by a somewhat unknown Robert Kirkmann at the time. Now I’m a big Image and Vertigo fan. If I had to describe Time Stop’s main character Ben, it is as if Peter Parker and Yorrick from Y the Last Man had a baby together. Sorry, I know it sounds weird, but it makes the most sense.

Me: How did you and the rest of the creative team find each other?

Spellman: When I decided to move forward with Time Stop, I spent a lot of time on forums that give aspiring comic book writers and artists the opportunity to meet.  This is where I handpicked my team.  My goal was to find an artist who had drawings in their portfolio that resembled my vision of the story.  This gave us a good starting point for design.  For Time Stop’s artist, I chose the extremely talented and fun to work with Rafael Chrestani from Brazil.

Somewhere along the way, I had a cool idea of having a separate artist draw the 4 page dream sequence featured in issue #1.  Jordi Estevez from Spain, another extremely talented artist, was perfect for the sequence.  As the artwork started coming in, I then chose Fahriza Kamaputra from Indonesia, for the coloring.  I am also using John Rudwall, a friend of mine here in the states, to do the lettering and help complete the project.

Me: What other comic related projects have you worked on?

Spellman: This is my first endeavor.

Me: What advice would you give to aspiring comic book writers?

Spellman: Go For It!  If you have been thinking about developing a comic book, make the decision to do it.  There are tools online that help you write a script.  Read the “Submissions” section of a few publishers’ websites, there’s a lot of good information there.  Spend time on forums chatting with artists and check out their portfolios.  For every aspiring writer, there’s an aspiring artist just waiting to work with you.  Chat, bounce ideas of each other, have fun with it.  Costs eventually come into play but there’s awesome sites like Kickstarter that help you fund your project. Whatever barriers are holding you back from publishing your first comic, break through and just do it.

Me: I also spoke with the artist of Time Stop, Rafael Chrestani.

Me: How would you describe the art style of Time Stop?

Rafael Chrestani: The art of Time Stop can best be described as realism, which is how I describe my own art style. This is what Tom was looking for to bring Time Stop to life. As opposed to art that looks like a cartoon, I like to draw as close to real life as possible. I have been drawing for many years and who knows, my style may transform over time.

Me: Why did you and Tom ask for the artwork be more realistic rather than cartoonish?

Chrestani: It is more appropriate to the script. Tom liked my realistic drawing style and felt it would fit the story perfectly. A cartoon style would not be enough for the seriousness of the plot.

Me: What was your favorite panel, page or character to draw in Time Stop?

Chrestani: I have greatly enjoyed being part of the team as an artist for Time Stop. Tom is very competent and a perfectionist in providing exact details of page and panel descriptions. And I am a perfectionist with my art so we make a good team. My favorite character to draw is the main character, Ben. Who wouldn’t want to draw someone that can stop time? Haha. I loved drawing a page with Ben that involves a bullet but I won’t give it away.

Me: What other comic book projects have you worked on?

Chrestani: In 2010, I was 20 years old and decided to put my goal of becoming teacher on hold and pursue my true dream of being a comic book artist. From there I had the opportunity to work on short stories and other small projects. Living in Brazil has made it difficult to find comic art opportunities in the States which is unfortunate since there are so many extremely talented artists overseas that would love the opportunity to be part of a project.

Things are starting to move forward as I am currently working on eight separate projects which include inking a biography of the Dalai Lama with my friend Cristian S Aluas and drawing a web series adaptation of the “Golden Age of Film Urreola.” And of course, I continue to work with my fellow Tom. Issue 1 of Time Stop is still in production but I have already begun art for issue two. The story is amazing and I am excited to help bring Tom’s idea to life.

Me: What advice would you give to aspiring comic book artists?

Chrestani: My father and mother wanted me to have a traditional job (engineer, doctor, teacher), but my dream has always been to be an artist of comics. There were some tough moments with my parents who did not support my decision at first. But over time, with the help of my brothers who were supportive from day one, my parents begin to admire my skill and determination.

So when it seems like everyone is against you, and nothing seems to go right, do not give up. Study, change your style, learn.  Never give up. I spent four years preparing, earning less than $200 per month, but never gave up. Now, my hard work is starting to pay off. My art is paying the bills. Plus it’s great to have money to invest in things that help you draw better like books, brushes, paper, printer, something that helps you at work. Then, when your work is complete, there is criticism that is sometimes there. That can be tough but it’s important to realize they are only people’s opinions and never be taken to heart. Most importantly, always think your best work will be on the next page, because an artist must always learn and improve their abilities. In this aspect, I still consider myself a beginner before the great names in the world comics.

Me: Thank you both for your time and best of luck getting your Kickstarter funded!

If you have a Kickstarter and you are interested in being interviewed about it, let me know in the comments below!