Written By: Kat “Comic Uno”
I have never been a big anime fan, but recently I have found a couple of series that have caught my eye. Showing that anyone can find a show within this medium. As everyone knows I love comic books and television, when you can mix both I am in heaven. Railgun is the superhero anime you probably never heard of before.
Railgun is the spin off series of A Ceratin Magical Index, but you do not need to see the parent series to understand Railgun. The first season of Railgun is actually a prequel to A Certain Magical Index. You do not see Toma and Misaka even interact until Railgun S. 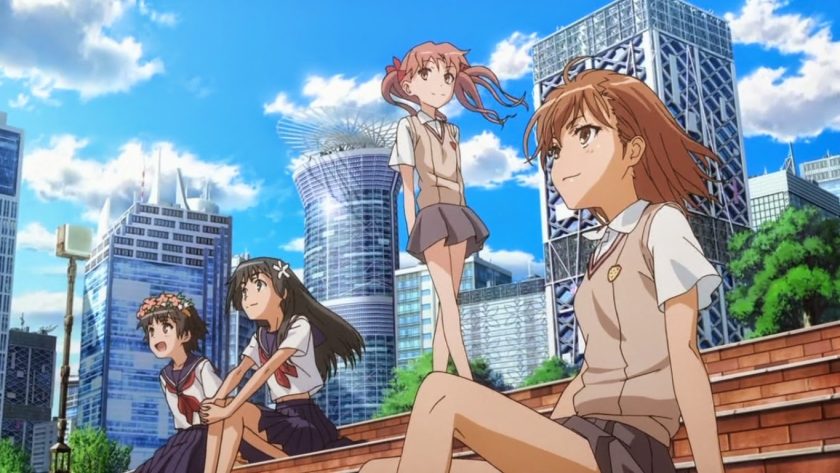 A Certain Scientific Railgun takes place in Academy City, a sort of utopian city which bases itself in scientific study and order. Here in this city live super powered beings called Espers. Espers are measured by their level. Level 0’s have no powers at all and Level 5 Espers are the most powerful in the city. There are only seven Level 5 Espers. Our main character Mikoto Misaka is the third ranked Level 5 Esper. Everyone knows her as Railgun. She goes to a prestige school called Tokiwadai Middle School. Tokiwadai is an all girl school for students who are Level 3 Espers and up.
Three of the main supporting characters are Kuroko Shirai, Ruiko Saten, and Kazari Uiharu. Shirai is a level 4 Esper who is also a member of Judgement (the police force of Academy City). She is in love with Misaka and this makes her the comedic relief of the show. Uiharu is a level one Esper who is a great hacker and she is also a member of Judgement. Saten is a level 0 Esper and this means she has no powers. Even though these girls all walk different paths of life they all come together and become best friends. They work together to save Academy City, but they also just like spending time together. 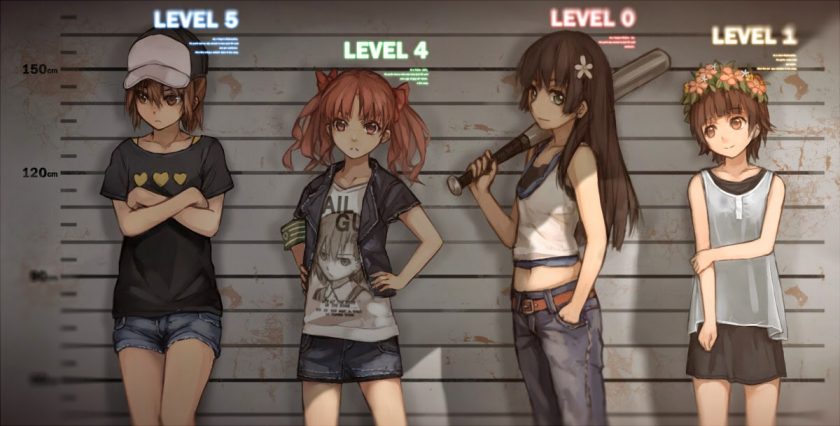 Season 1 of Railgun is mostly a character building season. It has a lot more one shot episodes compared to Railgun S. The plot moves a bit slower, but this is not a bad thing. Because of these character building episodes we care more about our main characters and our secondary characters. After watching season 1 of Railgun I found myself not just caring about Railgun as a character, but Academy City as a whole. This season was a great world builder.
There are so many characters that could have been one dimensional, but get a chance to shine in their own episodes in Season 1. Saten gets the most important development this season. The first main story arc actually surrounds mostly around Saten, the level 0 Esper. An illegal device is being spread around Academy City called the Level Upper. Saten is so desperate to become a Level 1 she obtains this device and doesn’t think about the consequences. This set of episodes makes the audience understand what it means to be powerless in a city that only functions because of Espers. This arc shows that you don’t need to be an Esper to be a powerful character in Railgun. Saten has a lot of spunk and in the season 1 finale it is actually the Level 0 that saves the day.

Other minor characters that also get spotlight episodes in season one are Kongo,The head resident, Mii and even the members of Anti Skill. These are characters that should only be part of the background, but they become three dimensional characters you start to care for.
Kongo is your typical mean girl in the first episode of Railgun. She and Shirai always have an attitude towards each other, but as the season continues you learn that Kongo just wants to be friends with everyone. She may seem stuckup, but she tries helping in her own way. The Head Resident is that one teacher in school that always gave you detention even if you were just a minute late to class. She likes having power, but in episode 18 we learn that the head resident is just a normal person with a heart of gold outside of the resident halls.  Mii became one of my favorite characters because of episode 16. Mii is a officer of Judgement, but she actually use to be part of a gang. You see how much the character has developed and it’s awesome that we get to see her in her red leather jacket when she is ready to kick butt. Lastly the members of Anti Skill are always there when Academy City needs help, but really they just like having fun like the rest of us. It’s hilarious how the head of Anti-Skill gets drunk almost every night after her shift.
As you can see Railgun Season 1 is filled with great character moments even from the minor characters, but how about our main characters. One of my favorite things about season 1 of Railgun is how much the friendship among the four girls shines. Misaka is one of the strongest people in Academy City, but she still likes to hangout with her friends even if two of her friends don’t really have powers at all. She doesn’t look at her friends level of power, but she sees different qualities in these girls. Misaka is not a person to judge even with her high status in the city.

Shirai is also a character that grew a lot throughout the first season of Railgun. It’s hilarious how much she loves Misaka. The first season plays her as a comedic relief, but she also has a lot of strong character moments throughout the season. Shirai is a loyal friend and will do anything for Misaka. And the big battles in the show always look really cool with Misaka and Shirai’s combined powers of electricity and teleportation.
Season 1 is filled with many character moments and comedy. This season was very much needed for the deep emotion that comes in Railgun S.

Railgun S is really heavy. The season follows Misaka as she finds out that scientists from her past stole her DNA map to create over 10,000 clones. These clones are being used to help the first ranked Level 5, Accelerator, become a Level 6. If he kills all of these clones he will be able to gain that power.
Misaka learns about these experiments and start to go down a dark path. She discovers the shadows of Academy City. Misaka goes into a solitary place and pushes her friends away. This especially worries Shirai who sees a jaded Misaka not returning home at night. The only person Misaka allows to help her is Toma. By the end of the arc she is able to give her sisters a normal life.

I really have to applaud the Sister Arc because this is some of the best emotional scenes I have seen on television…period. Not just an anime, television. With this arc the audience truly goes into Misaka’s head. You feel her guilt and the lonely path she has choosen for herself. Her friends try to help, but a pale face Misaka rejects their helping hand.
I love the repetitive flashbacks throughout this arc of the season. Misaka keeps seeing her sister’s pain. Broken limbs and blood. She will never forgive herself for a bad decision she made as a child. She thought she was using her blood to help a young child with a disease, but instead these scientists used her blood to do something inhumane. 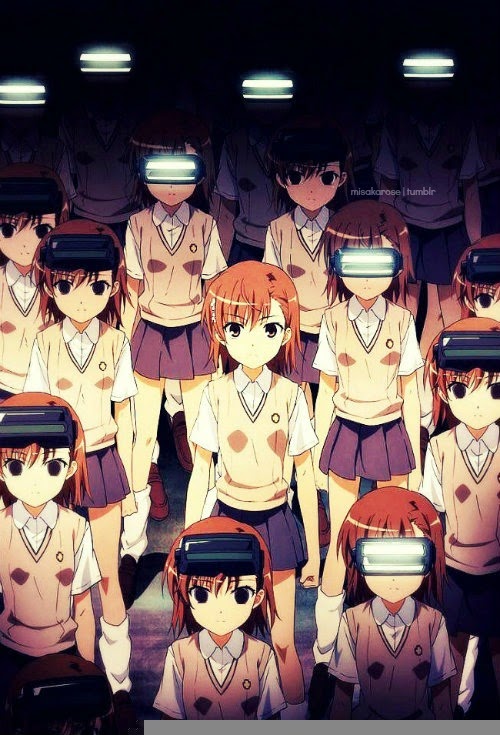 This season really mixes morality with science. Is it right to clone someone? What would you do if you came face to face with a person that looked exactly like you? If you are clone are you even human? These are questions that Misaka has to quickly figure out. The whole arc is Misaka dealing with having clones and being a bigger sister. But she never questions if her clones are human. She knows they deserve to live. She even thinks about sacrificing her life for her sisters’ lives.
The sisters arc could have easily ended Railgun S, but the anime has a second arc also dealing with genetic engineering. A little girl who is genetically engineered becomes part of a plan for underground scientists to destroy Academy City. This arc has a similar weight to the sisters arc, but Misaka learns from her mistakes. She learns that she can’t do this on her own. This time she gains the help of her friends to save this little girl and Academy City. 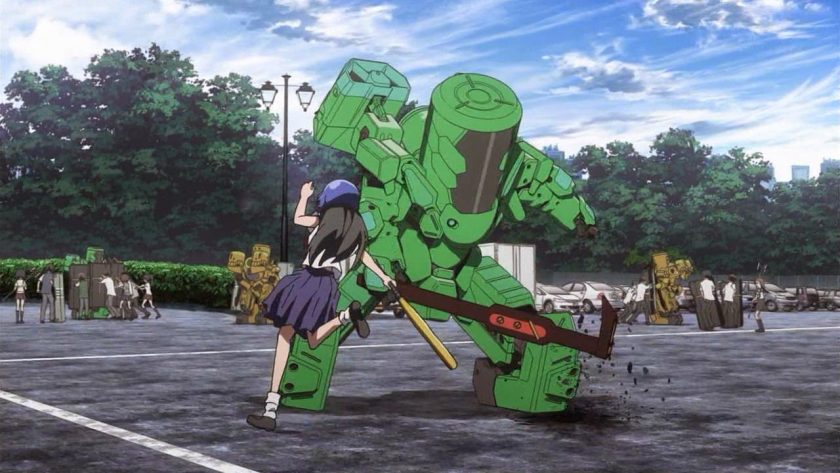 I thought this was a perfect ending to Railgun S because it shows how much Misaka has matured. She has seen the dark side of Academy City and has changed as a person, but she still needs her friends beside her. Everyone gets a shining moment in the final battle. I guess my only disappointment with this season was that Misaka’s friends never learn about her sisters. I hope if they ever do a season 3 they end up finding out about those emotional moments. I also could have done without the music throughout the whole final battle.
If you like character stories I recommend you watch Railgun! The show is an emotional roller coaster with comedy, action, and drama.
Railgun Series: 5 out of 5 stars