It’s Monday, meaning it’s time for another “Kickstart the Week.” I will be showcasing the Kickstarter for the first three issues of the ongoing series CHUNKS.

The series focuses on a band called The Pineapple Chunks. CHUNKS is styled after a sitcom. The group gets into many comedic misadventures. This comic book also contains adult humor. The first eleven pages of CHUNKS #1 are available for free using this link.

You can help CHUNKS get funded on Kickstarter. The project needs £3,000 and must be fully funded by April 2, 2015 at 7:10 AM Eastern Standard Time (EDT). The Kickstarter will use £2,000 to pay the artist, Chris Canfailla to do the illustrations for CHUNKS #3. The other £1,000 goes towards publishing the first two issues of the series.

If you pledge at least £6 you will get digital copies of CHUNKS #1 and #2. Printed copies are given to those pledging £11 by May 2015 in addition to the digital copies if you live in Australia, Canada, Mexico, the United States, and the European Union. Learn more about the reward you can get on their Kickstarter page.

I spoke with the writer of CHUNKS, Matt Garvey, in detail about his project.

Me: What inspired you to write CHUNKS?

Matt Garvey: Two things I think we do really well over hear in the UK is Comedy and Punk Rock. I grew up watching chaotic sitcoms like “The Young Ones”, “Bottom”, “Blackadder” and listening to bands like “The Clash” and “The Sex Pistols.” If you add that to my affection for Kevin Smith movies, you can pretty much see how this comic came to be.

I just want to make people laugh…and cringe a little.

Me: Why did you decide to have the first eleven pages of your comic for free on your Kickstarter?

Garvey: I’ve backed a few projects on Kickstarter and there are some great projects on there. However, I never really see anyone giving away more than a page or two for a reader to sample. You see a lot of character sketches, fancy videos but no “here, read half the comic, see if you like it. If you do, pledge. If you don’t, thanks for stopping by anyway.” I didn’t want people to waste their money backing CHUNKS if it isn’t there cup of tea and if I cannot make you laugh in those eleven pages, the comic is not for you.

Me: How would you describe the humor of Chunks and the audience it’s targeted for?

That’s the only way I can describe it. You get the first two issues in this Kickstarter and there is method to my madness doing this. The first issue is funny, it’ll make you laugh and is a nice introduction to the characters and what to expect going forward.

HOWEVER, the second issue is where it takes wrong to another level. It is going to cross a few lines and may even upset a few people in the process, but it’s hilarious. When I write a joke in any form whether it be for a comic, tweet, text or email, I’ll always have a silly smirk on my face as I type it. But, when I wrote CHUNKS #2, I actually laughed out loud. It is the funniest thing I have ever written (so far) and I am immensely proud of it. If I only ever get to make one comic, I’m glad it’s this, because it is me on a page.

Plus, the art is Beautiful, I love it so much.

Me: Can you talk about the rest of the creative team on the comic? Who are they and how did you all get together to create CHUNKS?

Garvey: My artist is an Italian chap by the name of Cris Canfailla.

I have never met him and we have never spoken outside of an email, but I love this guy. He is a good egg and he gets my humour, which is great because comedy is something that doesn’t usually translate well into other languages.

I found him in the creative section of a comic forum. I had a cunning plan to stand out from the hundreds of other writers on there who ask artists to read their scripts and work on their comics.

Here is the secret, ready?

I paid. It is that simple. I wanted to get this comic made so bad, so I saved like crazy. Then I advertised that I was looking for an artist, I am paying and I have a budget. I was inundated with responses, but I was looking for a specific style and Cris’ was the perfect fit. We agreed on terms and I paid him to produce the first two comics.

He is the reason I wanted to do the Kickstarter, he did this project on a shoe string budget because he liked the story and I want to help get him a nice payday to do #3 with the hopes that sales from all three issues after will help us keep making the book.

Cris has done me proud on CHUNKS so far and this is my way of thanking him.

Me: How would you describe Chris’ art style and why did you feel it was the right fit for CHUNKS out of all the other artists who contacted you?

Garvey: Cartoony and that’s what I wanted. When I saw Cris’ art, I knew right away that he was my guy. His style is exactly how I saw the book in my head. My theory was, because CHUNKS is a very silly book, I thought giving it a cartoony feel would make it a little less offensive…because it’s cuter.

Me: What other comic book projects or writing work have you done? 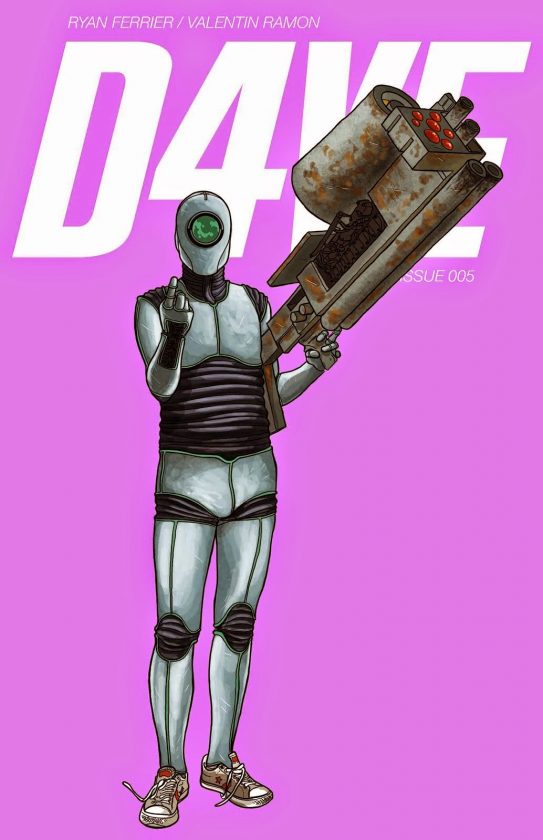 Garvey: I’ve had a few short comic strips printed in a couple of anthologies. One was called INFRACTION that I did with a chap called Valentine Ramon, who has just finished up a great series called D4VE over at IDW. (CHECK IT OUT) INFRACTION was something that we submitted to 2000AD, but was rejected.

A couple of friends over on the MillarWorld asked if they could use it in their SPOD: Oddities from space anthology.

I’m also working on steampunk murder mystery series called THE ADVENTURES OF CORDELA SWIFT. I have just found my artist and he is amazing, so hopefully when we get two issues done I’ll kickstart it to help get the rest of the book complete.

Me: What advice do you have for aspiring comic book writers?

Garvey: First and foremost, pay your artist if you want him or her to draw your comic.

It doesn’t have to be a huge amount. Even if it’s only $10 a page, you will be amazed at the quality of work you will get back and it will make him or her feel like you really value their art. It shows them how serious you are about your project too. Plus, when you think about it, a writer can turn out a decent polished script in a week.

If your comic is 24 pages long, it is going to an artist at least a month (AT LEAST) to get your comic done and that’s assuming that they don’t have a full time job, school or a family. Would you work for an entire month for free?

So, pay your artist.

Write for fun. I don’t write for fortune and glory or to be the next Alan Moore, I write because I enjoy it and I want to tell stories. Do not get me wrong, if I was approached by one of the big two or IMAGE picked up one of my stories, I’d be ecstatic. But, I do not have delusions of grandeur about my writing, because very few people are able to make a living writing comics.

Have the dream, but be realistic.

Also, don’t take rejection personally. Comics maybe a creative medium, but remember it is a business too. Companies are there to make money, so if an editor says no thanks, remember its business, it’s not personal.

Me: Thank you for your time Matt! Best of luck with making CHUNKS a reality.

Have a Kickstarter? Want to be interviewed about it and have it showcased on “Kickstart the Week?” Let me know in the comments below or message me on www.comicmaven.com.