IDW Publishing will be releasing a comic book adaptation of Richard Matheson’s science-fiction novel The Shrinking Man. The four-issue mini-series will be written by IDW’s CEO/Publisher Ted Adams and the artwork will be handled by Mark Torres.

The winner of the 1958 Hugo award for best science fiction/fantasy dramatic presentation, The Shrinking Man is about family man Scott Carey. Carey, after coming into contact with a strange cloud, slowly begins to shrink every day.

Adams talked about his schedule and his anticipation of writing the series. He mentioned how “Running IDW keeps me busy so I don’t have as much time to write as I’d like but when we decided to adapt Matheson’s classic novel, I knew I had to find the time… This isn’t just a great adventure story, it’s also an exploration into what it means to be a man when you can no longer provide for or protect your family.” 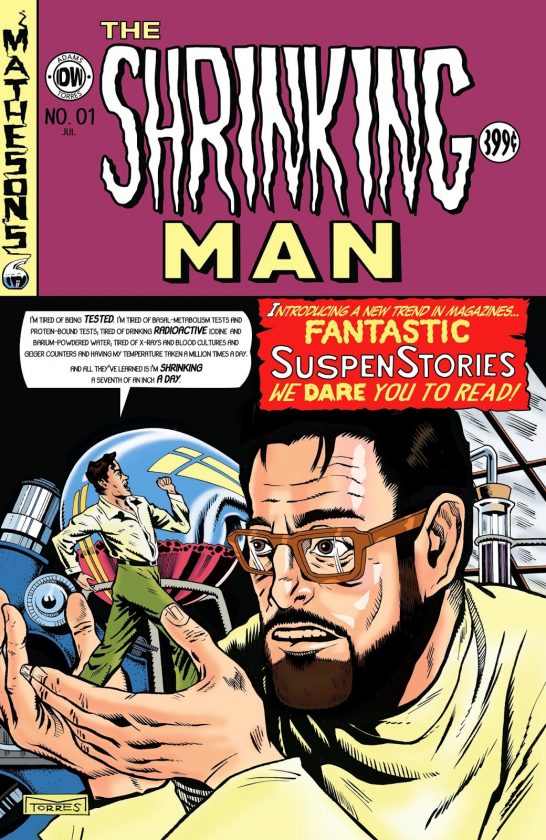 The Shrinking Man will be part of IDW’s “EC Comics cover month” so it will feature a variant cover that is a homage to EC Comics covers from the 1950s. The Shrinking Man #1 is stylized after Al Feldstein’s Weird Science #12 (June 1950). The variant will be drawn by the illustrator of the mini-series, Mark Torres.

The series is also part of IDW Publishing’s Five Feature Firsts, an initiative of the company to release a new series every week of July 2015 on Wednesdays. It is not the first adaptation of Richard Matheson’s work that IDW has done. IDW has also adapted Richard Matheson’s I Am Legend and Hell House as well as some of Metheson’s short stories including “Blood Son” and Duel.

I have read many of Richard Matheson’s original stories and he is one of my favorite writers. He wrote over 25 novels, almost 100 short stories and scribed numerous teleplays. He was responsible for many Twilight Zone episodes including the classic episode “Nightmare at 20,000 Feet.” I enjoy how his works often blend horror and science-fiction. Sadly, he passed away in July 2013 at the age of 87. He will be greatly missed.

Let us know in the comments what you think of this IDW Publishing announcement and don’t forget to follow us on Twitter for the latest Previews, Reviews, News and Interviews!
All images images are courtesy of IDW Publishing