This week’s Kickstarter features a comic book taking place in Africa 2025 with a hero out for redemption. E.X.O. – The Legend of Wale Williams promises to bring more diversity into comics.

E.X.O. – The Legend of Wale Williams Part One is the first of a two part graphic novel. It is 130 pages of full color. The graphic narrative stars Wale Williams, a young man returning to Africa in the year 2025 after being gone for five years. He is investigating the disappearance of his father and his only clue is a Nanosuit which has remarkable superpowers. Wale wears the suit to protect the city and must stop the sociopathic extremist known as Oniku.

The writer and creator of the series is Roye Okupe and the editor is Ayodele Elegba. The illustrator is Sunkanmi Akinboye and the colorist is Raphael Kazeem.

The Kickstarter project has already exceeded its goal of $3,500 (in three days no less!), however Okupe has created several stretch goals. If the project reaches $8,000, everyone who pledges at least Hero Level 5 ($50) will be getting a digital and physical print of an EXO character poster and Okupe will donate 20 books to a local library for kids and youths. At $10,000 every backer will receive a Kickstarter exclusive variant cover. Then, if the project reaches $12,000, book two of E.X.O. will begin production and everyone Hero Level 1 ($10) and up will get a PDF preview version of the first ten pages of E.X.O. – The Legends of Wale Williams Part Two.

The rest of the stretch goals are a secret but Okupe hints at animation, limited edition apparel and more goodies related to part two of the book. You can pledge money on their Kickstarter page. Money will be accepted until the Kickstarter ends on May 5th, 2015 at 10:02 am EDT.

I spoke with writer Roye Okupe in detail about E.X.O. – The Legend of Wale Williams Part One.

Me: What makes someone a hero?

Okupe: Sacrifice. If you do your research in fiction and in real life, one thing that is consistent amongst heroes is their willingness to sacrifice for the benefits of others.

Me: How would you describe our hero Wale Williams?

Roye Okupe: I tried to make Wale as relatable as possible. I didn’t want to make him too different from you and me. We all have things we struggle with, pains from our past and worries for our future. Wale is a very troubled soul at the beginning of the book. Throughout his journey he learns a lot of painful life lessons as we all do as we grow. Without giving too much away, the best way to explain his journey is that it is a story of redemption.

Me: Can you tell me about the Prime-X (the term his father uses) suit Wale wears and how the design and capabilities of the suit were decided?

Okupe: Hmmm, how do I talk about this without giving the plot away, lol. Well, I’ll say this, the Prime-X is an integral part of the story. It’s kind of what ties all the important characters together. In essence, the Prime-X is the power source that allows the E.X.O. suit to function. So they are two different things (the Prime-X & the E.X.O. suit). Wale is “connected” to both in a very unique fashion. In terms of the design and capabilities, my vision was to have a suit that packed a serious punch but was also lightweight. In the book, Wale’s father finds a rare metallic like material that he uses to achieve this purpose. So while the suit can deflect powerful projectiles, it only adds a weight of about 40 pounds when Wale puts it on. In terms of capabilities, I’ll have to save those for hopefully when you read the book. 🙂

Me: Wale’s family appears to play an important role in not just Wale’s life but in the story as well. Can you talk a bit about them and their importance to the story?

Okupe: If there’s one thing almost anyone can relate to, it’s family. Whether you have good memories, bad memories or a combination of both. For me it was important to add that element to the story to make the characters more relatable. Wale’s father obviously plays a very important role (he builds the E.X.O. suit) but his mom and brother are also very critical. Majority of the life changing decisions Wale makes in the book affect his relationship with his family in one way or the other. I think that just raises the stakes and allows readers to be more invested in the story.

Me: Can you talk about some of the villains in the series that Wale will be facing?

Okupe: For me being that this is my first book, it was important to keep the focus on one villain, Oniku. Without giving too much away, Oniku is an extremely intelligent sociopath. He is currently the leader of an extremist group called the C.R.E.E.D. But as the series goes on Wale will face different villains with distinct personalities and motivations. Each one will challenge him and push him to his limits.

Me: You mention in your Kickstarter how you noticed a lack of diversity in superhero stories. Why do you think this is the case and do you find this problematic?

Okupe: There are a lot of independents producing a lot of diverse superhero stories, the issue is exposure. I think we just need more investors, popular websites, TV networks etc. to take a closer look at some of the stuff we put out. Put us out there and give the fans a chance to access our products. However we as producers of diverse content also have a responsibility to produce top quality stuff, and not just with the art work or animation, but with story structure and character development as well.

Me: You also mentioned that you noticed the lack of diversity in superhero comics in 2008. What made you have this realization and why do you think you didn’t notice before?

Okupe: I think it was much easier to notice back then when superhero blockbusters were getting popular. I think at that time three Spider-Man films, two Batman films and Iron Man had come out. So it was much more obvious.

Okupe: To be honest (and I know I’m going to sound extremely cheesy) a lot of superheroes inspire me. From the big names to the ones done by small independent guys. I think for me it’s just that there can be so much negativity and suffering in our world that sometimes you just want an escape where you can watch or read about the good guys saving the day and protecting people. But if I were to pick, I would say Eric Dean Seaton’s Legend of the Mantamaji series. Those books inspired me to step out and take a chance in creating my own story.

Me: What was it about TMNT that got you into superheroes?

Okupe: I’m not really sure. I think the fact that giant turtles were kicking bad guys butts just blew my mind away. It made me feel as if there was no limit to imagination when it came to superheroes. Also, the brothers all had different distinct personalities, I thought that was pretty cool!

Me: Why did you decide to set the story in Africa and in the year 2025?

Okupe: Two reasons. First I wanted to show people something they’d least expect. When add the words “Africa” and “Superhero” futuristic isn’t necessarily the first thing that comes to mind. That automatically generates interest. And I think it sets my book apart. The second thing is sometimes there’s a stereotypical view that people living outside Africa have towards Africa as a whole. Africa has a booming tech industry and I really wanted to highlight this in the book.

Me: If you could live in any place during any time period would you pick Africa in 2025 or somewhere else?

Okupe: Great question. My bias is naturally towards Nigeria where I was born. But the answer isn’t that straightforward. There are so many great cities and communities I would like to visit in my lifetime. Narrowing it down to one is impossible 🙂

Me: You started YouNeek Studios. Can you tell me a bit about why you started the publisher and what YouNeek is all about?

Okupe: To be honest it was out of necessity. For years I shopped my ideas to several people and organizations and no one was really interested at the time. But I was determined to get my stories out there so I decided to take matters into my own hands. So I started YouNeek Studios. My goal is to create a library of eclectic and intriguing characters. Simply put I was to tell extraordinary stories about extraordinary characters.

Me: How did it feel to reach you goal in three days and what do you contribute such amazing success on Kickstarter to?

Okupe: One of the best feelings in the world. To know that enough people believe in your product to donate and bring it to life. It’s the ultimate feeling! I know for a fact that the success is due to the aggressive way friends, family and other independent creators shared my story around the internet.

Me: Even though you’ve reached your goal, why should people still pledge to your Kickstarter project? 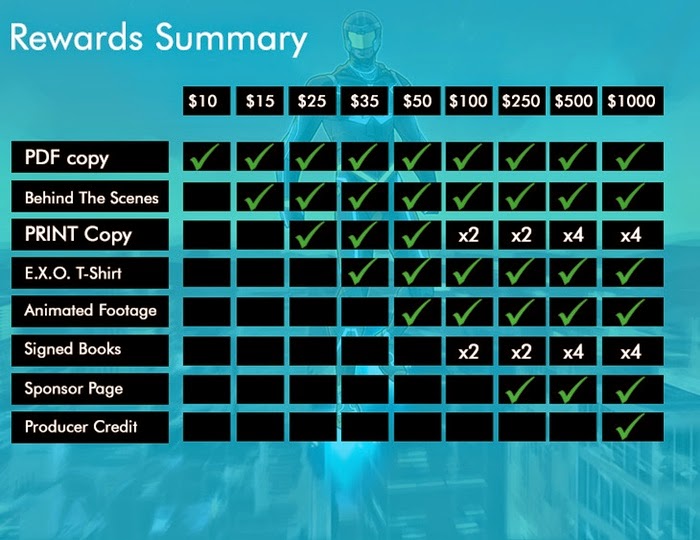 Okupe: I believe this project has the potential to make history. There aren’t many like it. And I want as many people to be as part of the movement as possible. By donating to this campaign you are not only helping to fund my dream, but you are creating momentum for every indie publisher out there. If I can do it, so can they. Also, by donating you are helping in the fight for diversity! Finally it doesn’t hurt that it’s actually a great book! If you are skeptical please read the free chapter. 🙂 Currently on the Kickstarter we have some great stretch goals we are trying to reach, one of which would allow us to give out free books to kids and youth via a local library.

Me: Who are some of your inspirations as a writer?

Okupe: My life is my number one inspiration. I’ve been fortunate to experience growing up in two different countries (Nigeria & USA). I’ve had so many ups and downs that have molded me into who I am today. And now I get to use that to tell different stories through different characters using those experiences.

Okupe: Work every day on perfecting your craft! A great story will always find its way to success.

Me: And I wish you even greater success in your endeavors Roye! Thank you for agreeing to an interview and best luck with E.X.O.

Do you have a Kickstarter? Want to be interviewed about it and have it showcased on “Kickstart the Week?” Let me know in the comments below or message me on www.comicmaven.com.