She’d just gotten off her internship and was enjoying a slice of pizza at her favorite restaurant with her mom when it happened. Katherine Calamia, to her friends Kat Cal and her fans Comic Uno, reached her goal on Kickstarter. A longtime reviewer on Youtube and almost lifelong comic book reader, 100 fans of Kat’s pledged a total of $6,010 to get her first comic book, Like Father, Like Daughter, published.

“It was really exciting and of course relieving that we hit our goal,” Kat stated.

Kat has been reading comics for most of her life and they are a big part of the future career she has planned for herself. Her father collected old DC comics and would read them to Kat and her brother when they were younger. She was addicted. Kat explained her love of comics: “I have always been a visual person. Growing up I hated reading books, but with comics I never noticed I was really reading. The visual aspect really drew me in. It’s great that comics can combine art and literature into one wonderful medium. Then of course I just love superhero stories. What I love about the genre is that you can tell stories anyone can relate to but they are heightened with the aspect of super powers.”

Kat didn’t stop at just enjoying the medium she loved. She decided she wanted to share her enjoyment (and sometimes her distaste) by talking about her love of comics with people online. She started reviewing comics in her sophomore year of high school. Kat and her friend were inspired by the frequent video reviews posted on a website called Comic Vine, the equivalent of Wikipedia for comics. The two became “Comic Duo.” However, when Kat’s co-host decided to move on from comics and the show, she continued on, reinventing herself as “Comic Uno.” She currently reviews comic books and does weekly topic videos featuring various matters about comics. When the TV show Young Justice, a show about teenage superheroes based on DC Comics, aired, Kat began doing reviews for the show and expanded to other shows including Revenge, Once Upon a Time and Daredevil. 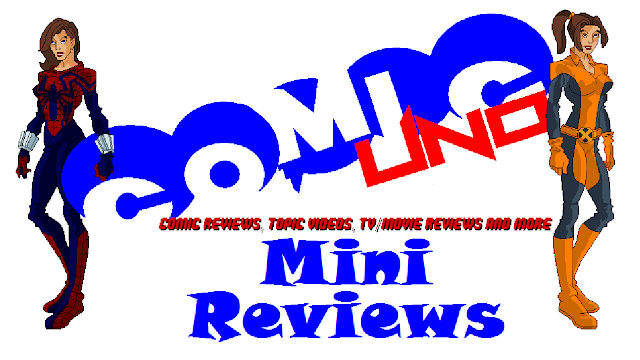 Kat also reviews comic books with a group of reviewers known as Comic Frontline (yes, you can find her articles on this very sidebar, probably under “POPULAR NEWS ON COMIC FRONTLINE”). She joined the group back in 2012 when they were known as Dark Avenger INC (the name was changed so the group would sound less focused on Marvel Comics). Kat was introduced to the group by a friend from her days on Comic Vine, Mike (known as Comic Corner 2.0 on Comic Frontline). She gushed about the success the site has had, commenting that “Now we have over 2,000 subs, a website, and 2 podcasts. It’s crazy to see how much we have grown.”

Combined with her work on her own Youtube Channel, Kat averages reviewing about twenty comic books a week. She went over her usual schedule in detail: “For weekly series I have on the channel are Comic Uno Episode, Mayday’s Journey, topic videos, and 101 videos. With Mayday’s Journey I have been reviewing every issue of Spider-Girl and it’s been a blast to go back to these issues since Spider-Girl is my favorite comic book character ever. With the topic videos I do the same thing I do on my channel. Then the 101 videos I recommend comics to read if you are new reader and you want to get into a character. With Comic Uno Episode I review all the comics I got for that week in one show.”

On top of all this, Kat participates on a couple of podcasts with her fellow comic book aficionados from Comic Frontline. She went into more detail about these podcasts, saying “On Tuesdays we have Frontline Live, where the whole Frontline crew talks comics and comic related news. This includes our Top 5 favorite books of the week and our worst pick of the week. On Thursdays Jay and I host Media Madness. My second love next to comics is television. This is a podcast where we get our friends from YouTube to talk about TV and movies with us. We always have a different topic each week and different guests each week.” 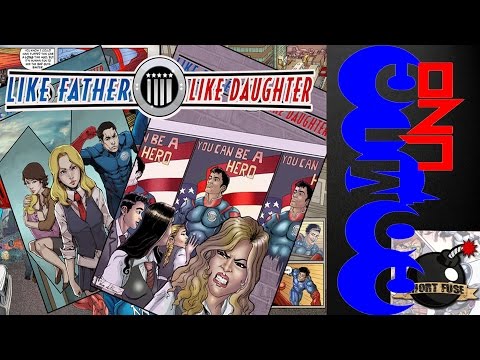 But it was Kat’s college career that helped her start her first comic book. In her screenplay writing class, Kat began a screenplay which would later be transformed into her first comic book, Like Father, Like Daughter. The story of Like Father, Like Daughter features a single mom and her daughter, Cassie. Cassie’s dad is the world’s only superhero. In order to do what he saw as right, Cassie’s father left her and her mother to become a fulltime superhero. Now, Cassie must learn to cope without her father there… and with several other super surprises as well!

“I knew with this comic I wanted to make a grounded story about family,” Kat shared with me. “I wanted to explore of course your traditional family mother, daughter, father. As the comic continues you will see a non-traditional family kind of form also through the friendship of Cassie, Steph, and Wes. I also wanted this book to kind of poke fun at the comic book superhero genre but of course at the same time respecting it.” The comic book takes place in Kat’s hometown, Staten Island, because Kat believes there aren’t a lot of superheroes associated with Staten Island versus other places in New York such as Manhattan.

Kat also interned at NY1, a news station. “When I interned at NY1 I worked with the living unit department. So entertainment, broadway, science, etc. I worked alongside one of the producers of the Living Unit department. NY1 gave me a lot of opportunities in the television journalism field. It was a great experience.” While Kat may have left NY1, they did recently feature her and her comic project on their news station in a story entitled “For Local College Student Superhero Assignment Takes Off.” 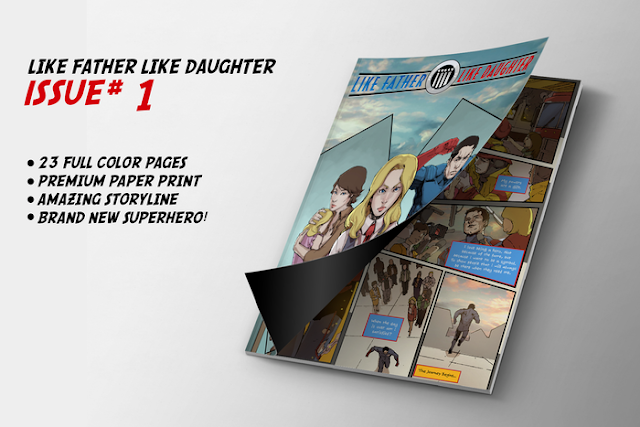 Kat is currently a college student majoring in communications. She hopes to work in television and write even more comic books. According to Kat she wants to “Build Comic Uno into a brand.” Her fellow writers and Youtubers on Comic Frontline think very highly of her. One Youtuber, Jay El, had this to say about Kat’s work: “Kat is a total professional. She is the master or mistress of dedication getting her stuff done on a regular basis. She also has keen eye for marketing with knowing what will get views and how to promote.”

When I asked Kat what advice she had for aspiring writers looking to get their work published, she said: “My YouTube channel really helped me get published because I used Kickstarter, but my best advice is put yourself out there. Get a twitter, interact with your favorite writers. Let people know your name.”

Kat is a young woman I very much admire as an aspiring comic book writer myself. She’s already achieved so much in 20 years and still has so much more to offer both the comic book world and the television industry. The name “Comic Uno” is synonymous with Katherine Calamia, now a published comic book writer whose future is looking super.