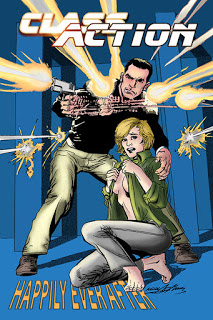 From the minds of Neal Adams and Amikael, from publisher Scout Comics, produced by Deadline. Following Solarman, also from Scout Comics & Deadline, Class Action is a new title that brings no nonsense, nonstop action to the party.

The worlds greatest super villain Jon Smith – an alias naturally – is about to marry the unsuspecting Sarah Wesson, the sexy young heiress to the Carbonite INC billion dollar empire.

Jon has ben pardoned by the government to save Carbonite INC from his own creation, the crime organisation “ALITE“. Only his very special brand of ruthless genius has a chance to do that. Sarah is now caught between the two beasts, and knows nothing of the storm that is brewing around her. Will love conquer all? Will Sarah wake up to the truth? And what will she do, if so?

Class Action sold out at New York Comic Con, with all copies signed by Neal Adams, and was then solicited in black and white through Diamonds, but the order numbers escalated to the point that it was decided that color would be required to do right by the readers and this title. It was thus cancelled and is now being resolicited in full color and with a brand new exciting cover by comics legend Neal Adams.
The time has come for Jon Smith to show his real colors.

Let us know in the comments what you think of this announcement and don’t forget to follow us on Twitter for the latest Previews, Reviews, News and Interviews!