“Imagine the Joker came to a Gotham WITHOUT Batman?” writer John Lees declares. Yes, Oxymoron: The Loveliest Nightmare promises to be a thrilling crime/horror story reminiscent of Hannibal and Se7en. It is a sequel to ComixTribe’s previous Oxymoron mini-series about a contradiction-obsessed serial killer.

The sequel mini-series will be written by The Red Ten writer Tyler James and John Lees, writer of And Then Emily Was Gone (and who I previously interviewed on Kickstart the Week(end) for The Standard). The mini will also be drawn by Alex Cormack (Find) and complemented by Jules Rivera’s colors.

Lees comments that Oxymoron: The Loveliest Nightmare will act as a “Year One” story that new readers can follow. The protagonist is Detective Mary Clark. After her partner dies, Mary is demoted to being a street cop. She suffers from a chronic illness, hates the uniform and her young partner. She is a pariah among the rest of the police department. It’s the Oxymoron case that bring Mary back into the action. 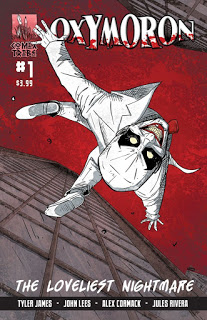 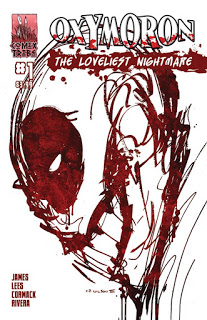 A masked man jumping off a skyscraper is the first step in the master plan of a killer planning to correct the corrupted city of contradictions. Mary hopes solving this case will be the key to getting her Detective badge once again.

Oxymoron: The Loveliest Nightmare will be released on August 26th, 2015. For a preview readers can pick up ComixTribe’s 2015 Free Comic Book Day comic AND THEN EMILY WAS GONE #0. This will also include an all-new Oxymoron short written by James and drawn by Cormack.