Dynamite Entertainment previously announced they would be relaunching Will Eisner’s The Spirit. More details on the creative team and the series have been announced.

Will Eisner’s The Spirit will feature a twelve issue story arc. The writer is Matt Wagner (Batman/Superman/Wonder Woman: Trinity, Grendel) and the artist will be Dan Schkade (San Hannibal). Brennan Wagner (The Shadow: Year One) will be doing the colors. Each monthly cover will be drawn by Eric Powell (). The first issue will have variant cover art from Matt Wagner, Alex Ross (Kingdom Come) and John Cassaday (Star Wars).

The series is set during the same time period as the original Spirit comics from the 1940s. The Spirit has been missing for over two years now and is presumed dead. Commissioner Dolan, his daughter Ellen, Ebony White and Sammy are trying to uncover the truth and find his killer. 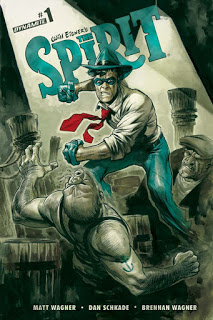 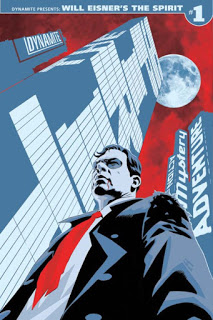 Wagner talks about the effect Will Eisner’s series had on him: “I first discovered Will Eisner’s The Spirit stories in my early teens and the effect was devastating and inspiring, all at the same time. I can honestly say that I’m a comics creator today due to the powerful effect Eisner’s artistry had on my formative years. We’ve got a great team on this book with Dan Schkade and my son, Brennan Wagner, providing the interior art, and my longtime pal Eric Powell as the regular cover artist. It’s a real privilege to have the chance to add to the time-honored legacy of this iconic character!”

Schkade shared his thoughts on the protagonist of the series, Denny Colt (aka the Spirit) and explained his eagerness to draw the characters: “I’ve been a fan of The Spirit for half of my life. He’s the perfect American hero: this laughing, self-made, middle class outlaw who serves his community, stands up to bullies, and loves life like only a dead man can. I’m honored, humbled, and more excited than I can describe to be working on this incredible revival.” 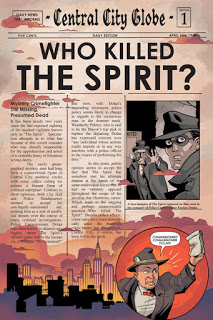 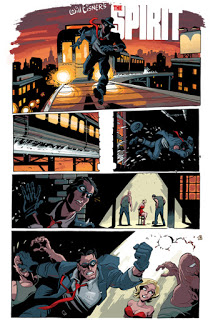 The concept of this new Spirit series sounds difficult to pull off. It sounds like we won’t be seeing a lot of the actual Spirit if we’re supposed to believe he’s dead. But when comic characters are dead that usually means they’re just a few issues away from being resurrected or retconned to be alive again or not really dead after all… I’m betting on the last one being revealed by the end of the first issue.

Will Eisner’s The Spirit #1 will (hopefully) come back to haunt readers with his good looks and charm this July 2015 at SDCC. It will be available to reserve in your local comic book store or can be purchased using Comixology, iVerse, or Dark Horse Digital.