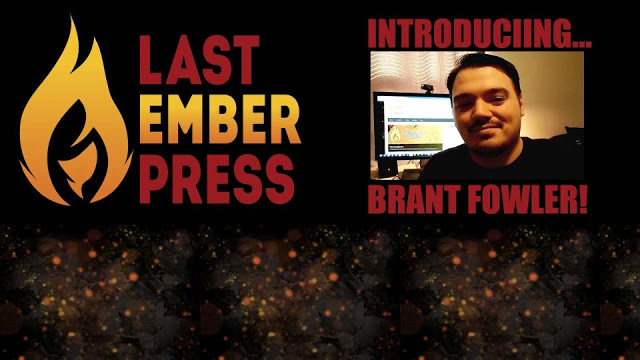 Brant Fowler, and Lisa Moore are names you may already know from Comic Frontline. We are proud to count them among our number here. Brant also hosts a podcast named Zone 4 and for the fans of that show the name John Wilson is known to you also. On April 7, 2015 the three of them launched an exciting new chapter in their lives LAST EMBER PRESS, their own comic studio for the next few days I am going to spotlight each of them in their own words so you can get to know them before LAST EMBER PRESS makes its debut at Derby City Comic Con Con June 20-21, 2015. First up? The Man, the Myth, the Legend; Brant “The Gonzogoose” Fowler HONK!

“To expound a little bit on my background, I started drawing when I was about 5 or 6 years old. I began tracing school folders, then broke out to full drawing. I even drew Transformers during school and hid them in my schoolbox! So I guess you could say I was always the creative type.

As I got older, I discovered comic shops, and that changed my whole world. I knew what I wanted to do for a profession – I wanted to be a comic book artist! So I began drawing every day. I would buy these 9″ x 12″ sketch pads and draw full comic issues in them featuring either characters I created or spin-off stories from other properties, like G.I. Joe. I would draw for hours on end and I loved it.

When I was about 18-19, for various reasons, I got out of comics completely for several years. I would keep up with the news from time to time, picking up a copy of Wizard (I didn’t have a computer or internet at the time), or looking at Digital Webbing in the college library. In 2000-2001 I was pulled back in by the two things I mentioned in the video: the new G.I. Joe series from Devil’s Due, and Crossgen. I’ve told those stories and my love for Crossgen books many times on podcasts and in columns, so I won’t bore you here with all that.

Long story short, I found myself collecting and reading comics again. And working with an indie studio first as a managing editor and eventually as Editor-In-Chief. The company had over 200 people working on projects, but never produced a single book. So many of us left. A very long story, but I met good people then that I have kept up with.

In 2002, I came up with a concept for a comic that I had to explore. Marvel had reopened their EPIC line for creator-owned material, and so I put together a few scripts and the whole pitch and sent it off. I got very positive feedback, but they thought it needed work. That same idea I eventually got pretty far with in a competition that saw my story get published. After that, I did a full issue and self-published it. It was called WANNABEZ. And it will be returning here at LEP at some point!

Along the way, I also managed news and press content for several websites, even made a living on one for a while. I eventually landed at Comic Related, where I would go on to become a co-owner and meet two brothers from other mothers, LEP’s own John Wilson and CR founder Chuck Moore.

Somewhere in there, I worked for Haven Distributors, which has since closed shop. They had bought Cold Cut and grown the business, but Diamond is a beast.

In recent years, I became a member of a YouTube review group that started as Dark Avenger, INC. In February 2014, we launched a new channel and accompanying blog, Comic Frontline. I don’t review much anymore, but I’m still heavily involved with the group and appear on the weekly live show as much as I can.

I started lettering way back in 2001-2002 thinking I could save money on my own books. I picked up the trade pretty fast, at least the basics, and started getting contacted for work. So it kind of grew from there, and I found myself lettering other people’s stuff for nearly a decade and a half! I worked on two Image Comics titles through the Shadowline imprint, Descendant and Zombie Cop. I’ve worked on Jack Hammer and Fight Like a Girl in different capacities for Action Lab Entertainment. I have lettered everything Assailant Comics has ever published I believe. And many, many others.

Flatting wise, I fell into that as well, thanks to Lisa, who was mainly flatting at the time. She has since gone full-blown coloring and just does flatting on the side. I also just dabble, but may be doing more in the near future. I flatted the first five issues of the New 52 Legion of Super-Heroes series, and I’ve worked on titles from the Hulk, to Sonic the Hedgehog, to Spider-Man, to the Justice League, to Green Lantern, to Invincible, and more.

Bottom line is that I love comics, and one way or another, I’ve found myself involved with or working on comics for the past decade and a half. And my love for the medium, as detailed, goes way back, long before that. I love what comics can be and can do for a reader. I love creating worlds and characters, and telling fascinating stories with them. In many ways, I feel like this progression was always supposed to happen, and now here we are!”


About Last Ember Press
Last Ember Press is an independent comic studio founded by Lisa Moore, Brant Fowler, and John Wilson. Our mission is to tell stories in new ways from the unique perspective of seasoned (you know, salt, pepper, paprika) comic creators exploring the essence of the independent palate (sweet, sour, umami?). We strive to turn the old notions and concepts behind comics on their ear (blazing trails and all that – get it, “blazing,” “ember”…) and make books that are both familiar and innovative all at the same time. We hope you’ll join us on this crazy ride and we promise to only crash every other Thursday or when the squirrels come out (squirrel stew, anyone?).
.
To find a comic shop near you, visit Comic Shop Locator or call 1-888-comicbook.