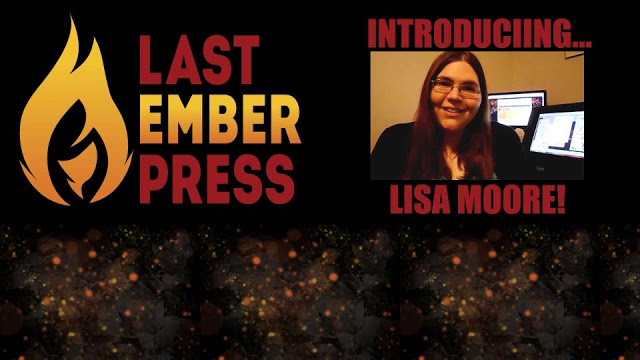 Lisa Moore, and  Brant Fowler are names you may already know from Comic Frontline. We are proud to count them among our number here. Brant also hosts a podcast named Zone 4 and for the fans of that show the name John Wilson is known to you also. On April 7, 2015 the three of them launched an exciting new chapter in their lives LAST EMBER PRESS, their own comic studio for the next few days I am going to spotlight each of them in their own words so you can get to know them before LAST EMBER PRESS makes its debut at Derby City Comic Con Con June 20-21, 2015. Today Lisa Moore takes center stage with her trademark smile and giggle that makes her fit right into her upcoming book FAERIE STORIES. Tee Hee!

“To expand on myself a bit I figured I would start with how I got into coloring comics.  I sort of stumbled on to it one day on DeviantArt.  I was into web and graphic design and did that as a freelancer for several years, so I was always looking around the job section of the site.  Well, someone was looking for a comic flatter.  I had no idea what that was exactly, but I did some research and thought I could do it.  She gave me a chance at the job and I basically never looked backed.  In case your wondering, flatting is the process of filling a page with base colors and separating all of the shapes to make selecting areas on the page easier when you’re coloring.  I did that exclusively for a over a year, maybe even a bit longer than that.

Once I realized how much I enjoyed that, I began researching how you actually color comics.  I bought books, watched videos and basically just sat down and practiced in all of my spare time.  Once I thought I could do a passable job, I started applying for work.  Thankfully, again, a few kind people took a chance on me.  One of my favorite early jobs was a Zuda competition entry, Spy6Teen.  Brant and I actually worked on that together and is the entire reason we met! 🙂  That eventually went on to become a fun webcomic that we both worked on.  You can check it out at Spy6Teen.

After a few years of doing odd jobs here and there, Chris Sotomayor (a friend and colorist I work for flatting) recommended me for a job at BOOM! Studios.  It turned out to be Darkwing Duck and I was soooo excited, you have no idea, I was ecstatic!  Working for a Disney property in any capacity was a dream come true!  I was with that series for a good run, and when it ended and BOOM! introduced the KaBOOM! line of all ages titles, they kept me on.  Over the years I’ve worked on Adventure Time, Garfield, Peanuts, Snarked, Regular Show, Bravest Warriors and who knows what else I’m forgetting. lol  I’m so happy to consistently be able to work in all ages comics; it is what I truly love to do.  It’s the main reason I’m pursuing Faerie Stories, I want my work to have a place in kids’ lives!

Wow, that’s a lot about coloring!  I’ll jump back in time a bit and let you all know how I was introduced to comics.  I’m not the typical comic fan.  I didn’t read super hero books; I might have if I knew they existed though!  No, I was much more of a newspaper strip girl.  I adored (still do in fact) Peanuts.  It was and will likely remain my favorite strip of all time.  I also read Garfield as any kid would I’m sure. 🙂  For a while I was stuck on Calvin and Hobbes. Those are the big 3 that I was into as a kid/teen.  Still love them all!

I didn’t actually start reading comic books until I started working in the industry.  So I have a lot to read to make up for all that lost time!  So wish me luck and shoot me some trade recommendations if you wish.  That’s my preferred method of reading.

I think I’ll close with that and just keep my intro in the comics realm.  Thanks so much for checking this out, and if there’s anything else you’d like to know please feel free to leave a comment and I’ll answer as best I can.  If something major is asked I’ll post up another blog post answering the question in the future.”

About Last Ember Press
Last Ember Press is an independent comic studio founded by Lisa Moore, Brant Fowler, and John Wilson. Our mission is to tell stories in new ways from the unique perspective of seasoned (you know, salt, pepper, paprika) comic creators exploring the essence of the independent palate (sweet, sour, umami?). We strive to turn the old notions and concepts behind comics on their ear (blazing trails and all that – get it, “blazing,” “ember”…) and make books that are both familiar and innovative all at the same time. We hope you’ll join us on this crazy ride and we promise to only crash every other Thursday or when the squirrels come out (squirrel stew, anyone?).
.
To find a comic shop near you, visit Comic Shop Locator or call 1-888-comicbook.