This time Kickstart the Week is featuring the Kickstarter for The Legend of Everett Forge. This western steampunk adventure follows the outlaw Everett Forge as he faces off against robots. Join the Wild West ride as you read about the Kickstarter and my interview with the writer/creator Scott Wilke.

Everett Forge, with the help of his trusty guns and steam trike, sets out to take on the robots controlling the West in the year 1889. He is out to kill the Machine that betrayed him, the ruler of the West, Omega. His quest leads him deeper into the Machine Territory than any other human before him and he comes face to face with the vicious bounty hunter known as the Angel of Death.

While Scott Wilke handles the writing, the art team at ClickArt Studios will be doing the illustrations. ClickArt Studios is a Philippine based multidisciplinary creative studios started in 2008 by Rai and Ochie Caraan. Their team have a variety of talents in graphic design and 2D illustration.

The Legend of Everett Forge is a six issue mini-series. The Kickstarter is for pledging money to ClickArt Studios so the entire creative team can start working on issue 2 and other extra merchandise. The project will only be successful on Kickstarter if $6,000 is raised by July 10th, 2015 at 2:32 pm EDT. You can pledge money on their official Kickstarter page.

Please enjoy my interview with Scott Wilke, creator and writer of The Legend of Everett Forge.

Me: Why did you decide to mix a western and steampunk story together?

Scott Wilke: Truthfully, I just wanted to see a story about robots in the Old West! Haha! It has been an idea in my head for over 10 years now. No matter how many other stories I wrote, I always revisited this one. It’s just such an interesting concept to me to explore how robots would fit into the 1800’s. How would society react? How would the robots react? Where would their place be? I thoroughly look forward to delving into these questions as the series goes on.

Me: So Everett’s Steam Trike, already a rad bike, can turn into a four-wheeled vehicle which can hook onto railroad tracks? How did you get the idea for this unique vehicle?

Wilke: Figuring out a method of transportation for the world I was creating was definitely a hurdle early on. With some machines weighing upwards of almost a half a ton, I knew horses were out of the question. I didn’t want to go with steam-driven robotic horses, as I’ve seen that done quite a bit. So naturally, I started to work with the idea of steam bikes. Once I settled on that, I wanted to make sure they had some level of practicality. Considering much of the West is still undeveloped at this time and most areas are only accessible via railroad tracks, it made sense to give these vehicles the ability to utilize the tracks if necessary. 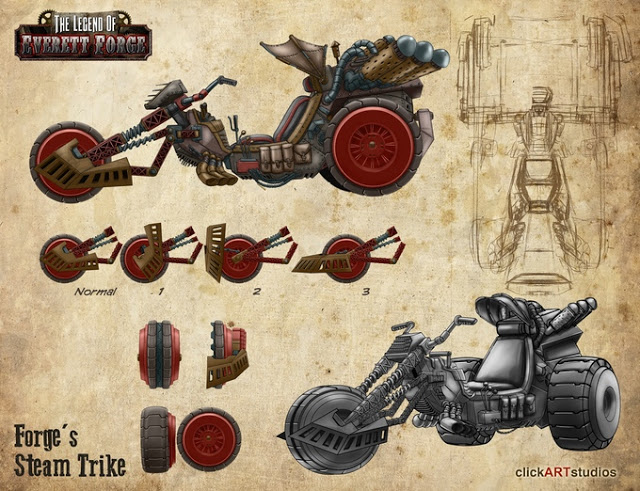 Me: Westerns typically have classic archetypes like the gunslinger, the sheriff and the hooker with the heart of gold. Who represents some of these archetypes in your story? Or do you create some new archetypes?

Wilke: Issue #1 starts off as an homage or a love letter, of sorts, to all of my favorite westerns. So, within this issue you will definitely see some of those classic Western archetypes like the gunslinger, sheriff, bartender, and the overly-suspicious townspeople. About a quarter of the way through the issue I will have introduced some characters and things, that I believe, are anything but archetypal. I think that is what makes The Legend of Everett Forge so unique though. Every issue will have a little bit of the familiar mixed in with a whole lot of the unfamiliar!

Me: If Everett Forge got to spend the day with one other western outlaw from any medium, who would it be and what would they do?

Wilke: That’s a tough one as Forge isn’t much of a people person! I guess I would say Rooster Cogburn from True Grit. As for what they would do, I think they would probably just sit around and drink all day! There is actually a character within my story that is similar to Cogburn, he goes by the name of Aces King. King is kind of a surrogate father to Forge as Forge didn’t have a great relationship with his own father. So I can actually see Forge and Cogburn getting along quite well. 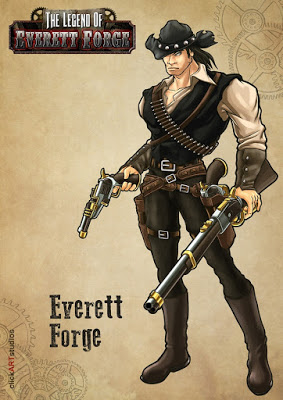 Me: What is some of the other “quirky” technology we can expect to see in The Legend of Everett Forge.

Wilke: There will be a character introduced in issue #2 who is kind of a mixture of Q from James Bond and Kaylee Frye from Firefly. She is responsible for a lot of the quirky tech that we’ll find. One of her inventions are Forge’s Colts. They have magnetic accelerators built in, which helps his bullets pierce armor plating. There’s a lot more tech in Forge’s arsenal, but I’d hate to give too much away. Keep an eye out on our Kickstarter and Facebook page as we plan to reveal more over the coming weeks.

Me: How did you find out about and get in touch with the art team at ClickArt Studios and how would you describe their artwork in The Legend of Everett Forge?

Wilke: I found ClickArt Studios after I had posted an ad looking for an artist collaborator to work with on my Steampunk Western. At the time, I had done a motion comic using my own horrific art skills, Paint, and iMovie. I used that as my pitch. ClickArt Studios replied to my ad right away. Looking over their art samples and seeing their excitement for my story, I knew I had to hire them. Their artwork manages to provide life and vibrancy while still maintaining the dark, gritty nature of the world it takes place in. 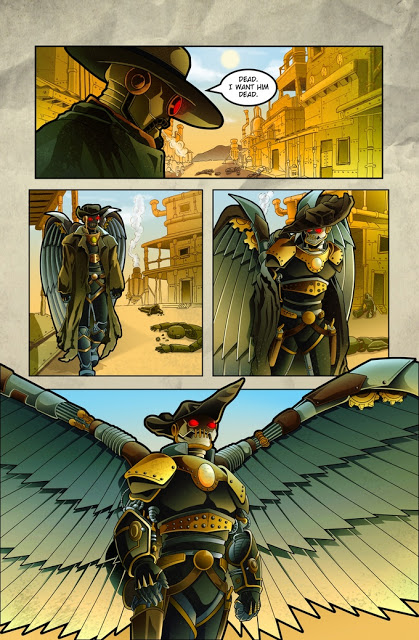 Me: What inspired your love for westerns and robots?

Wilke: I would have to say my parents did. They love Westerns, so growing up, I would watch movies like The Magnificent Seven and The Good, The Bad and the Ugly. I was just so drawn to the era. It was a world of lawlessness. A time where men became legends and the lines between good and bad were so blurred, that even the outlaws are revered to this day. My parents were also big sci-fi fans, more specifically, Star Wars fans! I just remember watching those movies when I was younger and thinking R2-D2 was the coolest thing ever. He still is!

Me: Oftentimes westerns are overlooked by readers in favor of superhero comics. Why do you think that is?

Wilke: I think there’s a stigma associated with Westerns nowadays. The younger generations typically view them as being meant for “older people.” This is understandable, as Westerns were really at their peak back in the 1950’s through the 1970’s. Thanks to films like Django Unchained and video games like Red Dead Redemption, people are starting to see that Westerns aren’t just your grandparent’s genre anymore. 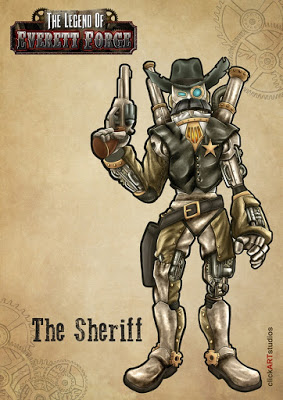 Me: Do you have any suggestions for good western comic books, novels, movies, etc. that would get people more excited for the genre (other than The Legend of Everett Forge, of course)?

Wilke: I am a big fan of The Sixth Gun by Cullen Bunn and Brian Hurtt. The characters are well-written. The story is exciting. And it plays out like a movie. Movie-wise, I would highly suggest Django Unchained. And of course, I think everyone needs to play Red Dead Redemption at least once their life. A remarkable example of a well-executed Western story!

Wilke: Just go for it! For years, I would always tell myself, “I’m going to get around to writing that comic book one of these days.” One of these days just never ended up coming around. It wasn’t until my dad was diagnosed with cancer that I realized that you can’t keep pushing off following your dreams, because you never know what life has in store for you later down the road.  After that, I put myself out there, found ClickArt Studios, and here I am today. Even if this Kickstarter isn’t successful, I’ll be back again, and again, and again. Until the day I can finally see my dream come to life.

Me: Thanks for sharing such a personal moment of your life with us and for turning such a life-changing experience into inspiration.

2 Thoughts to “Kickstart the Week: The Legend of Everett Forge”