Legacy Code is being published by Short Fuse Media in every format imaginable: a full color comic book, an animated teaser trailer, a side scrolling video game demo, action figures, costumes and a Tabletop RPG. I am showcasing this gigantic project on “Kickstart the Week” with the creator, plot writer, publisher and operations director Sean Mack.

Legacy Code: Inception will be a 25 page limited edition comic book that launches a new universe. The series is based on characters and storylines from LegacyCodeOnline.com.

This will be the second publication from independent comic book publishing company Short Fuse Media Group. The publisher creates customized comic books and other pop culture merchandise. Their first comic book, Like Father, Like Daughter, was created by our very own Youtube sensation Kat Cal (aka Comic Uno).

The board game will be created by Caias Ward and called Legacy Code Universe: The Role Playing Game. This tabletop RPG is designed similarly to Caias’s previous projects Trigger Happy and Riders. In this game, you can create your own character and become part of Legacy Code’s universe. The RPG guide is about 90 pages long and will feature exclusive artwork from Team Short Fuse. You will have the option to see the character you create rendered by Short Fuse media in the “Legacy Code: Profiles” booklet.

Kickstarter will help mass produce Legacy Code to the public. If the project reaches $18,000 before it ends on July 27, 2015 at 11:59 PM EDT, Legacy Code will be successfully funded. For $5 you will get a digital copy of Legacy Code: Inception. At $15 you will receive a printable PDF copy of the RPG. To pledge their project, check out Legacy Code’s Kickstarter. For more information, go to their official website.

I also interviewed Sean Mack, the creator and plot writer for Legacy Code: Inception as well as the Publisher and Operations Director for Short Fuse Media.

Me: Can you tell us the story behind why it was decided to make Legacy Code not just a comic but also a cartoon and video game as well as to create toys, costumes and a RPG for it?

We really wanted to build an entire universe where stories could be expanded on through different forms of media and felt this would be the best opportunity to do so. Couple that with the ability for fans to join the universe, our goal was to create the first fully interactive comic book universe that the fans could assist in expanding on as our fans can be characters in any of our offerings whether it’s comics, video games, cartoons or action figures.

Me: How would you describe the story of the comic book for Legacy Code?

The first title that is being released in print format is Legacy Code: Inception. This story revolves around a third global war that is pending between various factions that could possibly result in the end of humanity itself. The hero of the story, Zonar, finds himself on a quest to save a child that may be the key to ending the war.

Me: Who are the main characters and what are their personalities like?

There are two primary factions in the Legacy Code Universe. There is the United Global Authority which was founded by the Engel Corporation. They have branded themselves the saviors of humanity as they have been instrumental in trying to rebuild the planet after the first two wars. But they have some dark secrets that the public is unaware of. They are led by General Tyran (Engel) and his brothers Lord Bozz (Engel) and Commander Trion (Engel).

They are opposed by people who are referred to as rebels. Rebels are people who have been classified as outlaws by the United Global Authority and are consistantly hunted to be brought to justice. Some of the rebels are Danika (CBG19) and her trusty War Robot who escaped the control of Lord Bozz together with the help of the “evolved human” known as Zonar. Zonar has abilities greater then that of a normal human coupled with bionic enhancements that were added to him as a result of being a prisoner of Lord Bozz. These three formed the first cell of rebels to oppose the Engel Corporation and the United Global Authority.

Me: Why was Short Fuse Media created and how did the publisher get its start?

Short Fuse Media Group started off as a graphic design company headed up by my best friend Larry Walker (Art Director) and myself. Larry created the character of Zonar when he was a child with a dream of turning the character into a comic but he struggled to write a story to go along with the character so he never did anything with it. My son is an avid comics fan so I decided to have him turned into a comic book character as a poster for his 10th birthday. I asked Larry to create the image and to make Zonar my son’s protector on it.

My son loved the poster and from there showed everyone that he could. Following that we decided to create Legacy Code as a comic so that my son could have his own comic book, Larry could finally see his character featured in a comic and both Larry and my son could have their dreams come true.

We figured, why stop there when we could build a universe where everyone who wanted to be a character in a comic book universe could have the same opportunity? We built our brand by producing custom comic books for clients and we placed all of those stories in our Legacy Code Universe. With the launch of LegacyCodeOnline.com, we have now began to release those stories to the masses.

As far as publishing, our intent was always to have more than just our Legacy Code titles, and as we brainstormed on coming up with a super hero story of our own, we stumbled upon a video from Comic Uno looking to find an artist for her comic book that she had written, Like Father, Like Daughter. 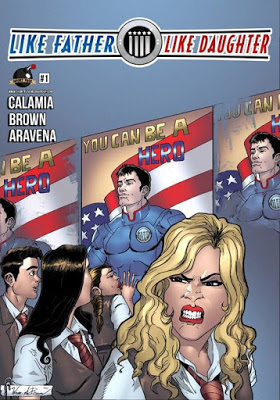 We loved the story and collectively decided to make her book the first published release from Short Fuse Media Group.

Me: You have a variety of jobs over at Short Fuse Media—writer, publisher, operations director—it’s impressive! How do you manage to stay on top of everything? Do some of those positions have priority over others?

I honestly have a lot of help. Because Legacy Code hits so close to home with my son being a character and my best friend’s childhood character as the star, I made the decision to write out the plots for where the story needed to go. But we have brought on a ton of writers to help flesh those stories out like Comic Uno, Jocelyn Potter, Casey Van Heel, Phil Buck, Chuck Amadori and I’m sure a few others that I might have missed. For Legacy Code: Inception, we even brought on Blake Northcott to serve as editor. So as far as the writing goes, I try to surround myself with talented individuals that can help tell the story that I want to tell. I equate it to what Kevin Fiege does with the Marvel Cinematic Universe. He knows the direction that he wants the characters to grow in within each film, but he brings on talented directors to ensure the job is done right.

Larry, as well as our Financial Director Marisela, keep me on track with most of the aspects that revolve around our publishing line as well as operations. Without them, I wouldn’t get anything done. I also have a phenomenal assistant named Courtney Jackson who jumps in and helps me keep my focus. We’re a fairly small group.

The fact that we operate as both a service business and a publishing company makes things a bit hectic at times as we also produce titles for other creators. So operations can sometime take priority over our publishing offerings as overall, we control the deadlines on those.

Me: Since Short Fuse Media creates specialized comic books where the reader can become a character, how can readers go about doing this and can you list some examples of specialized comics that have been done in the past?

Most of the specialized comics that we have created originated as gift ideas for people who had either partners or children with heavy interests in comic books. The typical request that we received involved turning people into Superman and Wonder Woman. We would then ask the clients how they would feel about being made into their own characters, and joining our universe. The best thing about joining our universe is that your character will have the opportunity to live on in a future story. That’s actually our promise to any new client. The best way to join in on the action now is via our Legacy Code Kickstarter Campaign. Contacting us through our website or any of our social media outlets would be another alternative. A good example of this process would be a story that is featured on LegacyCodeOnline.com right now called “The Engineer”.

The character of the Engineer is actually a client of ours named Kevin. His wife ordered a poster of them and agreed to join our universe. From that order, they have now been featured in their own origin story (which will eventually be printed in our anthology series “Legacy Code: Chronicles”) and have prominent roles in Legacy Code: Inception.

Me: If you had a specialized comic book about yourself, what would you be like and what would the story be about?

Actually I do. My character, Sean Mack, is actually in the Legacy Code Universe. To date, I have appeared in four stories. So “I’m not only the president….I’m also a client!” Lol. My story in the comic is one that is told in the background. I felt it fitting as we try to make the stories for the real people that are in the comics, as similar to their real life counterparts as possible. I lurk in the background of Short Fuse to get things done. So I do the same thing in the comic. But my story as well as everyone else’s story is one that is very unique to me, and integral to the expanded Legacy Code Universe.

Me: What advice do you have for people interested in writing stories?

Find a niche for your story that separates it from everyone else’s and focus on character development. What attracted us to Like Father, Like Daughter was the point of view that the story hadn’t been done before. To explore the point of view of a child who grew up in a single parent home because the father left them to become a super hero…..was an amazing concept.

Me: What advice do you have for people going into publishing?

Make sure you have a good team around you and hire Short Fuse Media Group to produce the product for you. We do AWESOME work and are very affordable.

Me: Thank you for your time Rashaan – I look forward to seeing Short Fuse Media’s universe unfold in Legacy Code!

The Legend of Everett Forge