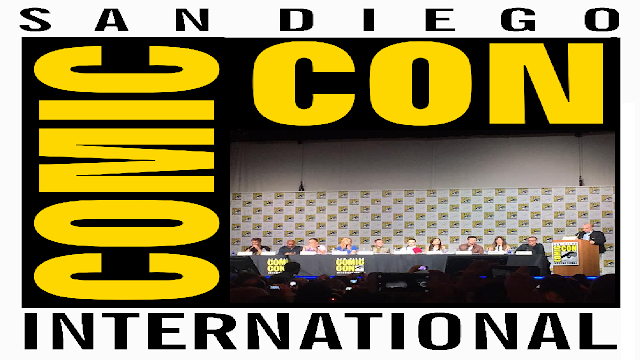 Marvel’s Head of Television, Jeph Loeb moderated the panel and brings you exclusive news and surprises about your favorite action-packed Marvel series on ABC. Jeph Loeb is joined by, showrunners and the cast of Marvel’s Agents of S.H.I.E.L.D. for this can’t-miss panel right from Ballroom 20!

After the Marvel’s Agent Carter portion, the Agents of S.H.I.E.L.D. half of the panel kicks off with a look back at all the huge events of Season 2 of Marvel’s Agents of S.H.I.E.L.D.!.Everything will change. Loeb comes on stage with an extra hand, Clark Gregg comes out to retrieve it. Loeb went on to talk about the excitement of introducing new characters, let alone four new characters, who all stuck around before he introduces them Luke Mitchell, who plays Lincoln, first takes the stage. Henry Simmons comes out next to take a seat next to Luke. Loeb jokes that the next guest should play a character named Nick Blood, but that’s actually his real name. Before she can even come on stage, the crowd starts cheering for Adrianne Palicki, who plays Bobbi Morse. Other than Adrianne Palicki, this is the first SDCC for the panelists so far. Loeb then began to introduce the rest the cast Iain De Caestecker joined the stage, and Jeph reminded the audience that they were known as FitzSimmons, but are now known as Fitz and Simmons, as Elizabeth Henstridge comes out.

“Melinda May is a very complicated character….but if you knew Ming, you wouldn’t know how those two could co-exist.”

Ming-Na Wen took the stage! Chloe Bennet joined the stage! Loeb and everyone else in production thanks their lucky stars that they get to work with Clark Gregg , who joined the cast on stage.

“It’s bloody scary I tell ya. These guys are so good at what they do and so coming on I just wanted to kinda slip in unnoticed. I just wanted to work as hard as I could. It was pretty cool to work with Chloe cause she knows how it’s done. But look everyone made me feel welcomed from the start and it’s a really cool family.”

“Henry who are you on the show?”

Loeb wanted to show the audience some very serious footage, because it;’s a serious show. Just kidding! The footage was actually a bunch of bloopers!
The panel breaks for questions from the audience!