Kingsway West follows the journey of Chinese gunslinger Kingsway Law. He spent 13 years in prison and now he is searching for his wife. Unfortunately, on top of every other trouble he could possibly encounter in the west, Kingsway must aid a woman with a magic sword.

Pak talked about the mini-series and its importance to him in-depth to Comic Book Resources: “I grew up as a half-Korean kid in Texas who spent a ton of time in the woods as a Boy Scout, and I’ve always loved Westerns. That fantasy of an individual making his or her way through a vast frontier just took hold of me from a very young age…

The Old West of Kingsway West reflects all of the social, economic and racial conflicts and tensions of the actual Old West—but it’s also a world in which magic rather than technology drives much of the upheaval… The whole scenario gives us a chance to think about the actual West in a new way—and maybe imagine entirely new ways for America to be born. And, of course, it’s about heroes following their hearts as they make their way through a vast and dangerous frontier.” 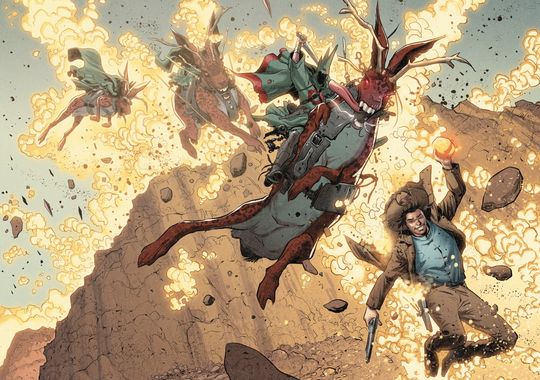 Kingsway West will be a four-issue mini-series with illustrations by Mirko Colak (Red Skull: Incarnate, Turok) and colors by Wil Quintana (Exiles). The entire mini-series can be pre-ordered using a system built by Pak on KingswayWest.com or by contacting their local comic shop directly. Pak hopes this pre-order system will become a staple in the comic book world. The first issue of the mini-series will be released on November 11, 2015.

Kickstart the Week: The Legend of Everett Forge