Just like the cover of this issue, Time Warriors is difficult to forget. It’s a comic book that will make you think. It undoubtedly has it’s time paradoxes, but does it have a strong enough story and characters to make you keep reading?

In a world filled with war, a group of cadets need to die in order to graduate from their academy. But these won’t really be their final hours. In this world, time travel has been perfected so that, after soldiers die (with chips—the datum—in their necks receiving data), someone will travel back in time so the soldiers are alive again while still keeping the vital data.

Yeah, it’s not the easiest concept to wrap your head around. Just writing that summary required me to go back and make sure I got the details right… and even then, there are still a lot of questions left unanswered after this issue is over. This is both a good and bad thing. It’s good in the sense that what’s left unsaid is more than enough to keep the audience interested in reading the next issue. However, that’s only if they’re willing to take in the plot without being bothered by the inevitable paradoxes that are par for the course with time travel stories. Writer Guy Hasson has written some unique and somewhat complicated works (see Wynter), and Time Warriors is no exception. 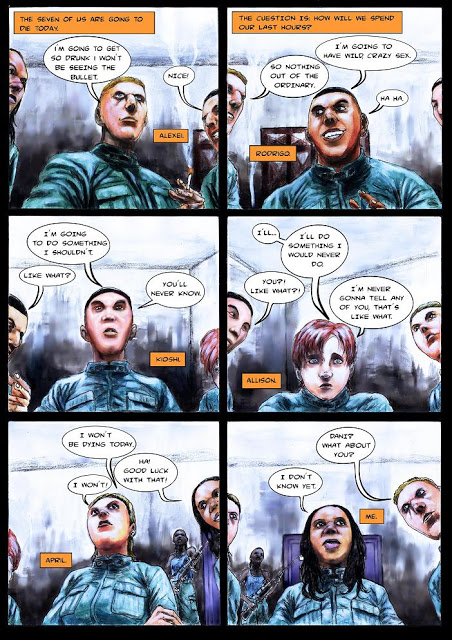 The characters are a bit easier to pin down even if you don’t remember their names, though Hasson was kind enough to write them a couple of times for easy access. This is ironic, considering there are so many characters the issues shouldn’t be able to explore them in-depth. At least not very well. However, what’s ingenious about this concept is that it allows for a great way to learn about who these characters are. You see, these characters are allowed free reign as they wait for their final moments on this earth (at least for a little while). So, these characters can do whatever they want. What a person chooses to do right before they die can be very telling about them as a person, show their inner-self. This gives us a rare look at these characters.

Our cadets are Alexei, Rodrigo, Kioshi, Allison, April, Dani and Raven. My personal favorite character is probably Dani, a narrator in the story who also ties into a mystery that is dropped on the reader at the end of the issue. Again, without spoiling anything, the ending of this comic definitely left me wanting to see what would happen next. You’re bound to remember one character more than another, but all their deaths are memorable in their own ways. I won’t spoil them since I think the best parts of this issue are the final moments in these characters lives.

What helps make these deaths so memorable is the artwork from Juan Manuel Almiron. His illustrations feel very rough but in a way this gives the artwork a raw, powerful feeling. He has a good grasp of shadows that he uses to his advantage to make the situation feel significant. The characters have a realistic painted look to them that, while sometimes off-putting, is definitely going to stick in your head. The cover is enough of an indication of that. Be warned though, there is nudity in this issue. However, this nudity never feels like it’s exploiting these characters. But if you’re uncomfortable with it, be aware it will be there. 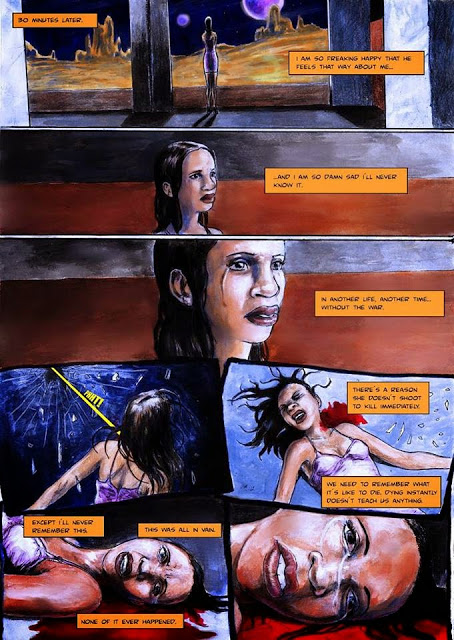 This is a comic book that, if hooked on, a reader will find hard to get out of their head. I revisited this issue a couple of times while writing this and I think my opinion of it actually grew when I read it more. Usually, I review a comic book shortly after I read it but this one made me sit and stew for a good week. A big part of that is thanks to the artwork, but the level of intrigue set up in this issue and the characters are certainly enough for me to recommend this book. Just don’t break your brain wondering about the specifics of time travel.

Characters developed enough to be interesting

Cliffhanger hooks with an interesting mystery

Inevitable paradoxes thanks to time traveling

Some of the expressions are off-putting