As a fan of magical girl anime, I was anxious to check out what many critics are calling Dark Horse’s take on Sailor Moon. Unfortunately, I didn’t think Zodiac Starforce #1 was very magical. But it certainly has the potential to be.

Zodiac Starforce was a team of four teenagers, each one representing a sign of the zodiac: Emma, Kim, Savi and Molly. However, after defeating their major enemy Cimmeria, the team disbanded. Now the girls are more interested in passing exams than they are in saving the world. That is, until Emma gets attacked by a monster and the team is forced to get back together… with some help from an adventure-deprived Kim.

Writer Kevin Panetta understands the magical girl genre but I feel like this issue isn’t really adding anything new to it. He tries to add a spin to it by having the series take place after the team has defeated the ultimate big bad and disbanded, but this actually turns out to be the biggest problem with the issue. 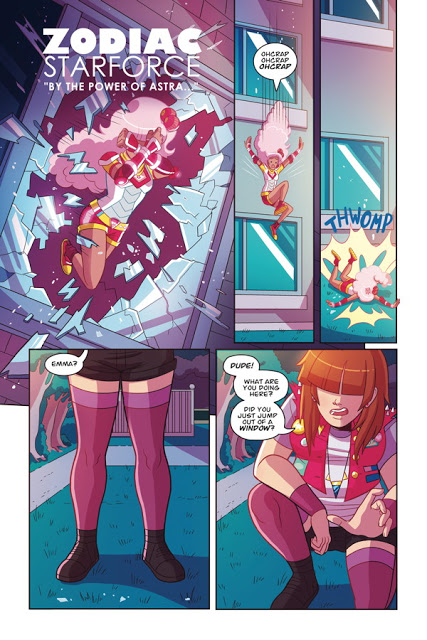 This debut issue feels like a follow-up to a long-running series. The reader is thrown into this story way too late. As a result, most of the dialogue between the girls is exposition about their past. This should be a sequel mini-series. Because it’s not, I really couldn’t enjoy most of the dialogue exchanges in this book. I found myself not caring to read about these characters’ history. The author hasn’t endeared them to me. Show me their past, don’t tell me. The girls’ personalities still aren’t fully defined and I couldn’t even remember most of their names. Maybe with more issues to flesh them out, I could gravitate more towards the characters. But because we’re given mostly exposition, every other aspect of the book was

The actual story of Zodiac Starforce #1 felt buried under the exposition. It does start to get a bit interesting when Emma gets weird flashes when touching a couple of people and it does end on a pretty great cliffhanger.

Astra, the woman who gave the girls their powers, is the closest thing that is unique to the magical girl genre in this issue. Everything else felt very paint by numbers to the genre, introducing nothing new or interesting. But Astra acts a lot differently than I pictured she would. I felt the most emotion for her character—granted that emotion made me want to punch her in the face, but it’s truly a skill for a writer to make a reader feel that strongly about a character right away. If only I could have felt as emotionally charged about any of the other characters in this issue! The closest would probably be Kim, who does have a couple of moments here and there, but I still find her character lacking. She is followed by Emma, who has a lot of emotional baggage that I wish wasn’t just explained in the dialogue. 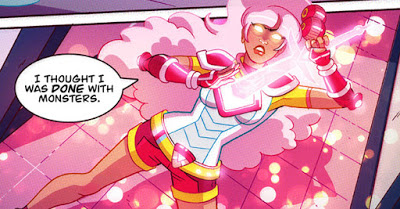 Paulina Ganucheau’s art style does fit this magical girl story perfectly. The character designs are very diverse and interesting to look at. The girls’ costumes are also great and definitely fit the magical girl vibe. The emotions on their faces and the postures and poses they are drawn in add some humor to the issue. Sometimes they even develop the character’s better than any of the dialogue. For instance, when we meet Kim, she puts her hand across her forehead in a kooky pose with “sparkle” written above her head. This really shows her fun-loving nature. The backgrounds are also very detailed and I love how the vibrant color palette makes the artwork really pop for the reader.

If there were to be a prequel series to Zodiac Starforce, and then this were written with fans having read the prequel first in mind, I feel like it could be a much stronger and enjoyable issue. I like the idea of mixing astrology in with the magical girl anime but it hasn’t been explored enough yet. However, if you are absolutely craving everything magical girl and enjoy anime-style art, you may enjoy this. But I feel like there are so many better magical girl manga and anime that you could be enjoying instead. This issue is steeped in exposition, and because that is the author’s main focus, everything else in the book is lacking.