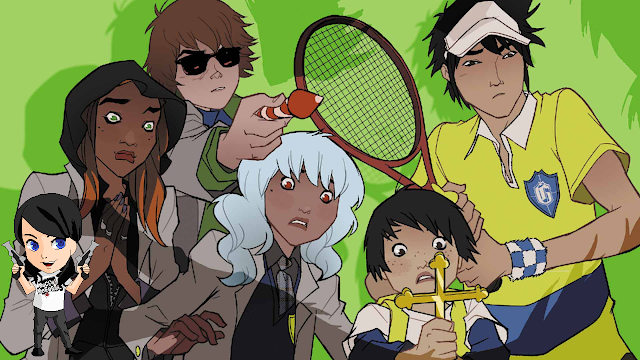 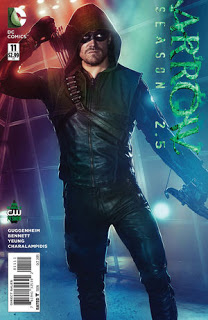 Oh man this art was priceless. I don’t  know what I expected but this wasn’t it. I also love that Laurel has progressively gotten blonde as the series has gone on. Even in the comic!

“It’s like the hundredth time my apartment’s been broken into. I really need to move.”

I see Malcolm really likes Corto Maltese
“I don’t believe you were let inside. Rude.” Man I wish I could kick people in the face any time I thought they were rude.

Over all I thought the comic was cute. The art wasn’t my favorite but I liked the plot and how it fit into the TV universe very well. It had nice “foreshadowing” for season 3 you know for this came out while season 2 was going on. But I digress, I thought this was a fun issue!

What I liked most: The dialogue.
What I disliked: The way faces are drawn, everything else I enjoyed.
Rating: 3.5 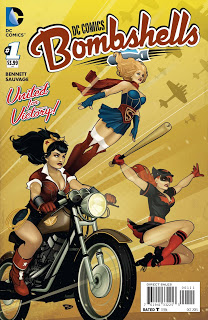 ALL I WANT IN LIFE IS TO SEE MORE THAN HETEROSEXUAL RELATIONSHIPS PORTRAYED AND DC COMIC BOMBSHELLS MUST’VE HEARD MY CRIES BECAUSE ALL I GOT WAS AN AMAZING AMOUNT OF NOT JUST STRAIGHT GIRLS BEING PORTRAYED. ALL OF THE LADIES WERE BADASS 1940’S STYLE AND I LOVED EVERY SINGLE PAGE.

I am in love with the fact this is all based off of the AMAZING DC Bombshells statues! All of the ladies were not taking anyone’s shit and just constantly kicked ass. Seriously this was just a fun, crazy issue that made me really happy. I’ll be sure to keep up with it. Did it have it’s faults, yes but nothing that made me all that annoyed.

What I liked most; Can I say everything? I’m going to go with everyone’s outfits and how much the colors popped.
What I disliked; CLIFF HANGERS.
Rating; 5 out of 5 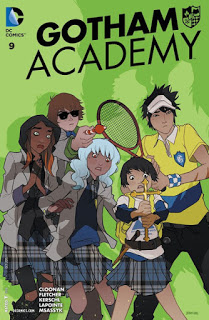 This is a series Jay said I’d love. He sent me issues 1-8 last month and I read them all in a few hours. I now really love this series and can’t wait to start collecting the trade paper backs.

Olive is adorable and I’m excited to see things develop with her and Tristan. Maps is like my inner spirit animal kind of. All of the characters are just really great. It’s rare for me to equally love all of the characters  in a series but Gotham Academy is a gem of a series I’m really happy I get  to read and review.

What I liked most; That we still don’t know everything about Olive. I love that her mysterious back story is a key part of the plot.
What I disliked like most: Cliffhanger from Hell.
Rating: 5 out of 5 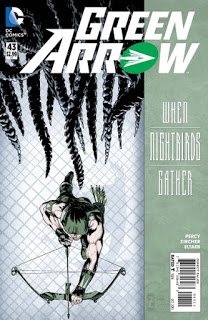 “If only there was a slow, painful, terminal disease that targeted racist psychos.”  This is the Oliver Queen I want to see in Arrow season 4. I haven’t read the current Green Arrow run but this was a totally awesome issue for me to jump in on.  She was adorable and I really liked her.

What I liked most; TEAM WORK!! Ellie and Oliver worked so well together.
What I disliked; Zimm was an OK villain.  Creepy at times but left me with a ‘meh’ kind of vibe.
Rating; 4.5 out of 5. 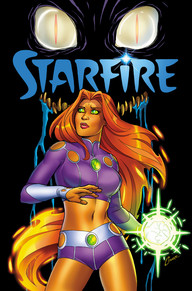 I’m so happy Starfire has a friend! Atlee looks awesome! I mean Starfire has friends but now she will have one that can  relate to her with her powers.

I enjoyed this issue a lot more than 1 and 2.  I feel like the stories were more put together this time around and it had a better “grip” on the characters and there individual voices. I also love all of the cute little picture thoughts Starfire gets from time to time with certain sayings.

What I liked most; Starfire at the restaurant and her sassy remarks.
What I disliked; Not enough Stella.
Rating: 4.5 out of 5. 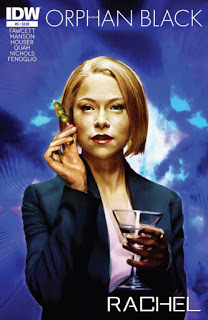 Rachel is such a psychopath but like all of the Clones, I love her. It was great to watch her develop.

Rachel is such a complex Clone. She’s the only one that knew from the start what she was apart of and since she was a kid she was told she can’t have children. Diad I cold. They should have waited until she was way older to tell her that!

Her “parents” tragic death was really fucked up but I loved it. Scenes like that one left me shocked even though I know Rachel doesn’t have the happiest of back stories. I just love how she talks as well.

What I liked most; Paul cameo! And Ferdinand!
What I disliked most: It’s the end of one series but an awesome beginning of another!
Rating; 5 out of 5. 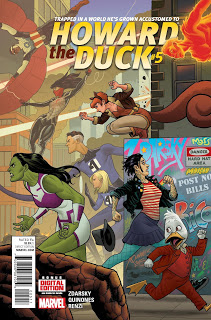 I love the writing team so much. Everything about this issue had me laughing into my pillow as to not wake up my neighbors from my laughter and late night comic reading. I can’t wait for next months issue! Howard and Tara are one hell of a team. Everyone else’s great cameos made me super happy as well. I could go on for paragraphs about how much I loved this issue but I’ll stop.

What I liked most; Spiderman freaking out that he owed Howard.
What I disliked most: Skrull wasn’t the best of villains but he was super freaking funny.
Rating; 5 out of 5. 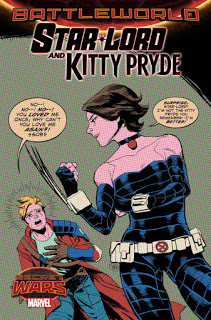 I want to hug the writers and give them treats as a way of thanking them for such a fun and uplifting series. I love that Washington Square Park as a Doom statue on top of the “arch de triumph” type arch way. I love Kitty & Peter’s banter while they are fighting robots.  It made me think of that scene in Pirates of the Caribbean 3 when Elizabeth and Will are trying to get married while a huge battle is going on around them.

I think my favorite thing is how much Peter is in love with Kitty and whenever they are about to kiss and it doesn’t happen he looks so frazzled.

What I liked most; Robot fight scene!
What I disliked most: Not enough Gambit
Rating; 5 out of 5. 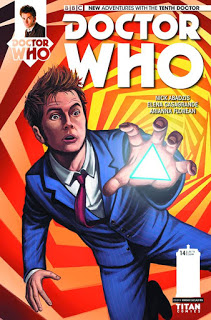 Heroes of the issue: The 10th Doctor, Gabby and Dorthy Bell.
Villains: The Seeker and kind of The Cult of the Black Pyramid: Erik, Hans and Cleo.

Dorthy has taken Gabby and wants to rebuild NYC to it’s full potential while the Doctor, Cindy and the Black Pyramid have been taken by the Seeker

This was a pretty cute issue. Next months is the ‘season finale’ issue of the 10th Doctor’s current comic run. I personally enjoyed Cindy and The Doctor together and Dorthy with Gabby. I wouldn’t mind them being a group of four more often. This wasn’t a total world changing issue for me but It’s worth reading that much is for sure.

What I liked most; Cindy trying to text Gabby throughout the comic.
What I disliked most: Erik.
Rating; 4.5 out of 5 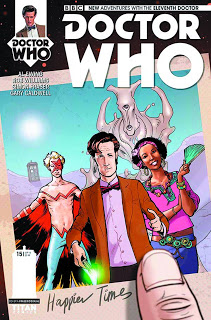 This was the ‘season finale’ of the current 11th Doctor comic series.  Alice, Jones and Arch with the 11th Doctor were an over all cute team.

”Image will always trump reality doctor.” The Doctor’s ‘mother’ aka Talent Scout is a bit of a bitch if you ask me.  Alice was so sweet while the Doctor broke down in the rain. It got me all teary eyed, it was so sweet.

”Alice, I’ve lost everything, I’ve lost my home, why are we running?”
”Because you’ve had your world fall down. And I know how hard  it is to get up again. But I know you, Doctor. And you think on your feet.”

”We can’t go backwords. We can’t be defined by where we came from. We go forward. And we help when we get there.”
This issue gave me a lot of emotional feelings and that my dear reader is why I have the number 11 tattoo’d on my arm. 11 stories make me have a lot of feelings.

What I liked most; How heart felt this issue was.
What I disliked most: The villian.
Rating; 4.5 out of 5. 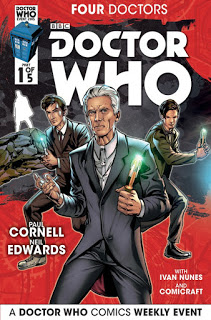 So, this is a weekly comic that I plan on reading. I thought it was going to be really bad to be honest but I ended up enjoying this comic a lot.
Having the Companions of each current series meet up and make entertaining commentary on each of there Doctor’s was cute.

12, 11 and 10 all being in denial of each regeneration was super entertaining. 12 is just so angry and I loved him telling 10 and 11 so shut up because ”Daddy’s talking”. It was just so stupid I couldn’t help but laugh. It was all something I could see happening on the TV show. I kind of wish this was something we got to see in the 50th anniversary special instead.

Clara playing ”boss” with Alice and Gabby was cute. I just thought this was a fun issue and I’m curious to see how it continues!

What I liked most; The Harry Potter references.
What I disliked most: The War Doctor opening.
Rating; 4.7 out of 5 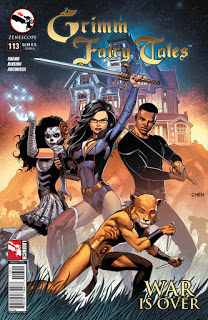 Like last weeks issue, I was pleasantly surprised with this comic. I seriously do plan on buying the trades for this series.
I know this is totally different Grimm Fairy Tales series but its in the same umbrella for me.

The fact that #Shadowgirl was a thing constantly referenced made me happy.  I liked that the schools basically a Zenescope version of Xavier’s Academy. The characters were fun, the art was beautiful and I’m excited to see issue #114!

What I liked most; Skelton girl Mary’s awesome outfit.
What I disliked; I don’t know who the mysterious new student is supposed to make me think of?
Rating; 5 out of 5. 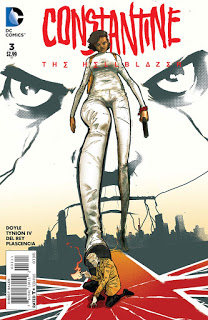 Oh Johnny boy you always piss people off and leave a trail of bodies In your wake. And that is why I love you so. John Constantine is an asshole. He’s not a good guy but he tries. Sometimes.

This issue brought him back to London. I really liked his teen punk days with Gaz and his new lady friends. Georgianna is a kick ass lady and I know she’s in the series from 3 through 6.

I’m going to thoroughly enjoy her and John’s snarky banter  throughout the rest of the “reluctant” team up.

Ming Doyle and James Tynion IV writing with the Vanesa Del Rey and Ming doing the art this time was an awesome add to the issue. The coloring was done by Ivan Plascencia and Lee Loughridge. While I deeply missed Riley Rossmo’s style I love that Ming and Vanesa had some lady power themselves and did some super kickass work together! 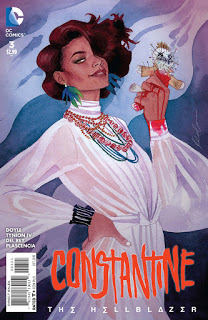 Oh and here’s the Variant cover that I thought was pretty sweet.

What I liked most; Georgiana not taking John’s shit.
What I disliked;  IT ENDED SO FAST. I DON’T WANT TO WAIT UNTIL NEXT MONTH! GIVE ME IT NOW.
Rating: 5 out of 5


My Ranking of the week;