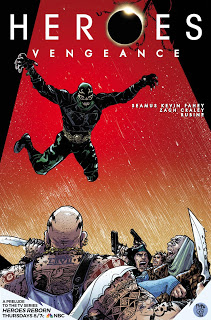 Everyone is talking about NBC’s return of HEROES with HEROES REBORN this fall with a lot of questions about what happened between the original series and the new one. Then you may want to check out Titan Comics’ Prelude to the show with HEROES VENGEANCE #1, comes from the team behind the anticipated NBC series! Written by Seamus Fahey and Zach Craley with art by Rubine. Issue #1 cover by Paul Pope!