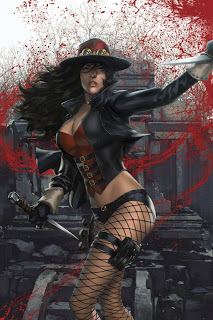 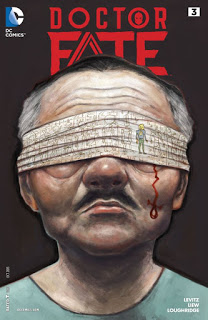 Poor Khalid just isn’t having any luck. It’s biblical style hell in Brooklyn and he doesn’t even want the damn Doctor Fate helmet.  Of course the helmet want’s him. He’s got a flood to deal with and the crazy dog villain to deal with Anubis type dog. Overall, Khalid’s just trying to get through a really shitty couple of days and go to college but Fate has other plans. Poor guy. Great comic though! I really love the art work and how the city and Brooklyn are being drawn.

Favorite Quote:  ”So much for The Exorcist and watching that show about the snarky English magician.”
What I liked most: The Exorcist, Constantine and The Rocketeer references.
What I disliked most: The villain, I want more interactions between Khalid and the villain.
Ranking: 4.5 out of 5 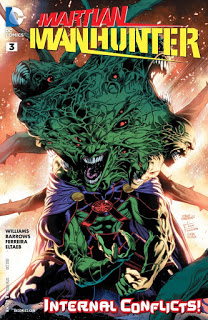 I have no idea why ”Martian Physic War Room” made me laugh so much but it did.  This over all comic isn’t bad, I just don’t know what to do with it. It’s cute and depressing all at once. The art is nicely done and I felt for Agent Wessel this comic.

J’ohn is a cute character and I feel for him. I rather like the plot twist ending even though it did kind of come out of left field.

Favorite Quote: ”When did you fall in love Agent Wessel?” ”None of your damn business that’s when.”
What I liked most: The ending.
What I disliked most: The FBI.
Ranking: 3.5 out of 5 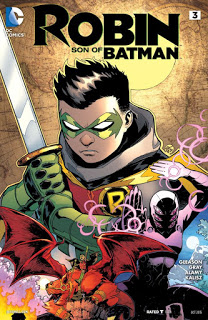 So funny story, after Ras was in Arrow I now read Ras Al Ghul in a slower way than I used to. All I can think of while reading this is ”God Damien you are such a little shit.” but its true, he is one. But he’s also kind in a weird way.  Maya and Damien are cute together in there begrudging friendship. I’m excited to see it grow. I am also excited for Deathstroke in #4!

Favorite Quote: ”We’re all hypocrites if you accept it.”
What I liked most:
What I disliked most:
Ranking: 4.5 out of 5 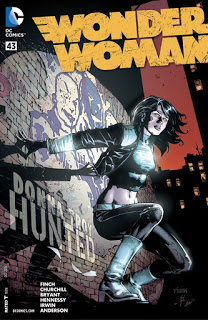 At this rate I really think Wonder Woman is going to be my WCW for the rest of this series. I mean seriously look at her. Donna is also a really cool character that I enjoyed this issue. Strife is GIGANTIC and I love how she looks. I swooned at Diana’s ”Forgiveness isn’t about changing who you are. It’s about finding peace through acceptance. It’s learning to love your whole self. The good, the bad and the Strife.” line. Also swooned when she told Aegeus ”Be warned, there is no power on Earth that will be enough to save you if you harm this child.” Donna turmoil over not being ‘human’ or ‘real’ was very heart breaking to read. I really felt for her character and loved her Amazon outfit.
Favorite Quote: ”I do soooo love a good jailbreak movie. A murderous man-hating Amazon loose in an unsuspecting world. Pop corn anyone?”
What I liked most: Diana’s need to help Donna.
What I disliked most: NOT ENOUGH OF THE ‘VILLAIN’/Cliffhanger
Ranking: 5 out of 5 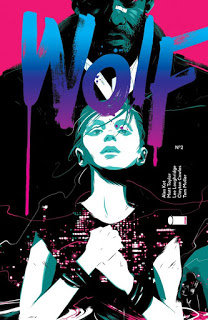 Poor Scottish vampire stuck as a vampire on her menstrual cycle. I was torn between laughing and crying. That’s just evil. Bravo writers. ”Seriously! every day! Poor woman! You should go back, bring her flowers, maybe a bottle of fresh blood.” Freddy is awesome.


I really enjoy this comic. The art is just so pretty and Wolfe is a fun character. Poor guy just isn’t catching a break with women and periods. This is a really awesome world and I’m pumped for next months issue!

Favorite Quote: ”See? We told you we would come back to the vampire thing.” also ”What’s behind the door?” ”Lady trouble.”
What I liked most: This art is so beautiful and that cover is to die for.
What I disliked most: The ending monologue kind of threw my Dyslexic brain off with the accent and or lisp.
Ranking:  5 out of 5 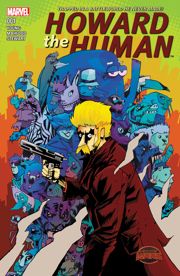 I actually really love Howard as a Duck so seeing him as a human was really weird for me. I loved that he was the only human in a world full of animals but at the same time I just sat on my sofa reading Howard the Human and missing him as a duck. The beried was really funny but Howard still sounded the same so that was nice. Poor guy just wants bacon, eggs but he can’t. New Quack City instead of New York City, cute. Hens Kitchen to meet Mouse Murdock, Jesus Christ. The Punisher as a crocodile and Fisk as a gorilla. All Howard wanted was an egg and the way he got one at the end made me kind of grimace.

Favorite Quote: ”You got no love for storytelling. Fine, your loss.”
What I liked most: The fact Howard talked his way out of everything.
What I disliked most: The art was okay?
Ranking: 3.5 out of 5 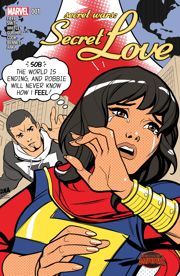 This issue had five stories in it: Guilty Pleasures, Fan of a Fan, Misty and Danny Forever, Squirrel Girl wins a date with Thor and Happy Ant-iversary.

Favorite Quote: CROSSOVER BESTIES 4 LYFE, BRO! and ”Mostly he gets in stupid fights with himself and I just listen.”
What I liked most: Fan of a Fan,  it was my favorite of the stories tied with Misty and Danny Forever.
What I disliked most: Squirrel Girl wins a Date with Thor was kind of weird?
Ranking: 4.5 out of 5 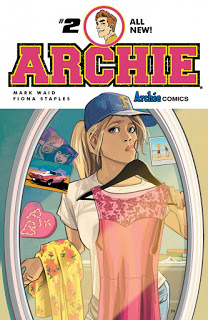 This comic was Archie’s journey of getting a job, Betty being a bamf and saying a big old FU to Trevor and thinking they’d make out because they were alone in her room and her roommate Shelia throwing a  birthday party for Betty to try and get over Archie/also it’s a birthday party. Archie meeting Veronica after bulldozing the house of the construction site he worked at for the day while his friends worked around him to make sure he freaking survived was beautiful. I also liked Betty’s montage of getting ready and when it didn’t go as planned she went and fixed parts of Archie’s messed up car because she stated earlier on that she felt bad that he wasn’t invited to her birthday party.

Favorite Quote:  ”You are who you are, not what people think you are. Be straight. Be weird. Be whatever. Just be what you wanna be and if people don’t like it.”
What I liked most: The beautiful art and Jughead’s back story. Aw the pain. Children suck.
What I disliked most: NOT ENOUGH JUGHEAD!
Ranking: 5 out of 5 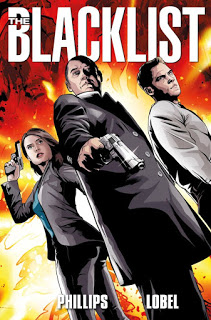 Red deals with the crazy guy called The Gambler whose been manipulating events for a group of super rich gamblers to bet on, Liz and Ressler focus on saving Cooper’s life from a bomb and I fill the current Blacklist hole in my life until it’s return in October. I really love that they explain what certain abbreviations mean, example CBSU being Chemical Biological Sciences Unit. This was a nice and dramatic comic. It really feels like I’m ‘reading’ the television show or reading one of the scripts. The Gambler was nice and dramatic and Red is, as always, amazing.


Favorite quote: ‘‘Lola must’ve liked you, she usually aims for the nose.”
What I liked most: Red’s sass! And Lola.
What I disliked most: The Gambler is great but he’s kind of cheesy.
Ranking: 5 out of 5 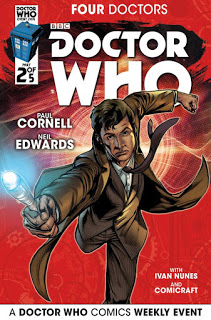 So this is a series I’m enjoying a lot more than the other Doctor Who comics that have happened over the summer. I love the Companion’s all trying to talk to there Doctor and the fact our boys all fight. It’s one big macho show off with no one stepping down really because they just want to be right. I throughly enjoy all of the nicknames each Doctor has for each other. I’m also thrilled with the fact I ‘hear’ 10, 11 and 12’s as well as Clara’s voices, in my head while reading. It’s very cute.
Favorite Quote: ”I was waiting to get all the Reapers. I would never have put you all at risk otherwise. Do you reckon my previous incarcerations will understand that? Baby Doctor and Posh Doctor seem to think I’m Scary Doctor.”
What I liked most: Once again, the Companion ladies stood out in this issue. Lady’s not taking anyones shit is always nice to see.
What I disliked most: While I love everyone talking at once it’s a bit jarring to read everyone cutting each other off in the right order.
Ranking: 5 out of 5 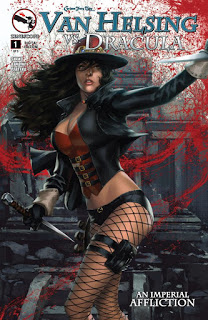 Liesel Van Helsing is a badass lady not taking shit from anyone. Or any vampire for that matter. Marker & Murray’s Den of Words is an adorable title. Poor Mina is always fucked. I really love that Leisel is with Hades. Of course Hades knows Dracula because romance drama has to happen. Also A+ speed changing for Leisel to go from pajamas to her hunter gear. That corset can’t be a quick thing to get into.

Favorite Quote: ”They tell you that the more you do something, the less fun you have. Everything in moderation and all that rubbish. Anyone who knows me knows that I’m not quite the picture of moderation. I’ve been killing vampires for near two-hundred years. And yes, thank you, I do look quite ravishing for my age, don’t I? My name is Liesel Van Helsing. And this is how I have fun.”
What I liked most: The fact Hade’s font is in orange.
What I disliked most: Creepy bugs..
Ranking: 5 out of 5

My rankings of the week: