The First Lady of the United States has the pressures of not just the political spotlight but also the horrific visions she’s plagued with that seem to be seeping into reality. Will she overcome her demons and learn to live as the First Lady? Or will her fear cripple her? Find out in The Eighth Seal.

The Eighth Seal was originally published only digitally on Thrillbent.com, a digital comic book site that was started by award-winning comic book writer Mark Waid (Daredevil, Kingdom Come, Star Wars: Princess Leia) and television writer/producer John Rogers (Transformers, Catwoman–try not to hold it against him, Leverage). Now it is coming out in time for the holidays in print. 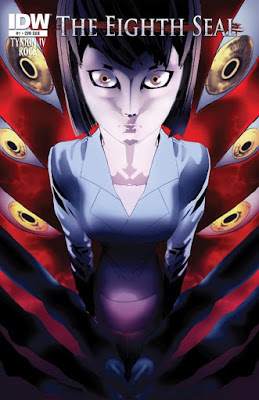 The story was described by Comic Spectrum as The West Wing meets Rosemary’s Baby. James Tynion commented that “The Eighth Seal is the purest work of horror I’ve tackled in my career, and I’m thrilled to see it come to life again in print… There’s nothing more frightening than the distinct feeling that you’re going insane, that something in you has twisted and is pulling you towards your darkest instincts… It’s the fear that something inside of you can destroy everything you love. And when you’re the First Lady of the United States, the stakes are only that much higher.”

IDW Publishing will be printing The Eighth Seal in December 2015—just in time for some holiday cheer! If you want to read some chapters of the series, 1, 2, 3 and 8 are available for free on Thrillbent. If you subscribe, you can read all eight chapters. I’ve read the first three chapters and I’m curious to see how they change the format of the issue since Thrillbent has an interesting digital format. It doesn’t seem like it would translate as simply as other digital comics transitioning to print would. But the story seems really interesting and has some great art, so fingers crossed and hope to die!