Well, not quite. In the All-New, All-Different Marvel Universe, several less-than-successful villains are teaming up under the direction of The Hood. These villains aren’t interested in conquering the world but in getting rich, finding an answer to their boredom and a variety of other personal reasons. This group’s creation and get rich quick schemes will be chronicled in The Illuminati (not the guys with the pyramid).

The Illuminati appears to be in good hands as the writer will be Joshua Williamson, the author of my personal favorite ongoing comic book series of 2014, Nailbiter. He will be joined by artist Shawn Crystal who has penciled comics such as Deadpool and Arkham Manor.

The cover artist for the series, Riley Rossmo (Bedlam), also redesigned the characters on the team before Shawn Crystal became a part of the project. But Crystal added his own flare to the characters. Crystal commented onthe official Marvel website that “Riley and I are both kind of gritty, inky artists…. So it’s been fairly easy to adapt the designs to my style. I’ve added some of my special seasoning to them, which has been fun.” 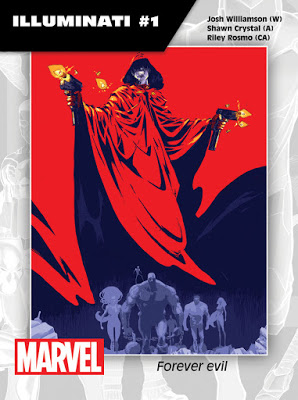 Crystal also confessed that this wasn’t his typical book, but he couldn’t escape Willamson’s plot. He commented that “I normally would run away screaming from a team book, but Josh’s plot reeled me in…. It felt right. I wanted to keep exploring dark, gritty subject matter, where I could push the expressionistic quality of my art, the dirty inks and heavy spot blacks.”

In the first story arc of the series, the team will be coming together and learning to work as one. Williamson talks in detail on the Marvel website about how much he was looking forward to seeing things from the villain’s point of view, mentioning that “Honestly I think it’s because it’s a perspective on that world that isn’t all the explored…” In regard to the tone of the books in questions, he said that “…when it is, it’s usually a funnier title, which I still love. But I wanted to show the darker, more serious side of things. It still leans on the black humor a bit. I remember being a kid and hearing that old saying: ‘A hero is only as good as its villain.’ And that stuck with me, fascinated me. And so I’ve had this obsession with the bad guys ever since. And now I get to play with a bunch of the Marvel baddies. It’s pretty awesome.”

The group is not the secret group of heroes that went by the same name in New Avengers. This is a new group of villains who want to keep their organization a secret to avoid capture. The members of the group include:

A former Ant Man, Black Ant is actually a life-model decoy (LMD) called Eric O’Grady who was previously brought back to life (par for the course in comics). However, O’Grady didn’t come back quite right…

Mad Thinker is an evil genius who’s bored with his life. Despite having a superiority complex, this evil-doer joins the team for the promise of change.

Thunderball, a member of the Wrecking Crew. Growing tired of his crew’s antics, Thunderball is joining The Hood once again.

Enchantress, the most mysterious member of the team. This Asgardian sorceress is known for toying with minds (especially Thor’s). Her reasons for joining the team are shrouded in mystery. It’s teased the Enchantress will become friends with the final member of the team, Titania.

Titania, the wife of the currently imprisoned Absorbing Man. She is rethinking her current role in life. She doesn’t really want to fight anymore, but The Hood manages to convince her that joining the Illuminati could lead to her having a new lease on life.

Of course, there’s also The Hood himself. Once a two-bit crook, his life changed when he found a magical cloak and boots. Having previously failed to lead a group, he doesn’t want to be the leader of the Illuminati but instead be their guide.

Despite the group wanting to avoid heroes, the book will inevitably feature some. The first issue will include the Heroes for Hire Iron Fist and Luke Cage. Many other villains will also be making appearances in the book but Williamson and Crystal didn’t want to spoil any names.

I’m a sucker for a comic book about villains. There are so many possibilities when it comes to members of the team that could be added, so many villains that can be played with! Hopefully the series can avoid going through the same pitfalls DC’s SuicideSquad series went through during the New 52. The series would introduce new characters every other week and then either kill them off or make them uninteresting. I want to see The Illuminati add a couple of surprise characters to their roster along the way and really make them stand out. Who would you like to see in The Illuminati? Let me know in the comments below.

The Illuminati #1 will be released in October 2015. Be ready for #MarvelOctober!