With a promising premise, I expect entertainment cubed from this title! While it hasn’t quite reached outstanding territory, this was a good start to what could become a great series. If it doesn’t fall to the clichés that are brushing at its panels…

For Kenny Logan’s eighteenth birthday he receives more than he thought possible: a cube that can transform matter into anything he can imagine. Unfortunately, a Nazi scientist wants the cube to take over the world (Of course!) and a government agent wants the cube to stop an oncoming alien invasion.

Aaron Lopresti (Planet Hulk, Wonder Woman, Justice League International, Detective Comics) handles both the writing and artwork in this issue with Hi-Fi Design doing the colors. Lopresti does a good job on both fronts. The idea of the cube has already fostered some creative imagery in this issue (stairs turning into a t-rex) and leaves the read anxious to see what Lopresti will do with it next. 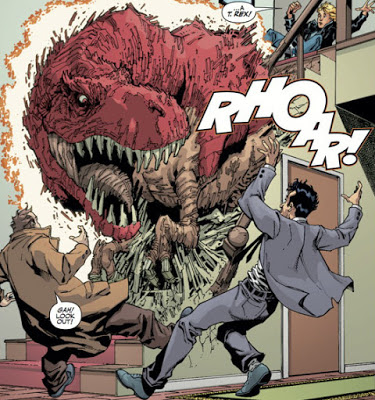 I found Kenny to be the perfect choice for the protagonist who receives the cube. He’s a teenage artist with a vivid imagination. Giving him the cube is the equivalent to giving Jackson Pollock a Green Lantern ring. The rest of the characters serve their purposes well. Kenny has a strained relationship with his father after his mother’s passing and I’m hoping Lopresti will further explore their relationship with each other. So far their interactions have been awkward and, because of that, they feel real. Kenny’s girlfriend Debbie is the typical supportive character whose dialogue is fine but doesn’t really do anything all that interesting in this issue. The villainous Doctor Cruel looks like he’ll make for an entertaining enemy. His henchmen, on the other hand, were a little too bumbling and their “humor” didn’t always hit.

Despite that this title does do a great job combining a coming-of-age story with science-fiction and comedy. In fact, I find the comic relief the most enjoyable aspect of this issue—when it hits. A lot of the characters and plot points seemed in danger of feeling very paint-by-numbers. The comedic relief serves as a good distraction from this. It would be nice to see more of it coming from the main characters though. Some of the best laughs that I had in this issue were thanks to Dr. Cruel’s assistant’s thought bubbles. There were also some plot points where I thought the story was going to go one way but it didn’t, possibly hinting at a more creative progression of the plot than the characters would seem to suggest.

Another issue with the story is the inevitable exposition dumps that are forced onto the reader throughout the issue. Usually Lopresti gives these to the reader in big chunks so they can get an idea of what is going on. Sometimes these felt a bit too forced. When Kenny is talking in his dream to his mother, her dream advice felt a bit preachy. Some of the exposition could have been more effective if it was delivered visually rather than through dialogue.

The first impression I got from the artwork when first starting this book wasn’t very positive. The scientist’s house is your stereotypical mansion and isn’t bad per se, but I really don’t like how the background is white. A rather frustrating faux pas I often see in comics is when the background is neglected for a bland color or, even worse, white. This issue does that several times. However, Lopresti’s art in this issue still has a lot of really nice qualities despite the initial neglect.

By far the most standout part of the artwork was splash page showcasing the depths of creativity going on in Kenny’s dream. Lopresti managed to cram a ton of ideas into Kenny’s head and still kept it appealing rather than cluttered on the page. This makes me anxious to see more of his work when the cube becomes a bigger part of the story. I want to see him really delve into the absurd.

The character designs also have nice little details. I didn’t even notice the first time reading but not only does Doctor Cruel have a Nazi armband, he also has a frowny face on the breast of his lab coat. The expressions on Lopresti’s characters are usually well done, really conveying their mood. Some of their expressions are off-putting though, such as Kenny’s when he is first experimenting with the cube. 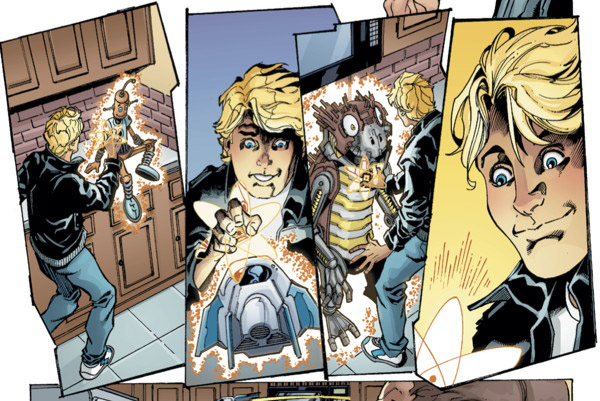 Lopresti does a solid job with the backgrounds of the panels most of the time. For instance, the scientist’s lab is nicely detailed with a Nazi flag hanging off to the side and other typical evil-scientist stuff.

There are a lot of good qualities in this issue that I could see being better expanded upon in future issues. The comic relief and the protagonist (plus his relationship with his father) are some of the more promising elements that I’m looking forward to experiencing again. There were a couple of problems such as the overload of exposition, the occasional joke that falls flat and the close to paint-by-numbers characters. However, with more time, I think this could series could develop into a fun romp that will leave you smiling… rather than this first issue which will leave you with half a grin.