Recently, HBO talked with Watchmen director Zack Snyder about possibly doing a television series based on the graphic novel. Watchmen is considered one of the greatest graphic novels of all time and the example most people point to when trying to make the argument that comic books are literature.

The news about HBO’s talks with Zack Snyder was covered by Collider, who originally heard about the story through their own sources. However, HBO confirmed the news by stating: “Preliminary discussions regarding Watchmen have occurred but we have no additional information and no deals are in place.”

It is not clear what the television series would be based off of. It could be based on the original Watchmen graphic novel, the prequel comic books that came out in Before Watchmen or a sequel. My favorite option would be a Before Watchmen series. Sure, a lot of the books were fillers and forgettable (Dr. Manhattan), but there were a some stand-outs that I would love to see get more exposure (specifically Moloch, Minutemen and Ozymandias). A sequel is also highly unlikely with all the material they already have the option to adapt to the small screen. 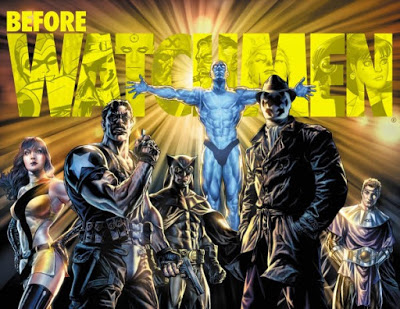 I think HBO also knew not to contact the original creative team on the Watchmen book since writer Alan Moore (Swamp Thing, V for Vendetta) was vehemently against Watchmen being made into a movie in the first place. He often talked extensively against the Watchmen movie. Before it came out he told Geoff Boucher of the Los Angeles Times: “I find film in its modern form to be quite bullying…. It spoon-feeds us, which has the effect of watering down our collective cultural imagination. It is as if we are freshly hatched birds looking up with our mouths open waiting for Hollywood to feed us more regurgitated worms. The ‘Watchmen’ film sounds like more regurgitated worms.” Unfortunately for him, he would have no say in an adaptation of Watchmen anyway since he does not have the rights to the characters.

HBO is responsible for programs such as Game of Thrones and True Blood. Despite running Game of Thrones, sci-fi and fantasy are not the usual genres for HBO. They usually have more programs that fall under the drama genre. However, with the ratings for Game of Thrones so high and superhero movies and television shows coming out left and right, it’s not surprising that they would consider making a Watchmen TV series.

Zack Snyder is also no stranger to the superhero genre. Not only did he adapt the Watchmen graphic novel to the big screen but he also directed Man of Steel and is directing Batman v Superman: Dawn of Justice. I have run into people who love his work or who hate it… but usually the ones who hate it really hate it. The film version of Watchmen is often panned by comic book fans for the ending which was changed from the original graphic novel for the movie.  (We all mourn the loss of the Squid.)

So what do you think of the news that Watchmen might be a television show? Are you excited or do you think they’re feeding us more regurgitated worms? And if they do make the television series, would you prefer a recreation of the original graphic novel, a prequel or a sequel? Let me know in the comments below.