This week I’m showcasing the Kickstarter for the mature science-fiction thriller Fractal No. 1 – Waves in Tyranny. I also spoke with the writer about Fractal being his first comic book project.

The series takes place in the distant future. Most people use technology for weird entertainment purposes while the government abuses the power of technology (reminds me of the current generation). After two terrorist attacks, a TSA agent by the name of Bryce and an underground hacker named Sasha find out a secret and start revealing it to the world. But the government has numerous new secret technologies created to control alternate dimensions. Will they put a stop to Bruce and Sasha’s crusade? Find out in Fractal.

The writer of the series, Daejuan Jacobs, is a newcomer to the comic book industry. He is a full-time student and works part time in an electrical power distribution field. The illustrator is Marco Turini. He has worked for several publishing companies including Marvel, DC, IDW Publishing and Top Cow. The projects he’s worked on in the past include Cyber Force, Legends of the Dark Knight and V-Wars. 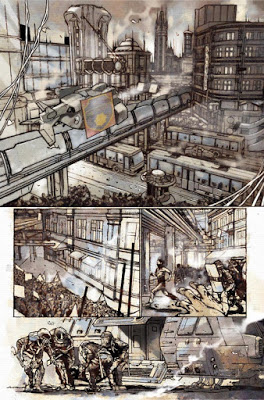 This Kickstarter is for the first issue of a six issue story arc. It has 32 pages illustrated in watercolor. The writing is complete but the final drawings are still in progress. The money will be used to send the comic book to printers and then to send the completed product out to backers.

UPDATE: The Kickstarter for Fractal #1 was actually cancelled. A new artist was hired for the project and it will be published digitally soon. A sneak peek can be seen here.

I spoke with the creator of the project and one of the founders of Legends Universe, Daejuan Jacobs:

Me: The idea behind Fractal sounds somewhat similar to real-life concerning the current who use technology for entertainment that may seem bizarre to others as well as a government that some people see as abusive in their use of technology. Is Fractal meant to mimic or was it inspired in any way by real-life events?

Jacobs: I think one of the best ways for a story to relate to people is for it to highlight real life issues. I have always enjoyed works that strike close to home in one sense or another. Fractal is inspired by the real life political, social and economic issues we are facing right now in the United States. I wanted to explore the consequences of such issues being left unfixed in the future.

Me: What actual events were most influential on the story of Fractal?

Jacobs: I think it is hard to ignore what the Snowden leaks uncovered in regards to the NSA. Secret courts, secret programs and almost unlimited authority all given to them by Congress while being funded by tax dollars. This is similar to what we will see in Fractal, and it does not go so well for the general population.

Me: You gave Bryce’s relationship with his parent’s a lot of time on your Kickstarter page. Can you talk a bit about the significance Bryce’s parent’s play in his life?

Jacobs: As kids, we are greatly influenced by our parents and guardians while growing up. Like most boys, Bryce looked up to his father and took on certain personality traits, for better and for worse. The quest for knowledge was a strong belief held by his father, and he was constantly instilling this into the young mind of Bryce. This is a large reason why Bryce excelled in college. Though having an above average intellect mixed with confidence that is borderline arrogant does not go over so well. His mom was very much a humanist and was concerned with the well-being of the state of the nation. Neither of his parents cared to show their emotions, which shows a lot with Bryce.

Me: You also gave Sasha’s parents a lot of detail in your description of her on your Kickstarter. Can you talk about her parent’s role in her life?

Jacobs: Sasha’s parents played a different role in her life compared to Bryce’s parents. At an early age, she saw the negative qualities of her dad and what caused them. Her dad was very successful in his career as a politician. In the beginning, he was dedicated to serving the people and fighting injustice. But after rubbing shoulders with lobbyists and career politicians, he shortly became one of the rest. His success was a result of backdoor deals and bribery common in the political system. Sasha saw the change of a good man turned bad by the system he was a part of while her mom stood by and pretended everything was fine and that it was just how things were done. Sasha was determined to fight the corruption and injustice within the government.

Me: What is a typical day in the world of Fractal like for the average citizen?

Jacobs: Most people commute to work or school via public transportation. The average person works multiple jobs just to stay above the poverty line since upward mobility is at an all-time low. People are normally too busy staring at their smart phones to care or fully realize how their society is deteriorating. After a typical weekday, most go home to watch their favorite television show or browse the Internet and post on social media. A weekend for an average citizen is usually spent at the local bar or wandering the city streets looking for something to take their mind off the stressful week.

Me: How did you come to work with Marco Turini?

Jacobs: I posted on an online forum related to comic book creators. He replied to the post and we talked through email. He had done science fiction work before and developed an eye for designing the universe I had in mind. After all was said and done, he was interested in the story and we were looking forward to collaborating on the series. 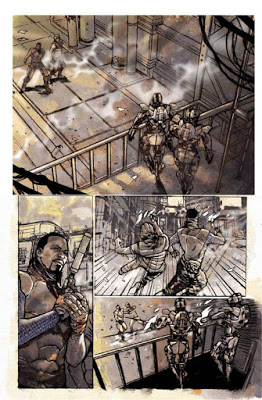 Me: How would you describe Turini’s artwork in the book?

Jacobs: In one word, striking. His artwork has emotion and is very aesthetically appealing. I picked Mr. Turini because of his attention to detail and watercolor art style. He has an eye for finding which panels should be the focal point in my script.

Me: What is the number one reason you think people should back your Kickstarter?

Me: Why did you decide to become a comic book writer?

Jacobs: I have always enjoyed reading and writing. Comic books were my favorite thing to buy at an early age, and I have always wanted to tell stories. So it only makes sense for me to start writing comic books. This gives me the ability to do something I am passionate about while both attending school and working. 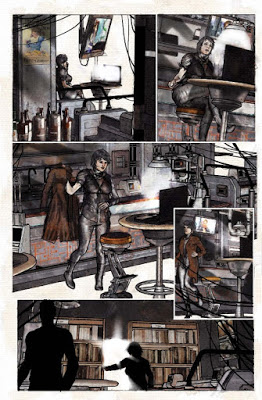 Me: How do you manage your time as a full-time student working part-time in an electrical power distribution field and writing?

Jacobs: Honestly, a lot of caffeine. I like being busy, there is nothing I hate more than not staying active. You get more out of life by actively seeking to make yourself better and exploring new avenues. My motivation to not be mediocre keeps me on track with such a busy schedule.

Me: Why did you and your wife start Legends Universe?

Jacobs: We wanted to be an organization that supports local creators in the pop culture area. The best way to do that in a city like Chicago is to start a business. This allows us to maintain an organization while having creators as legal members.

Me: What are some of the previous projects that Legends Universe has been a part of?

Jacobs: This will be our first comic book series.

Me: What are your future plans for Legends Universe?

Jacobs: We want to have a company owned by creators of comic books, webcomics and various other entertainment media publishing comics and maintaining a local pop culture entertainment store right here in Chicago. 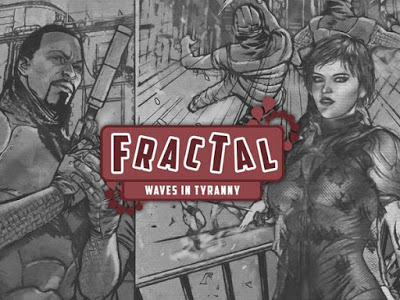 Jacobs: With the abundance of resources available on the Internet, as long as you trust yourself, you will be able to accomplish your goals as a writer. Do not doubt yourself.

Me: Thanks for your time Daejuan. You can back Fractal #1 on the official Kickstarter page here.

Age of Revolution: Volume One