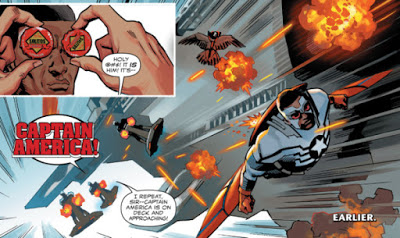 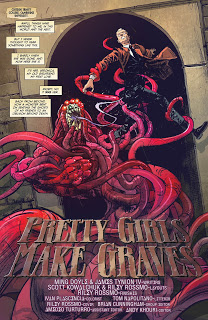 Riley was back! The art had that shiny style again that I missed, not that I didn’t enjoy issues 3 and four’s art style. I’m always invested in self-deprecation characters with all kinds of hatred, hence why I love reading Constantine so much. I am throughly enjoying Constantine making comments about all of his ghosts and his over all fuck ups. I’m just so happy it has the same ‘voice’ of the original Hellblazer comics that made me fall in love with this character and the world he lives in. This new run is just a shinier version that I can’t wait to have in trade instead of a bunch of individual issues. Also, HELL YEAH for Veronica having dated Constantine and Georgina, I see she had a type. Loved that ending, it was just such a Constantine thing to do.
What I liked most: The awesome Veronica and Georgina flash backs. Also love the Void stuff with witches/warlocks needing to do magic, that they can’t just have one foot in, one foot out. It’s such a cool concept to see in the comic.
What I disliked most: SHE’S GONE!!!!
Favorite Quote: Little is unknown though much is unlearned. And
”Do you wish a cure or an end?”
”Which is better?”
”They are often one and the same John Constantine.”
Favorite page: Page 8, at least that’s what it was with the amazing PDF Jay sent me. it might be different with the physical copy. The Veronica park page scene. 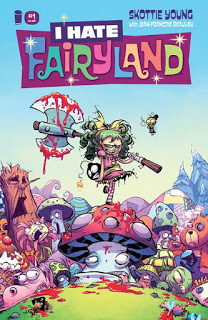 Yesss the people behind the adorable tiny Avengers series did the art for this!  This was such a fun and crazy comic and I loved everything about it. Congratulations Skottie Young on your first creator owned comic! Gert is adorably violent and I’m all for adorable violance! I don’t know what the rating is but I kept on thinking it was some kids comment and I was also like ”WHY ARE CHILDREN READING THIS?! I GET WHY IT’S CENSORED IN CASE THEY DO BUT NOO LET THIS BE FOR THE 20 SOMETHING YEAR OLDS THAT WANT WEIRD VIOLENCE!”

What I liked most: The casino scene.
What I disliked most: ENDING, boo, I want more now.
Favorite quote(s) ”I AM THE HIGH TELLER IN THE SACRED GUILD OF NARRATORS!”  and ”I go shopping for one hour and you rob a casino?”
Favorite page: page 11!
Grimm Fairy Tales #115 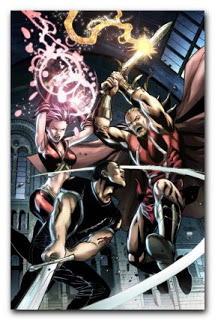 Ha, so Lance is that Lancelot. Cute, very cute. This is a comic that just makes me scream X-MEN, IT’S LIKE X-MEN! But I can only judge X-Men from the movie verse and not the comics because I have yet to dive into that world. This was a cool comic, nothing totally mind blowing but still a fun read. I really do enjoy the art style of this series and Zenescope is coming a quick favorite of mine. I loved how done the Professor was with Lance running off.
What I liked most; Lance’s flashback story dream sequence thing on the buss.
What I disliked most: Kind of predictable ending with the villain being outside the grounds of the school.
Favorite quote(s) Stories are such fragile things. As are necks.
Favorite page: The page right before the last one with Mary and Ali. 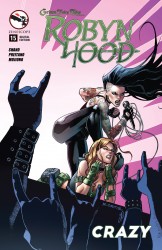 Cornell Terrance was a super cool character. Marion and Robyn bantering over helping Cornell and Katie was adorable. I’m all for fangirling over people. I really enjoyed the hard core Buffy vibe this issue had. Robyn needs a hug and more coffee. And I need her orange arrow hoodie In purple. Over all, I really liked this comic. What I liked most:  Marion fangirling over Katie. What I disliked most: Egg monster thing. Favorite quote(s) “It’s flattering to md that anyone gives a shit. Every selfie makes me smile.”Favorite page: 20/ the “Katie Graves almost just broke my ankle. How many woman can say that?” page. 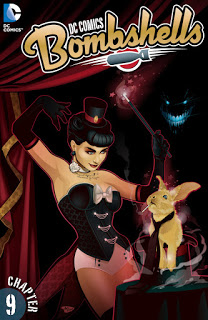 So, Joker chick is interesting? I liked the art for it but story wise I wasn’t all that impressed. I just came for bunny John Constantine really. It wasn’t all the impressive but I loved Constantine with his lighter and cigarette.
I love Batwoman though, I’d read an entire trade of this style art for her alone. Harper was super cute and her car budy coworkers. Mags and Kane were priceless on there date. As was Kimiyo and Barda. Also CATWOMAN. Can the series just be on Batwoman”s adventures because I’m 100% okay with that. What I liked most:  Batwoman’s comic. What I disliked most: Sadly Wonder Woman’s story. Favorite quote(s) “I do not think there is a city in the world where its people do not feel loneliness.”Favorite page: Ending of Batwoman’s comic. 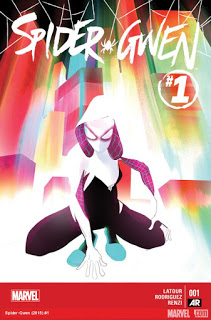 BODEGA BANDIT! Man I wish I was in the writers room when that happened so I could hug whoever said it. Gwen is adorable and I want to hug her as well. Go be responsible! You got this girl! Go run on top of police cars.
Gwen is such a fun character and the Peter twists were great. I think this is easily going to be one of my favorite comic series. I really get why Kat is such a Spider-Gwen lover.
I also throughly enjoy the Marry Janes band stuff as well even though it’s kind of a reboot.
What I liked most:  THAT PLOT TWIST What I disliked most: Poor Osborn. He’s always fucked. Favorite quote(s) Um. No I mean maybe. I mean, define sirens.  Favorite page: The 4th to last page. 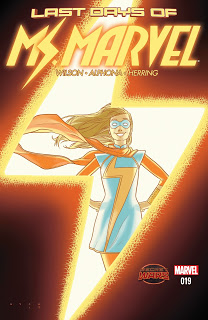 Awww Kamala’s mom, awww, feelings guys and girls. That’s what I have. This entire issue gave me massive happy feelings and caused a lot of “aws” to be said out loud.  This was such a cool series and I’m happy I got to read some of it before it ended/rebooted.
What I liked most:  Kamala and Bruno’s heart to heart.
What I disliked most: The damn relaunch that I’m now apart of reading..
Favorite quote(s); Sometimes you have to face the end of the world to find the beginning of something better.
Favorite page: THE DANCE SCENE! 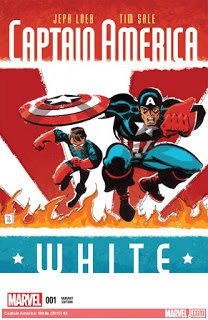 Badass woman, Captain America and a young Bucky Barnes is really all I need to be happy with this series and that’s exactly what I got. I got an adorable circus crew style French informant group, Nick Fury getting an eye patch, The Howling Commandos and Bucky with Steve working together. I throughly enjoy reading Steve’s monologue’s over all of the action reflecting over Bucky and feeling guilty. It’s far from happy but it feels very ‘real’ to me.
What I liked most: The eye patch scene.
What I disliked most: Cliff hanger…
Favorite quote(s): Bucky telling Steve the French informant likes him.
Favorite page: The last page was awesome.
Uncanny Avengers #1 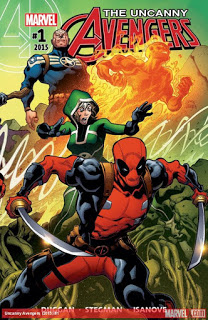 Have you ever read a comic or watched something on TV and went ”What were the writers on when they decided to write this?” Deadpool, Spiderman, Captain America, Rogue, Johnny Storm and Synapse. I have no idea who Synapse is but Synapse was pretty cool. The art was more my style preference but story wise I wasn’t all that impressed.  I enjoy Rogue no matter what and I liked how tired of Deadpool she was as well as Spiderman. Don’t get me wrong, I enjoy Deadpool but the blown up popularity makes me groan a bit sometimes.  I feel like I’m going to keep on reading the series just out of sheer curiosity to see how it all plays out.
What I liked most: The press scene with Steve trying to act like Rogue didn’t just trash talk In-Humans.
What I disliked most: The ending, pretty lack luster.
Favorite quote(s): Rogue’s quote on wanting to kill Steve.
Favorite page: Pietro’s dating sequence. 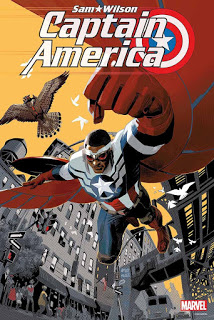 SO, I haven’t read any of the previous Captain America Sam Wilson comics but I have wanted to for awhile. The art for this comic was interesting for me and grew on me as it went on. It made me think of the SHIELD comics that are going on right now as well. Sam has become one of my favorite Marvel Movie verse characters. Anthony Mackie is such a cool guy so it was fun reading this comic and basically hearing Sam/Anthony’s voice in my head. I can’t wait for issue #2!
What I liked most: That little sweat drop of frustration from Sam on the airplane. Oh and the fact Maria has a freaking swear jar.
What I disliked most: I wanted more of the crazy plain ride but that’s just me.
Favorite quote(s): And yeah, my bird has a sonic cannon now. Doesn’t yours?
Favorite page: The last page, super awesome cliff hanger.
Guardians of the Galaxy #1 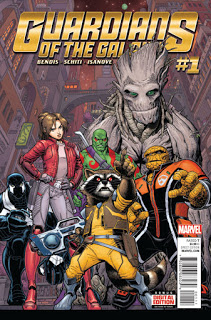 The Thing is an adorable ball of rocks and should be protected at all costs. This comic felt very ‘Star-Lord and Kitty Pryde” to me. The art style was fun and the over all team in this comic looks like it will be a fun one to read. This was a team of characters I know thanks to the Marvel movie world and a few of the other comics Kat and Jay have sent me. It was a fun, fast paced comic that left me wanting the next issue now instead of patiently waiting until November for issue #2. I’m all for more Kitty Pryde and Star-Lord adorableness or in this case, bitter ‘screw you”-ness.
What I liked most: KITTY PRYDE AS STAR-LORD!

What I disliked most: IT ENDED!

Favorite quote(s): THE NEGATIVE ZONE: If you know anyone from here you’ve made a huge life mistake somewhere.

Favorite page: The ”Do the thing” page.
My Rankings & Ratings for the week: