Originally a webcomic, Switch #1 is the brainchild of Stjepan Sejic, an artist on Witchblade who created his own alternate Top Cow universe featuring the Witchblade, the Darkness and the Angelus (so far). While there is almost too much going on in this issue, it is a pretty fun start to what could be a very interesting series.

Switch #1 is set in an alternate universe where the Witchblade has chosen a new bearer, teenage UFO seeker Mary. The origins of the Witchblade and one of its previous bearers, the first Witchblade bearer Una, are also explored. The plot also focuses on the future Darkness bearer Tony Estacado and his guards as well as the Angelus.

A lot is established in this issue and it isn’t overwhelming, though it is on the cusp. The opening history of the Witchblade is interesting and it was cool to see the first Witchblade bearer. It is almost too well-established in that I kind of wish there were more mysteries, but the first issue does leave us with a couple of questions that I’m looking forward to seeing answered.

The element I find the most intriguing is how the Witchblade works in this universe. It taps into the powers of the previous bearers who actually interact with each other and Mary. The issue makes me interested in finding out more about these characters and the extent of Mary’s abilities, as well as how she and the rest of this universe will react to her powers. Stjepan sets the issue up in such a way that these thoughts are on my mind.

My favorite character in the story has to be Mary. She isn’t your typical Witchblade bearer but a geeky teenage girl who gets zits and obsesses over UFO’s. She’s written as both a relatable character as well as a unique one. Her dialogue with her friend Rudy is also really entertaining. They feel like teenagers and don’t have any faux teenage speech that some writers fall back on. Seriously, did anyone ever talk like Juno? 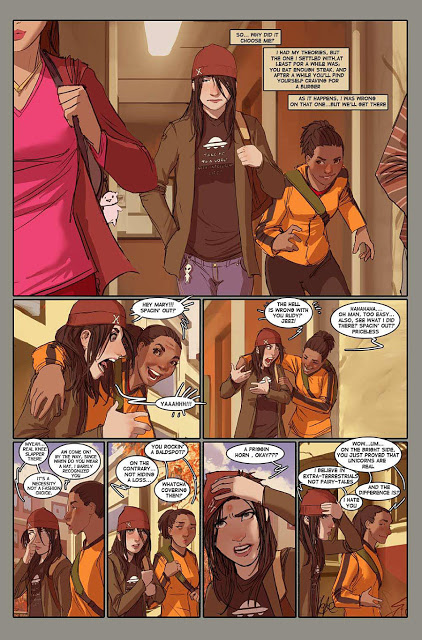 Stjepan Sejic is one of my favorite artists and his work here is great as usual. However the artwork here has a very different feel to it than the work Sejic did on the original Witchblade series. In the original Witchblade his artwork had a lot more detail and beautiful scenes. In this series, his style is a bit less detailed, which works somewhat to the book’s advantage because it makes the issue feel more like it takes place in an alternate universe. Some of the faces look like quick, slightly scrunched sketches. However the skin tones, with their realistic hues, are a highlight of the artwork. Then there are the animated expressions on characters’ faces which really add to the dialogue. It is still well-drawn (with a few facial exceptions), but definitely don’t expect the same level of artwork that was in his Witchblade run.

This is great for newcomers to the Witchblade and other Top Cow series. Obviously, if you’re a purist for the originals who won’t accept alternate interpretations, you probably won’t enjoy this issue. But it seemed like it was easy to have trouble keeping track of everything in the original Top Cow Universe related to the Witchblade, the Darkness and the Angelus since there are several hundred issues to read through. This series does a great job bringing them all together. I could see this as a gateway series into reading more Top Cow comics and the start of an interesting alternate universe that I could see a lot of spin-offs to. 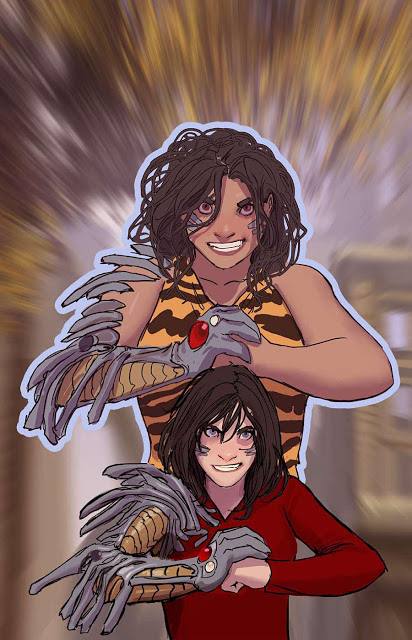 For its interesting but cluttered story, relatable protagonist and artwork that had its moments but sometimes left me wanting more, I give Switch #1 a 7.5/10.