Black Magick #1 is the most promising start to a new series that I have read all year. On every level this issue hits its mark and I wouldn’t be surprised to see it on some of the best lists inevitably made at the end of this year.

Rowan Black is both a police officer and a witch. She’s called away from a gathering to confront a hostage taker who is specifically asking for her. What does he want and will people have to die in order for Rowan to find out?

It’s hard to say more about the plot without giving anything away. In fact, that’s the only complaint I have about this issue. On paper, not a lot happens in this issue. The reader is given a lot of mysteries but little progression of plot which is to be somewhat expected since this is a debut issue. 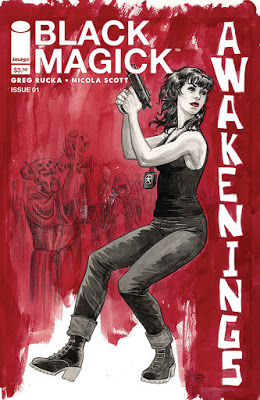 Starting us off with a little witchcraft and then switching to a hostage situation, Rucka immediately gives us a peak into the life of Rowan Black by showing how her world of spells and guns overlap in problematic ways. It’s impressive that the entire issue basically revolves around one event happening at one location with the exception of the first couple of pages while still managing to be interesting throughout. The fact that this is a hostage situation makes the entire issue feel tense.

While Rucka’s story here is great, I love Nicola Scott’s artwork even more. Every panel is drawn beautifully with great detail put into characters’ faces that really make them distinct from one another and interesting to look at. This means their emotions also come through wonderfully. When the hostage taker looks stressed, you can see it in his eyes… and in the sweat pouring off his face. Even the backgrounds are given some a great level of detail. The shading also plays an important role in the artwork and gives it an almost expressionistic look that I would love to see emphasized even more in future issues. 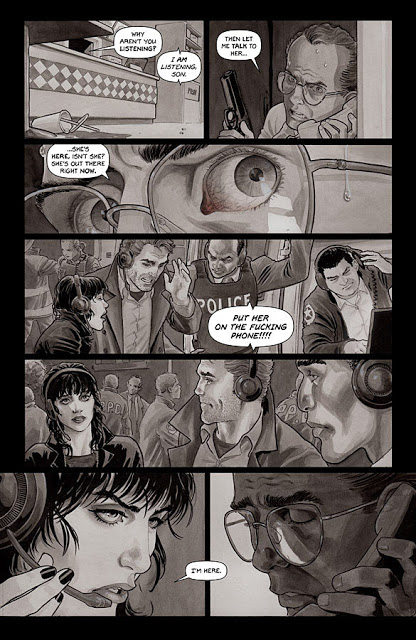 Colorist Chiara Arena mostly uses black and white in this issue and I’ve never seen black-and-white artwork used to as great an advantage as it was here. The lack of color sets the mood perfectly for the series, really adding to the artwork. When other colors are used, it’s usually very subtle and always adds to the panel. One example is in a panel that is a close-up of the hostage taker’s eyes with red veins. The best instance of color was during a two page spread towards the end of the comic which is one of the best moments of interior comic art this year.

This was a truly spellbinding read both because of the fascinating story set up by Greg Rucka and the intense, mostly black-and-white artwork by Nicola Scott combined with the subtle color touches of Chiara Arena. I give Black Magick #1 a 9.3/10.